Key city figures back protest calling for deal to save Cowley 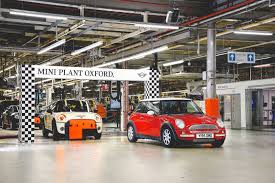 Key figures in Oxford’s community, academia, local government, Labour and business have welcomed UNITE’s new campaign for a Brexit deal. Several major car manufacturers have issued dire warnings of the consequences for the UK industry of a no-deal outcome. Their comments came in support of a planned event at Cowley where local pro-European activists gathered on 7-8 October to say no to no deal, demand a good Brexit deal for the UK car industry, talk with UNITE members at Oxford’s biggest industrial employer, the BMW Mini plant, writes Colin Gordon.

Will Hutton is one of the leading economics commentators in the country and a former Principal of Hertford College, Oxford and editor-in-chief of The Observer. He said: “It is not just a question of avoiding a No Deal Brexit – it is about securing a deal that allows BMW and its supply chain to operate as they do now. As matters stand we are far away from that, and UNITE workers at the Cowley Plant need every ounce of support in their fight for their jobs and their future. This is not what Leave promised in June 2106, when they dismissed what could be happening to Cowley as Project Fear. They must be made to deliver on their promises.”

Richard Corbett, former MEP and leader of the Labour Party in the European Parliament, said: “We were told that Brexit would be easy, would help the economy and would not disrupt our supply chains or exports with the EU. Johnson said he had an “oven ready” deal. It’s turning out to be half-baked, endangering jobs and livelihoods and the very existence of British manufacturing. We desperately need a deal that keeps our unfettered access to the European market and minimises the bureaucracy that will arise from leaving the European customs union. And we need it quickly!”

Julie Ward, former Labour MEP and leading activist in Another Europe is Possible said: “The Mini in its past, present and future incarnation is a symbol of the best British design and innovation. It is unthinkable that the Conservative government would risk us losing the base for its ongoing production. Brexit in any form is harmful but a no-deal will be devastating for communities like those clustered around the BMW Cowley works. It’s time for the government to put jobs and communities before ideological posturing and admit that we need a good deal with the EU, one that benefits our hardworking communities.”

John Howarth, former Labour MEP for south-east England with his office based in Cowley, said: “The success of BMW Mini at Cowley has been based on European partnership and an effective cross-border supply chain. It is appalling that a Conservative government is willing to sacrifice UK production of an iconic British brand on the rock of an ideologically motivated ‘no deal’ Brexit in which communities like those reliant on Cowley will suffer. There is no doubt that a deal can be done if Johnson and Gove are willing to negotiate seriously.

Dr Peter Burke, chairman of Oxford for Europe, said: “We always knew that leaving the European Union would be difficult, complex and painful. Not even the experts, and certainly not the government, realised just how painful it would be, occurring against the background of the pandemic. The government is continuing to grandstand and make vacuous demands which in its heart of hearts it knows the EU will not agree to. It’s just playing chicken with the lives and livelihoods of people in the UK manufacturing sector, including BMW. There needs to be a deal which safeguards not only exports but supply chains. Otherwise companies like BMW will relocate to where the majority of their output is sold, i.e. inside the EU single market. We need to do everything we can to stop that from happening.”

Sue Wilson, chairwoman of the campaign group Bremain in Spain, who took part in the rally, said: “I grew up in Cowley and my dad worked at the car factory for almost 40 years. It’s as much a part of my heritage as it is of Oxford’s and it’s under severe threat. We were promised the easiest deal in history and frictionless trade. Instead, we are on a dangerous path to economic harm, and it could all be avoided. Make no mistake – no deal would damage the car industry, and the economy of Oxford, and the UK, for years to come. It must be stopped. No deal would not just be a massive government failure, it would be their choice.”

Former Oxford city council leader Bob Price said: “Motor companies across Europe face losses of £100 billion over the next five years if the government fails to reach a trade agreement with the EU this month. Tariffs, regulatory checks and other trade barriers will disrupt closely linked supply chains and add crippling costs that are likely to mean closures and job losses across the 100 production sites in the UK. The impact on Oxford’s economy would be devastating.”

UNITE the union, said on 2 October, launching its ‘Get a Deal’ campaign: “While we are no longer a member of the EU, it remains our largest trading partner and the future success of many of our industries depends on getting our new relationship right… We need a deal that allows factories to continue to receive the components they need to create the products our members produce… Take one industry, automotive. It relies on 1100 trucks delivering parts from Europe every day for it to function successfully. Now truck drivers carr ying those components and other goods to and from Europe face the prospect of border chaos, delays and even fines… Our very deep concern now is that with only weeks until we leave, a deal on decent terms will not be forthcoming. That is why we are urging our members and their families to put pressure on those who can deliver on the deal that’s needed. The Covid-19 crisis has endangered our health and caused deep harm to our economy. There is every risk that our country could experience its worst recession in 300 years. A bad Brexit deal or no Brexit deal will make things worse for working people. So our message to the government and to MPs is clear: Get a Deal.“

From Sunderland to Oxford, local actions are continuing at car plants across the country to urgently highlight the No-Deal threat to 800,00 jobs.

Speaking to a packed audience in Oxford Town Hall on the night of Brexit, 31stJanuary 2020, the former lord mayor and council leader Bob Price said: “The Cowley car plant has been a bedrock of the Oxford economy for more than a century. The Mini is a global icon – nearly 80% of the 200,000 cars that roll off the line at Cowley each year are exported. They make a major contribution to the balance of payments. 4,000 well-paid jobs depend on the plant directly together with another 1,500 jobs at the engine and parts plants in Birmingham and Swindon, not mention the many thousands of jobs in the wider supply chain. All this is at risk after today.

“BMW operates across Europe with an integrated supply operation from Slovakia to the Netherlands and the components in a Mini assembled at Cowley and other BMW models assembled elsewhere may cross the UK border 3 or 4 times during the production process. Frictionless trade in the customs union and single market is an absolute essential. If the trade agreement that will be negotiated this year does not eliminate border checks, and does not commit the UK to alignment on environmental, labour, and safety standards. Millions will be added to production costs at Cowley and the plant will quickly become unviable.

“BMW wants to stay in Oxford, Plant Oxford is the Heart of Mini. But the loss of the single market and customs union makes it more likely that any future investment by the foreign car makers who dominate the UK market will be in the EU27 not the UK. The relatively small UK market for Minis could be supplied from mainland Europe. We need to raise an urgent alarm in our community. Brexit puts the whole future of Oxford’s car industry in serious danger.”