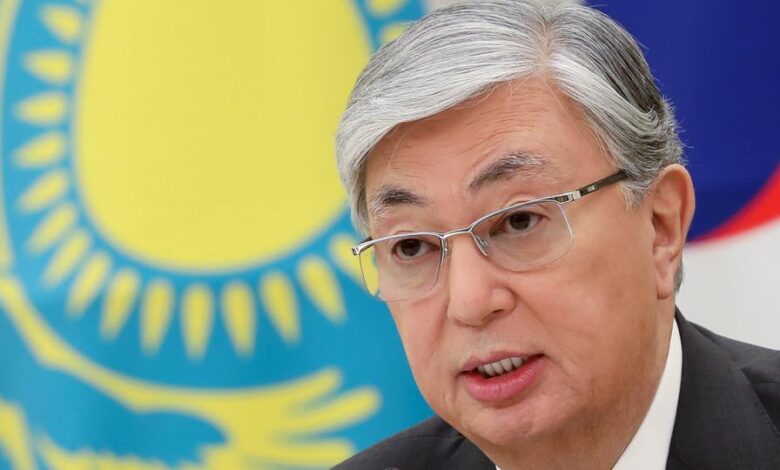 Under the chairmanship of the head of state, a working meeting of the Council of Foreign Investors under the president of the Republic of Kazakhstan was held in the format of a video conference. During the event, divided into two sessions, measures to restore economic and investment activity in Kazakhstan in the context of the coronavirus pandemic, as well as issues of developing and increasing the investment attractiveness of the country’s oil and gas sector, were discussed in detail.

Welcoming the meeting participants, the head of state said that the global pandemic has had a negative impact on almost all spheres of life of countries, and noted the importance of joining efforts in the fight against its consequences.

Kassym-Jomart Tokayev (pictured) expressed gratitude to the companies in the Council, which did not stand aside during this difficult period for Kazakhstan, and provided significant assistance to their business employees, to the social sphere and to the citizens of the country.

According to the President, the state has taken a set of unprecedented measures during the pandemic to support businesses and the population, which made it possible to reduce the negative consequences of the crisis and avoid a serious economic recession.

He also pointed out the need for serious transformations and reforms aimed at increasing investment attractiveness, ensuring transparency and predictability of government policies. To achieve these goals, Kassym-Jomart Tokayev put forward a number of proposals and initiatives.

As the first task, the head of state outlined the creation of new investment instruments. For this, in accordance with his instructions, the mechanism of the Strategic Investment Agreement has already been developed, which will ensure guaranteed stability of legislative conditions on the part of the state for the entire period of its validity.

Kassym-Jomart Tokayev also focused on the need to improve the business climate in the country. The government will prepare a new regulatory system. All control and supervisory, permit and other regulatory instruments will be subject to a large-scale audit.

The president also focused on the issue of ecology, informing the foreign participants of the meeting about the development of a new Environmental Code, prepared on the basis of the innovative approach of the OECD member countries.

“Enterprises that have implemented these technologies will be exempted from emission fees. Let me emphasize that such a mechanism, when the state shares environmental costs with enterprises, does not exist in every country. In fact, this is a large-scale public-private partnership project. We deliberately chose this approach. We expect that the businesses will fully fulfil its part of the agreements,” Kassym-Jomart Tokayev said.

The head of state also highlighted the possibilities of the IT sector, which, in the face of the negative consequences of the pandemic, provided a powerful incentive for the accelerated development of the digital economy. According to him, the development of the domestic IT industry, where Kazakhstan plans to attract at least 500 billion tenge within five years, requires serious support from global technology companies.

“Today, about 6% of the world’s digital mining is concentrated in Kazakhstan. In addition, the development of the IT market, engineering and other high-tech services opens up serious opportunities for export. We plan to attract investments from major global players in the field of cloud computing and platforms. Preparatory work has begun on the construction of four mega-data processing centres – in Nur-Sultan, Almaty, Shymkent and Atyrau. They have colossal computing power that will be located on a large international information highway,” the head of state noted.

Kassym-Jomart Tokayev stressed the importance of developing the domestic pharmaceutical industry. The president said that by 2025 Kazakhstan expects to increase the share of its own pharmaceutical production in the country to 50%. In addition, the production of medical equipment and consumables will be actively developed. These areas are open for investment, and such projects, as was noted in the speech, will receive full support from the state.

Within the framework of the event, issues of development and improvement of the investment climate in the oil and gas sector were separately discussed.

Addressing the participants, the president noted that this industry has become a driving force in attracting foreign investment to Kazakhstan. The development of this area has contributed to the rise of new sectors of the economy, such as oil refining, petrochemicals, oilfield services, pipeline and sea transportation.

Kassym-Jomart Tokayev believes that in the face of declining demand for oil and a decrease in the investment attractiveness of this industry, a difficult adaptation to new realities lies ahead, and a significant part of this adaptation will be associated with state policy.

In this context, the head of state called for joint efforts to address a number of important tasks.

Kassym-Jomart Tokayev pointed out the importance of the timely completion of large oil and gas projects at the Tengiz, Karachaganak and Kashagan fields. In particular, the President instructed to timely implement the transition to the full-scale development of Kashagan and accelerate the implementation of the project to build a gas processing plant at this field.

The president also drew attention to increasing the investment attractiveness of geological exploration. He instructed the Government, together with oil and gas companies, to improve the sectoral regulatory framework, taking into account the current realities and vision for the future development of the industry.

Focusing on the prospects of the oil and gas chemical industry, the president expressed the opinion that success in promoting this area can significantly change the specialization of Kazakhstan.

“The ministry of energy should think about the possibility of providing special conditions for the production and export of oil and gas for companies willing to invest in refining projects,” Kassym-Jomart Tokayev said.

In addition, the head of state noted the importance of environmental protection and the development of a low-carbon economy. He recalled that in 2021 a new Environmental Code will come into force in line with advanced international standards. The president urged interested stakeholders to contribute to the development of this extensive policy document.

Summarizing his participation in the event, the president assured that all the proposals and requests made during the meeting will be carefully worked out by the government and will be taken under its personal control.