You might think, with all the drama surrounding Huawei this year, that it would have lot market share. But, according to market tracker Dell’Oro, the opposite is true, writes Scott Bicheno. 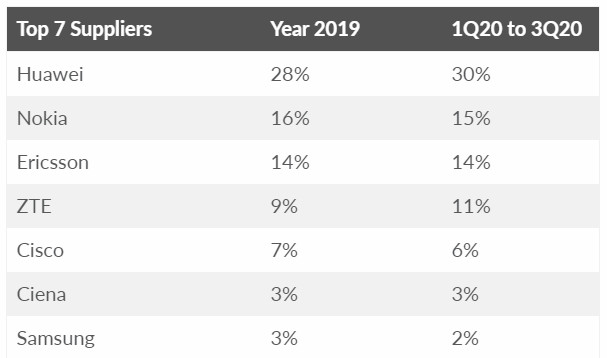 Pongratz also noted that telecoms continues to out-pace the broader economy. “The overall telecom equipment market continued to appear disconnected from the underlying economy,” he wrote. “While the on-going transition from 4G to 5G is helping to offset reduced capex in slower-to-adopt mobile broadband markets, we also attribute the disconnect to the growing importance of connectivity and the nature of this recession being different than in other downturns improving the visibility for the operators.”

All this serves as a reminder of the sheer size and importance of the Chinese telecoms market. Judging from a report by China Daily, there’s little sign of that changing next year. It spoke to Wu Hequan, an academician at the Chinese Academy of Engineering, who reckons China will build over a million 5G base stations next year, taking the grand total to 1.7 million by the end of the year.

Even allowing for the fact that Wu and China Daily both know better than to deviate from the approved CCP narrative, this seems like a plausible projection. If anything, the aggro with the US will have made the Chinese state all the more determined to ensure its domestic telecoms industry goes from strength to strength and we wouldn’t be surprised to be writing a similar report in a year’s time.