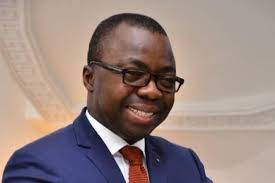 Due to the continued imprisonment of two prominent opposition leaders, the Brussels-based Human Rights Without Frontiers has filed a report with United Nations ‘Universal Periodic Review (UPR for Benin) highlighting human rights violations in the country writes Willy Faautre.

The report examined the case of Joel Aivo and Reckya Madougou, two prominent opposition figures, who were sentenced to respective 20 and 10 years imprisonment. It expressed concern that they weren’t included in a 17-person list due to be temporarily released following a meeting between Thomas Boni Yayi (former President of Benin) and President Patrice Talon on 13 June 2022.

HRWF submitted details to UN’s UPR for Benin. It included information about Reckya Madougou, who was sentenced at 2021 to 20 year imprisonment for financing terrorist activities. In March 2021, she was arrested for allegedly wiring thousands of dollars to a soldier with the intent of killing unnamed officials. The electoral commission had rejected her candidacy. HRWF stated that Ms Madougou was the leader and presidential candidate of the opposition party Les Democrates. HRWF also described Ms Madougou’s civil society campaign, “Don’t touch my constitution”, which was against leaders who sought to extend their rule in the name of constitutional reform. Her popularity grew as the movement spread throughout West Africa.

The UPR received a report from HRWF that included details on Joel Aivo’s December 2021 sentencing at the controversial Economic Crime and Terrorism Court, (CRIET), to 10 years imprisonment for plotting against the state and money laundering. HRWF stated in their submission that Mr Aivo was a law professor who challenged Talon during the April 2021 presidential elections. He was detained for eight months before his sentencing date and pleaded guilty to the charges. At the time of his sentencing, Mr Aivo said: “It’s not up to criminal justice to arbitrate over political differences. I’ve decided to surrender myself to this country. You are also my children. You can do whatever you like with me.” HRWF also mentioned media reports that Mr Aivo contracted COVID-19 in prison because he was confined with 38 other prisoners.

Willy Fautre is Director and Co-Founder at HRWF. He said: “Our organization has been monitoring the backsliding in Benin around human rights since 2016. We were particularly shocked to see Joel Aivo and Reckya Madougou not on the June 2022 detainee list. Ms Madougou, Mr Aivo must be released immediately. We are concerned about the well-being of these two politicians.

Rogatien Biaou ( pictured), Benin’s former foreign minister, was the president of the Alliance Patriotique Nouvel Espoir. This opposition party in Benin welcomed the UPR’s statement by HRWF. “The continued imprisonments of Joel Aivo and Reckya Madougou is completely inexcusable. This is a clear sign of President Patrice Talon’s determination to suppress democracy in Benin. Unfortunately, this detention takes place in the context of President Talon’s destruction of Benin’s other pillars. Benin is now a country in which state violence is used against protestors and the courts are used to support political ends. Free speech is threatened. Benin cannot be considered free if opposition figures are being persecuted.

HRWF provided additional background information in its report on what they consider to be further backsliding in Benin’s commitments to democracy and protecting rights. It explained that Patrice Talon’s government in 2018 introduced new rules for fielding candidates, and increased the cost of registration. All opposition parties were barred from the 2019 parliamentary elections by the electoral commission. It was populated with Mr Talon’s friends. The result was a parliament that was entirely composed of Mr Talon’s supporters.

HRWF also mentioned large protests, to which security forces responded by firing live ammunition. Four people were killed, and many others were injured. The Constitutional Court, which was headed by President Talon’s former personal lawyer and voted in favor of the results. Amnesty International stated that post-election repression had reached “disturbing levels” following the deaths of four demonstrators.

The NGO based in Brussels went on to explain how parliament changed election laws so that presidential candidates must have the approval at least 10% of Benin’s mayors and MPs. President Talon controls parliament and many mayors’ offices, so he can decide who can run for the presidency. These changes were condemned by international observers, and the United States government has partially stopped providing development assistance for the country.

In the report, it was also stated that President Talon had jailed many of his rivals and forced them to flee to safety abroad since he came to power. The Benin constitutional court is being run by his former lawyer. He also created CRIET (Economic Crime and Terrorism Court), a court that is used by the President to prosecute and neutralize his political enemies. CRIET judge, who fled Benin, said to RFI Radio France International (Radio France International), an French state broadcaster that the court receives “instructions from political leaders” in politically sensitive cases.

HRWF considers the persecution and intimidation of opposition figures to be part of an anti-democratic trend that includes the muzzling media. According to them, the country is now at the 121st position in the Global Press Freedom Index of Reporters sans Frontieres. Before President Talon assumed office in 2016, Benin was still at 78th position. Ten years earlier, it was even in the top 25 – one place behind Germany, and a few spots ahead of the United Kingdom.

With 86 percent of votes cast in the first round, Patrice Talon was declared the winner by Benin’s electoral committee.

The Economist described how Benin’s presidential election was widely condemned. It said that almost all of the opposition leaders were prevented from standing and some were exiled. A group of civil society groups that deployed over 1,400 observers to the election said in its preliminary statement that they observed attempts to harass, intimidate, threaten and corrupt voters across the country.

In January 2023, the UN will be discussing the findings of the UPR in Benin.