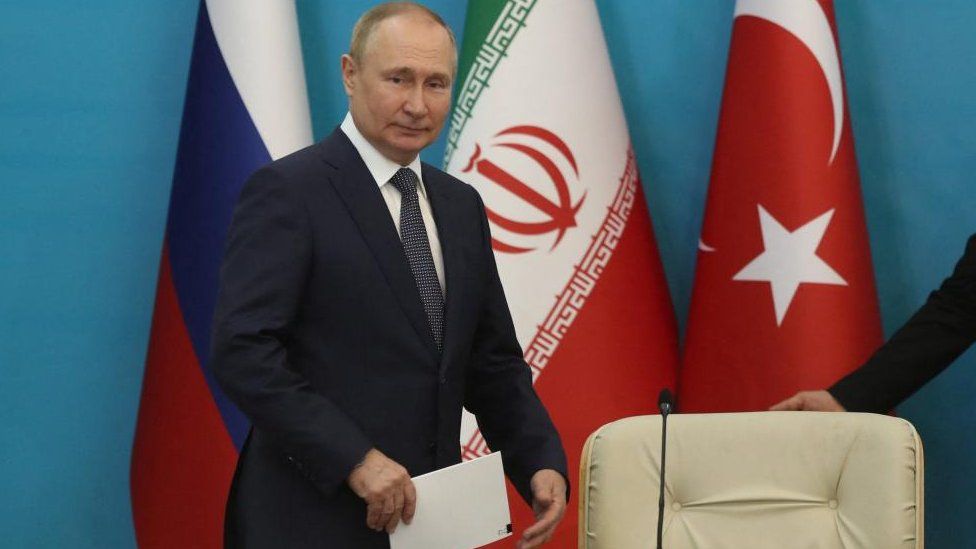 This was Vladimir Putin on Syria, after talks with the leaders of Turkey and Iran. Note his language in Tehran.

“The Syrian crisis can only be resolved by political and diplomatic means… by strictly adhering to the basic principles of the respect of sovereignty, independence, unity and territorial integrity.”

This is the same Vladimir Putin who, five months earlier, invaded Ukraine; no talk then of the need to respect a country’s sovereignty, independence, unity and territorial integrity.

The difference? Syria has a pro-Russia leader, President Bashar al-Assad, whom the Kremlin was determined to keep in power. Not so much through “political and diplomatic means”, but by sending in the Russian military to help him regain lost territory.

Ukraine, however, has a pro-Western leadership that seeks membership of the European Union and wants to ensure that Ukraine never returns to Russia’s orbit.

In went the Russian army, on the false pretext of fighting “Nazis”, countering Nato enlargement and “liberating” Russians and Russian-speakers in eastern Ukraine. Since the invasion, thousands of civilians have been killed in Ukraine.

The Russian invasion sparked international condemnation and a tsunami of sanctions against Moscow. In the West, Russia is rapidly approaching pariah status.

For the Kremlin, the Tehran summit was an opportunity to try to show that, despite attempts to isolate Russia, it retains powerful allies and geo-political influence. There aren’t many places in the world President Putin can go to get public statements of support for his “special military operation” in Ukraine. Tehran is one of them.

“In the case of Ukraine, had you not taken the initiative, the other side would have taken the initiative and caused the war,” Iran’s Supreme Leader Ali Khamenei reportedly told President Putin, adding: “Nato would know no bounds if the way was open to it. And if it was not stopped in Ukraine, it would start the same war some time later using Crimea as a pretext.”

So, in Tehran, did Russia prove its point, that it can get by with a little help from its (remaining) friends? Washington is unimpressed.

“[The trip] shows the degree to which Mr Putin and Russia are increasingly isolated. Now, they have to turn to Iran for help,” said John Kirby, the White House’s chief National Security Council spokesman.

Those 50 seconds that Erdogan made Putin wait, looking frazzled in-front of cameras say plenty of how much has changed after Ukraine: pic.twitter.com/giGirqaYYP

What’s more, on the summit side lines, Presidents Putin and Recep Tayyip Erdogan didn’t exactly come across as bosom buddies. The Kremlin leader was left standing awkwardly in front of the TV cameras while he waited for his Turkish counterpart to turn up.

But Moscow will continue to push its message:

Moscow’s “special operation” has not gone according to plan. But Vladimir Putin still seems confident that both in Ukraine – and in confrontation with the West – he will achieve some kind of victory.