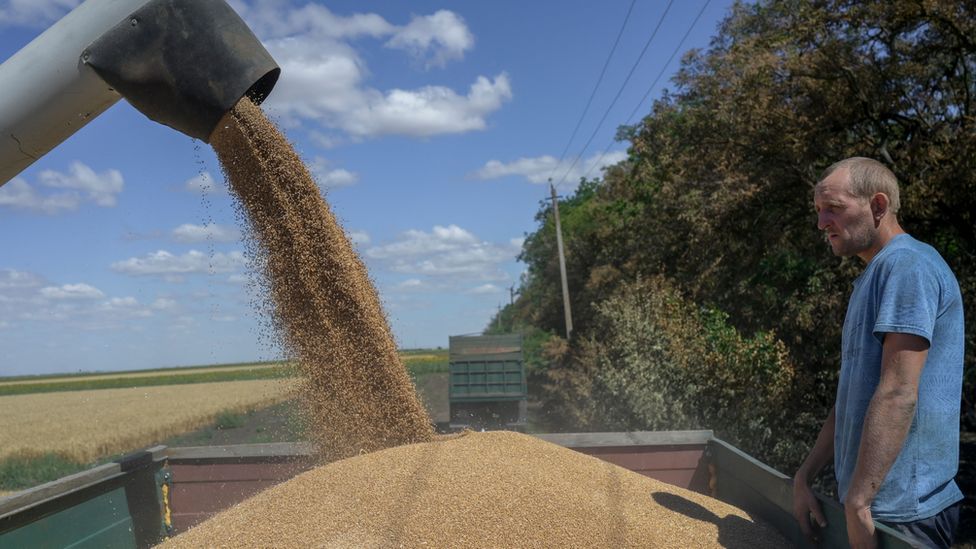 A deal has been reached to allow cargo ships to take grain from Ukrainian ports to the rest of the world.

A blockade imposed by Russia has caused soaring food prices and shortages in some of the world’s poorest countries.

How much grain is stuck in Ukraine?

About 20m tonnes of grain meant for export are trapped in the country.

Ukrainian president Volodymyr Zelensky has said this could rise to 75m tonnes after this year’s harvest.

The war also means that this year’s harvest will be smaller.

As much as 30% of the 86m tonnes of grain Ukraine normally produces will not be harvested, says Laura Wellesley, a food security specialist at think tank Chatham House.

How have grain shortages affected other countries?

Ukraine is usually the world’s fourth-largest grain exporter. It normally produces 42% of the world’s sunflower oil, 16% of its maize and 9% of its wheat.

In addition, wheat exports from Russia – the world’s largest exporter – are down.

Western sanctions do not target Russian agriculture, but the Kremlin argues they have hindered exports by hiking insurance rates and affecting payments. Russian ships carrying agricultural products are not barred from EU ports.

But the war has led to a shortage of 30 million tonnes of food in Africa, it says. This has contributed to a 40% rise in food prices across the continent.

In Nigeria, it has helped increase the price of staples such as pasta and bread by as much as 50%.

Similarly, Yemen normally imports more than a million tonnes of wheat a year from Ukraine.

The fall in supplies between January and May saw the price of flour rise by 42% and bread by 25% in Yemen, the UN says.

In Syria, another big importer of Ukrainian wheat, the price of bread has doubled.

International wheat prices have been falling on the news of the deal.

However, Laura Wellesley says that unless a lot of Ukraine’s grain is shipped, many countries in the Middle East and Africa will go short.

“This would push up the price of bread within those countries even further, which would cause a great deal of social unrest,” she says.

What’s the plan to lift the embargo?

Russia and Ukraine have signed “mirror deals” with the UN and Turkey to open up a “maritime corridor” in the Black Sea.

Who will insure cargo ships using the sea corridor?

Some insurers have charged 5% or 10% of the value of the ship for a single voyage.

However, the deal should mean lower costs, says Neil Roberts, of insurance industry body Lloyds Market Association.How much grain is stuck in Ukraine?

“It gives us hope that the grain can be retrieved from Ukrainian ports and the trade reactivated,” he says.

How has grain been exported without a safe sea corridor?

Before the war, Ukraine sent over 90% of its food exports by sea.

With its ports blockaded, it has been trying to export as much as it can by land, using trucks and trains.

The EU is trying to help – setting up “solidarity lanes”, so that Ukraine’s grain can be shipped from ports on the Baltic Sea, and also from the Romanian port of Constanta. For part of the journey to Constanta, the grain can be transported by barge along the Danube.

However, one major problem is that Ukraine’s train tracks are wider than those in the rest of Europe. That means grain be unloaded from one set of wagons at its border and reloaded onto others.

It has been taking as much as three weeks for grain to cross Europe and reach ports on the Baltic.

The Ukrainian Grain Association, a trade body, says only 1.5m tonnes of grain a month at most has been exported.

Before the war, Ukraine had been exporting as much as 7m tonnes of grain a month.