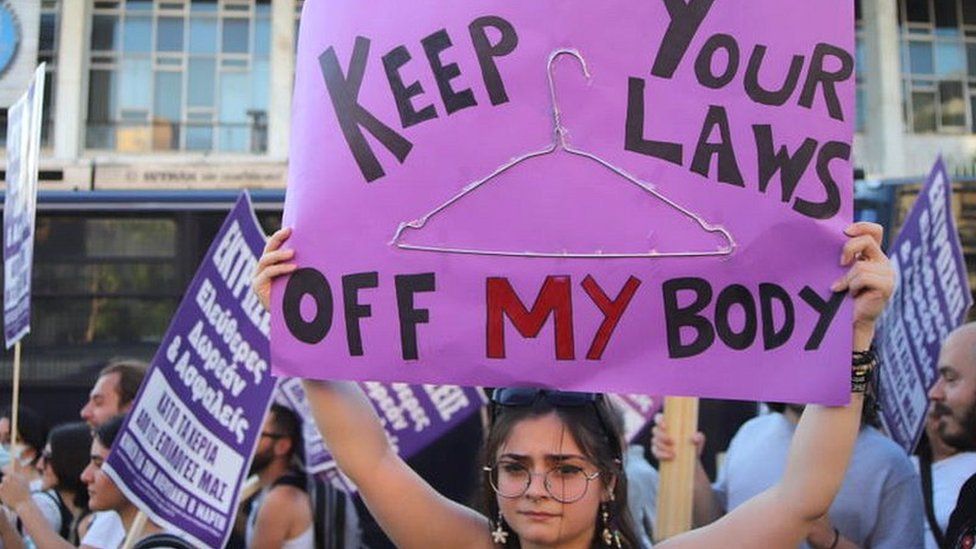 The debate over abortion rights in the United States has been accompanied by widespread misinformation about health concerns and legal rights.

We’ve looked at some of the most controversial issues and the facts behind them.

The American Center for Law and Justice, a Christian legal advice centre with 3.7 million Facebook followers, has written a widely-shared post claiming that “abortion is not safe” and calling on the US Supreme Court to reject arguments that it is.

This is a common claim but it’s not supported by evidence.

While all medical procedures carry some risk, the US-based Centers for Disease Control and Prevention (CDC) says that between 2013 and 2018 there were 0.4 deaths per 100,000 legal abortions in the US.

In a recent court case in Florida, obstetrician and anti-abortion campaigner Dr Ingrid Skop recommended setting the abortion limit at 15 weeks, saying the procedure became more “difficult and dangerous” after this point.

Complications do increase slightly with abortions carried out in later pregnancy, but a report by the National Academies of Science, Engineering and Medicine says serious complications remain very rare.

In the US, 98% of all abortions take place within the first 15 weeks.

During roughly the first 10-12 weeks of pregnancy, a non-surgical abortion can be carried out by taking two drugs – mifepristone and misoprostol.

This has become the most common abortion method in the US and is widely considered by expert bodies to be safe.

However, anti-abortion campaign group Students for Life of America, is one of several that claims the procedure is dangerous.

The group said in a post on Facebook: “If the abortion industry truly cared about women’s health they wouldn’t encourage women to put their health and lives at risk with dangerous chemical drugs.”

The Food and Drug Administration reports a rate of 0.35 deaths per 100,000 medication abortions – once again, a very low rate compared with the risks from live births.

As the use of abortion pills has grown, another trend has emerged – the promotion of “abortion-reversal pills”, advertised as a way to halt the procedure if a patient changes her mind after having taken the first of the two abortion pills.

The American College of Obstetricians and Gynecologists says there is no evidence that these “reversal” pills are effective.

And a trial of this method had to be halted before the results could be gathered, after three out of the 12 participants experienced dangerous levels of bleeding.

Despite this, promoters of abortion reversal point to research that they say shows the drugs do work, and to case studies as proof.

These studies have been criticised as poorly designed and ignore the fact that some pregnancies would continue anyway if only one of the two required abortion pills had been taken.

Nevertheless, at least eight US states have passed laws requiring doctors to inform people having medication abortions about these “reversal pills” as an available option.

Is miscarriage and ectopic pregnancy treatment under threat?

“The treatment for an ectopic pregnancy, a septic uterus, or a miscarriage that your body won’t release, is abortion. If you can’t get those abortions, you die,” reads one Twitter post.

There are hundreds of similar posts circulating online, suggesting these life-saving treatments will be prevented in states introducing strict abortion laws.

All US states that have or are preparing to introduce bans on abortion have exceptions in their proposed legislation to save the life of the woman.

In Arkansas, where abortion is banned except to save the woman’s life, legislation states that the removal of a potentially life-threatening ectopic pregnancy – where an egg is fertilised outside the womb – is “not an abortion”.

Nevertheless, concerns remain over the health consequences for women of stricter abortion laws.

Dr DeShawn Taylor, who runs a family-planning clinic, providing abortions in Arizona, has experienced this first-hand, having treated women with ectopic pregnancies who had been turned away from emergency departments.

She said: “The physician, who would be tasked with providing them the life-saving medication… won’t do it because of their beliefs.”

And, she adds, doctors may delay treatment, allowing patients’ condition to worsen, until it’s really clear it is life threatening.

Can a rapist serve less prison time than an abortion provider?

Posts shared hundreds of thousands of times have suggested a woman who has been raped could serve a longer sentence for having an abortion than her rapist would.

However, most states that have imposed abortion bans target punishments at the abortion provider rather than the person having the abortion.

Penalties already in place for abortion providers vary from one year in Ohio, for example, to life imprisonment in Texas and Alabama.

So, could the punishment for a rapist in Alabama be less than that for the doctor who provides the abortion, as this tweet claims?

In Alabama, the most serious category of rape – having sex with someone who is incapacitated and incapable of consent, or who is less than 12 years old and the offender is 16 or older – is a class-A felony, punishable by up to 99 years in prison.

The next-most serious category – which could include an adult having sex with a 12-year-old – carries a maximum sentence of 20 years.

So it’s possible that an abortion provider could face a more severe penalty than a rapist in Alabama.

However, much is still unknown about how the laws are going to be enforced.