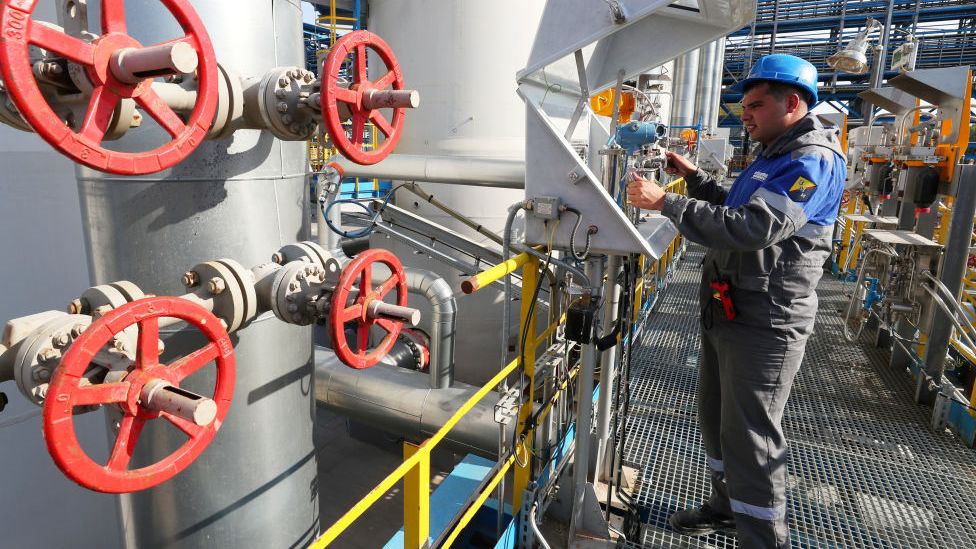 Russia has cut the amount of the natural gas it sends to Europe by closing down a turbine on the Nord Stream 1 pipeline.

Speculation that it would do so caused international gas prices to leap again amid renewed fears of shortages.

Critics accuse the Russian government of using gas as a political weapon.

What is Nord Stream 1 and how much gas does it supply?

The Nord Stream 1 pipeline stretches 1,200km (745 miles) under the Baltic Sea from the Russian coast near St Petersburg to north-eastern Germany.

It opened in 2011, and can send a maximum of 170m cubic metres of gas per day from Russia to Germany.

It is owned and operated by Nord Stream AG, whose majority shareholder is the Russian state-owned company Gazprom.

By the end of June, Germany was importing 26% of its gas from Russia. Most of it comes through Nord Stream 1 – with the rest coming from land-based pipelines.

Germany also agreed to the building of a parallel pipeline – Nord Stream 2 – but it never became operational due to the Russian invasion of Ukraine.

How has Russia cut supplies, and how is it hurting Europe?

In May, Gazprom closed the Yamal gas pipeline, which runs through Belarus and Poland and delivers gas to Germany and other European nations.

Then, in mid-June, Gazprom cut gas deliveries through Nord Stream 1 by 75% – from 170m cubic metres of gas a day to roughly 40m cubic metres.

In early July, it shut down Nord Stream 1 for 10 days, citing the need for maintenance work.

Now, shortly after reopening it, Gazprom has halved the amount supplied to 20m cubic metres.

When Russia announced its intention to restrict supply, within a day it had pushed up the wholesale price of gas in Europe by 10%.

Gas prices are now 450% higher than they were this time last year.

“The market is so tight at the moment that any disruption in supply causes more hikes in the price of gas,” says Carole Nakhle, CEO of analysts Crystol Energy.

“This could cause slowdowns in European economies and accelerate the route towards recession.”

How is Europe reacting to the supply cuts?

Gazprom says it is cutting supplies because it needs to close one of the turbines for maintenance, but few in Europe believe it.

The German government has said there are no technical reasons for Gazprom limiting supplies.

Ukraine’s President Volodymyr Zelensky called it “an overt gas war that Russia is waging against a united Europe”.

“It is trying to show that it is still an energy superpower, and can retaliate [against] the sanctions Europe has put on it.”

What can Europe do?

Ever since the outbreak of the war in Ukraine, Germany has been trying to get alternative supplies of gas from Norway and the Netherlands.

It is also buying five floating terminals to import liquefied natural gas from Qatar and the US, says Ms Dourian.

However, this will involve building new pipelines from the coast to the rest of Germany, which will take several months.

“You cannot build up a dependence on Russian gas as Germany has done, and change your sources of supply quickly,” says Ms Nakhle.

Italy and Spain are trying to import more gas from Algeria.

Germany is also increasing its use of coal and extending the life of power stations which it had been planning to shut down – despite the environmental impact of doing these things.

How is Europe reducing demand for gas?

The EU has worked out a deal in which member states cut usage by 15%.

Many European citizens are already taking steps themselves.

“In Germany,” says Ms Nakhle, “people are buying wood stoves and installing solar panels. Everyone is taking actions to reduce their use of gas.

“So we should not underestimate how seriously people are taking the prospect of gas shortages.”