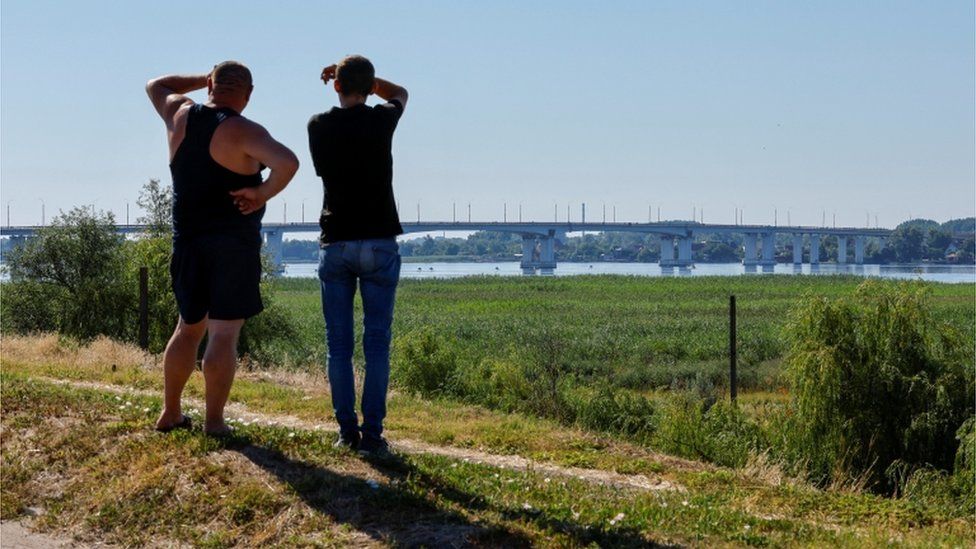 People in the Russian-occupied southern city of Kherson woke to news of a new Ukrainian rocket strike on a bridge connecting it to the east bank of the Dnipro river.

The Russian-backed authorities closed the Antonivskiy Bridge to civilian traffic after the overnight bombardment, the third in a week.

The attack using the high-precision Himars system further punctured the bridge with holes.

It is a crucial supply line for Russian forces as they prepare to defend the city from an expected Ukrainian counter-offensive, although Russian-appointed officials say it is used mainly by civilian traffic.

In his video address late on Wednesday, Ukrainian President Volodymyr Zelensky pledged to rebuild the Antonivskiy Bridge and other crossings after regaining control of the region.

“We are doing everything to ensure the occupiers have no logistical capabilities on our land,” he said.

Natural gas prices were up almost 2% on Wednesday, trading above an earlier all-time high.

They took off after Russia made good on a threat to further cut supplies to Germany and other central European countries.

Critics accuse the Russian government of using gas, one of its most important exports, as a political weapon.

Russia has been reducing flows through the Nord Stream 1 pipeline to Germany, which is now operating at less than a fifth of its normal capacity.

So what can Germany and other EU states do? Read our explainer.

Getting ready to ship grain

A spokesperson for the Odesa military administration said naval teams would build convoy routes out of the southern ports of Odesa, Chornomorsk and Pivdennyi.

Kyiv and Moscow struck a deal to allow the grain exports last week. Russia agreed not to target ports while grain was in transit, while Ukraine pledged to guide cargo ships through waters that had been mined.

There were fears at the weekend that the deal might collapse after Russia attacked a target in the Odesa port, and Russia has warned that obstacles to Russia’s own agricultural exports must be removed.

But in another sign that the deal is going ahead, the Joint Co-ordination Centre (JCC) meant to oversee the process was formally launched in Istanbul, Turkey.

Ukrainian President Volodymyr Zelensky has said the outgoing British prime minister is a “big friend” of his country and should not “disappear” after he stands down.

Speaking to TalkTV, he said he would like Mr Johnson to remain “somewhere in politics in a position to be someone”.

The prime minister is due to leave office on 6 September.

The UK is one of the leading donors of military and humanitarian aid to Ukraine, and has imposed sanctions on Russia.

Mr Johnson has visited Ukraine twice since the invasion.

A Ukrainian refugee who worked on the country’s MasterChef TV show has found a job on the British version.

Alina Nesterova landed the job after fleeing her home in Kyiv when Russia invaded. She found a place to stay in the English town of Basingstoke with a Homes for Ukraine host family.

But her happiness was clouded after her phone was stolen from her in the street as she texted her parents who remain in Ukraine.

The phone contained all her Ukrainian information and photos – “all my memories – my last photo from the bunker, my last photo with my friends”.