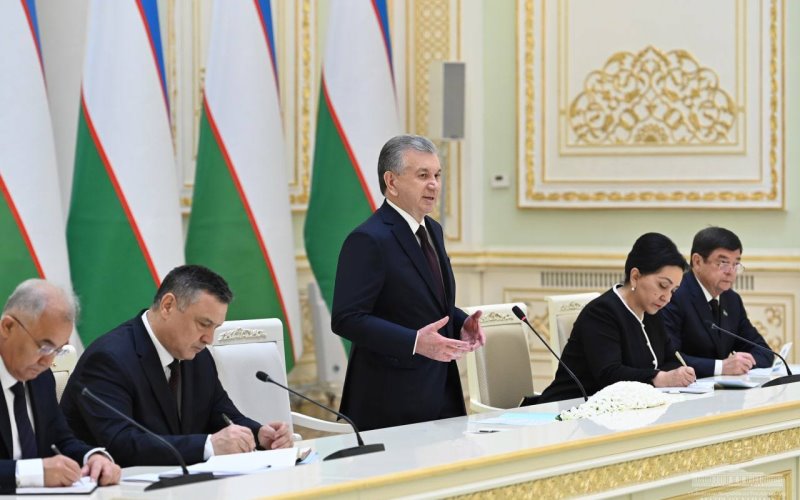 This year’s most significant event in Uzbekistani politics is the Reform of the Constitution. It was announced by President Shavkat Mirziyoyev during his inaugural speech. As Uzbekistan marks its 30th anniversary of independence, it is symbolic to adopt a revised Constitution. Alberto Turkstra writes.

One of the amendments being discussed is the extension of President Mirziyoyev’s term from five years to seven. This would allow for his consolidation of power. But, President Mirziyoyev has been widely regarded as the right person for the reforms he initiated. Sodiq Safoyev, Deputy Speaker, stated that “I believe that the person who initiated these reforms should be given the chance to close them.” In a similar vein, Uzbekistan’s Ambassador to America, JavlonVakhabov, stated that “b being completely honest with ourselves; currently there are no alternative political figures in Uzbekistan; with the same level and trust; and the ability for us to achieve our aspirations”.

The mahalla system is a hybrid system of community-based organizations which have become an institutionalized part of Uzbekistan’s public administration. They work partly for the state (as a part of the local government), and partly as parts of an informal, community-driven welfare and service provision system. The proposed amendments will allow mahallas to be restored to their natural roles, which is to say that they are not bound by the state structure.

Many of the proposed changes to the constitution in the social realm are a reflection of the Development Strategy of New Uzbekistan (for the period 2022-2026), a document that contains many references to the empowerment of civil society institutions and the improvement of activities of non-governmental organisations, etc. It’s not secret that the empowerment of civil society institutions can be a powerful tool for democratic change. This will help to support Uzbekistan’s ambitious reform programme, raise accountability and oversight of public officials, and increase the voice of marginalized and vulnerable populations in order to achieve more inclusive reform outcomes.

These reforms are evident in a country where self initiated, bottom-up non-governmental organizations (GONGOs) have long been outnumbered by Government-Organised NGO Organisations (GONGOs). These GONGOs, which were established by decrees of the government and directly funded by state budgets, have a large network of regional branches. In practice, the constitutional consolidation of the status and role of civil society institutions must be realized by removing the bureaucratic, legal and regulatory obstacles that have in the past limited the formation of civil societies and prevented independent NGOs from operating in Uzbekistan.

President Mirziyoyev also discussed the need to transfer some power to the Oliy Majlis, Uzbekistan’s bicameral parliament. While Uzbekistan will likely retain a strong presidential system, some powers and functions will be transferred to the Upper House of the Parliament (the Senate) such as increased oversight of the creation and execution of the state budget and approval for the appointment of the head of the Anti-Corruption Agency. It would be a great help if this delegation of power also extended to the Lower House (the Legislative Chamber), which is elected directly.

A greater participation by the Uzbek parliament in the implementation and identification of most pressing socio-economic and political problems is important because the place and function of the legislative power within the structure of social institutions of society and its ability to have an actual impact on daily political decision-making – are good indicators of a country’s progress along the path towards political modernization.

The President is not the only one who has proposed Constitutional reforms. The process is ongoing and every citizen can have their say over a prolonged period of public consultation. It started with ten days, but has been extended to one month (until August). The Constitutional Commission was established on May 24, and is composed of senators, lawmakers, representatives from all regions of Uzbekistan and representatives of civil society institutions, lawyers and other experts. It is charged with collecting amendments to the Constitution. Citizens can submit their ideas through a website, Telegram channel, and a call center. The number of submitted proposals has reached tens of thousands.

Odiljon Tojiev (Deputy Speaker of Uzbekistan’s parliament) says that while not all the proposals received are “phrased or belong in a Constitution”, he does give some clues as to the main suggestions received from citizens. These include the calls for direct elections of regional governors, mayors (all of whom are currently appointed by President); harsher penalties for corruption; increased transparency at all levels and a reduction in government ministries.

Important to remember that constitutional reforms are not necessary because the Constitution is not up-to-date. It is certain that it does. This can make it difficult to justify changing it. Akmal Saidov, the chair of the constitutional commission said that the constitution was not a “dogma” but a program for action. It is not something that has been frozen. It is necessary to establish new rules to support the development of Uzbekistan.

The proposed revisions of Article 27 provide a good example of how the Constitution will be a “living document”. They promise to end the unauthorised seizing of land and housing and give the Uzbek people the right to inviolability of their home constitutional rights. This is especially relevant considering the high number of forced evictions and house demolitions that Uzbekistan has seen in recent years.

Last, but not least, President Mirziyoyev didn’t necessarily need to call for a referendum to pass constitutional reforms. Article 127 of Uzbek Constitution states that the Constitution of Republic of Uzbekistan may be amended by law passed by a majority of the Legislative Chamber members and senators of Oliy Majlis of Uzbekistan or by referendum.

The Uzbek Parliament is authorized to approve and propose constitutional amendments. President Mirziyoyev, however, decided to make them available for public vote. This effectively makes the new Constitution one of the people and for people. This will make the Basic Law more credible and allow the individual to exercise their rights.

The new political, legal, and socio-economic realities of Uzbekistan require a comprehensive revision of the Constitution. These proposed constitutional reforms will be subject to a national referendum. They are the result of a reform process initiated by President Shavkat Miziyoyev in 2016, when he assumed power. Uzbekistan’s citizens will have the chance to have an active role in shaping the future.

Alberto Turkstra is the author and Project Manager at Diplomatic World.