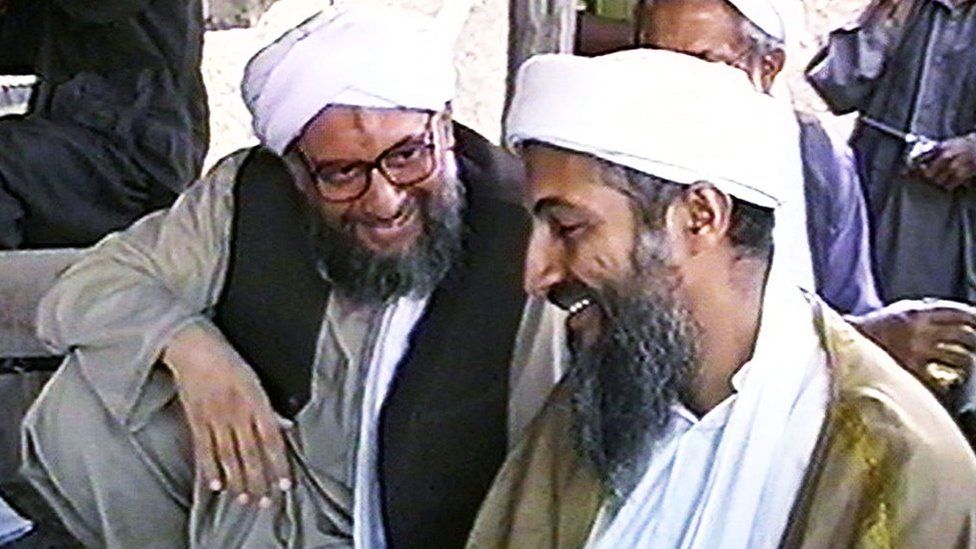 The sudden, violent, but not entirely unexpected demise of the al-Qaeda leader last weekend poses the inevitable question: what becomes of the organisation he has left behind? In fact, what is al-Qaeda and is it even relevant any more in 2022?

Al-Qaeda in Arabic means “the base”. It is a proscribed terrorist organisation dedicated to attacking Western interests around the world and to bringing down governments across Asia and Africa, which it considers too close to the West and insufficiently Islamic.

It was formed in the late 1980s in the Afghan-Pakistani borderlands out of the remnants of the Arab volunteer army, who went to fight the Soviets who had invaded and occupied Afghanistan.

Only a generation ago al-Qaeda was pretty much a household name all across the world and it was seen as the number one security threat in the West.

Why? Because at the time it had succeeded in pulling off a series of ever bolder, ever more complex and successful attacks, which in turn inspired more violent followers to join its ranks.

In 1998 it carried out simultaneous bombings on America’s embassies in Kenya and Tanzania, killing mostly African civilians.

In 2000 it rammed a tiny speedboat packed with high explosives into the side of the USS Cole in Aden harbour, killing 17 sailors and crippling this billion-dollar warship. Then, on a cloudless blue New York morning on 11 September 2001, “the world changed forever”.

After months of secret planning, al-Qaeda operatives hijacked four US airliners in mid-flight and steered two of them into New York’s iconic World Trade Centre, bringing down these two giant skyscrapers in a fireball of flames and dust.

They crashed another plane into the Pentagon, home of the US Department of Defense, while in a fourth plane the passengers overpowered the hijackers and it crashed in a field, killing all onboard.

Nearly 3,000 people died that day. It became known as “9/11” because in the US calendar system it took place on the 11th day of the ninth month.

It was quite simply the worst terrorist attack ever on mainland America and it set in train two decades of the controversial US-led “war on terror”.

9/11 was plotted and planned from al-Qaeda’s bases in the mountains of Afghanistan, where they were given shelter by the Taliban. So the US and Britain then invaded that country, deposed the Taliban and drove out al-Qaeda. It took America another 10 years before it tracked down and killed al-Qaeda’s elusive leader, Osama Bin Laden, in May 2011.

So what’s happened since then and what state is al-Qaeda in now?

Change at the top and a new rival

Osama Bin Laden was swiftly replaced at the top of al-Qaeda by his old mentor, the bookish and bespectacled Dr. Ayman al-Zawahiri, the man who was killed in a CIA drone strike at the weekend.

During his 11 years as leader, this former Egyptian eye surgeon never got anywhere near matching the charismatic appeal enjoyed by his predecessor amongst young, violent-minded jihadists.

His recorded video messages, always calling for attacks on the West and its allies, tended to be long-winded and boring. He had no mass appeal.

Before long, al-Qaeda was facing desertions to a new, ultra-violent splinter group calling itself Islamic State, or “ISIS”, short for Islamic State in Iraq and Sham (greater Syria). Young jihadists, impatient for new attacks, mocked al-Qaeda’s leadership, saying while it was doing a lot of talking, ISIS was doing the action.

The 9/11 attacks were a monumental failure of US intelligence.

Despite the clues missed by Washington, the attacks succeeded partly because the CIA was not sharing its secrets with the FBI and vice versa. That has changed. US and Western intelligence agencies are now far better informed, they collaborate more and their recruitment of informants from inside al-Qaeda and ISIS have meant fewer successful terror attacks.

But there’s no getting away from the fact that last year’s chaotic Western withdrawal from Afghanistan has opened up dangerous new opportunities for al-Qaeda.

The very fact that al-Zawahiri was found living comfortably in a Kabul “safe house”, close to the Taliban leadership, shows that hardcore jihadist elements within the Taliban have no intention of breaking off ties with al-Qaeda.

Afghanistan has special significance for al-Qaeda.

It was here that the young, wealthy and idealistic Osama Bin Laden brought his family’s engineering skills to build cave complexes in the 1980s to fight the invading Soviets.

It was here that he lived for five years under the Taliban’s protection from 1996-2001. And it is here that al-Qaeda is keen to re-establish its presence now that its friends in the Taliban are back in power.

Where once al-Qaeda was a geographically small, centralised, tight-knit organisation, today it has become a global franchise with pockets of followers dotted around the world, mostly in ungoverned or poorly governed spaces.

In Somalia, for example, the al-Qaeda affiliate “al-Shabab” remains the foremost jihadist group.

Africa has emerged as the new battleground for jihadist groups like al-Qaeda and ISIS, notably in the area around the Sahel in northwest Africa.

They are not just fighting to bring down what they see as “apostate” governments, they are fighting each other, leaving civilians caught in the crossfire.

Al-Qaeda remains at heart a Middle Eastern terror group. Bin Laden was a Saudi, al-Zawahiri was Egyptian, the senior leadership – such as it remains – is nearly all Arab. It retains a significant presence in northwest Syria, where US drone strikes and special forces raids periodically hit its suspected hideouts.

With the death of al-Zawahiri, al-Qaeda may now decide to revive its flagging fortunes with a new leader and a new strategy.

It would be a foolish intelligence agency that concludes that the threat from this group has died with its leader.

Salman Rushdie off ventilator and able to talk