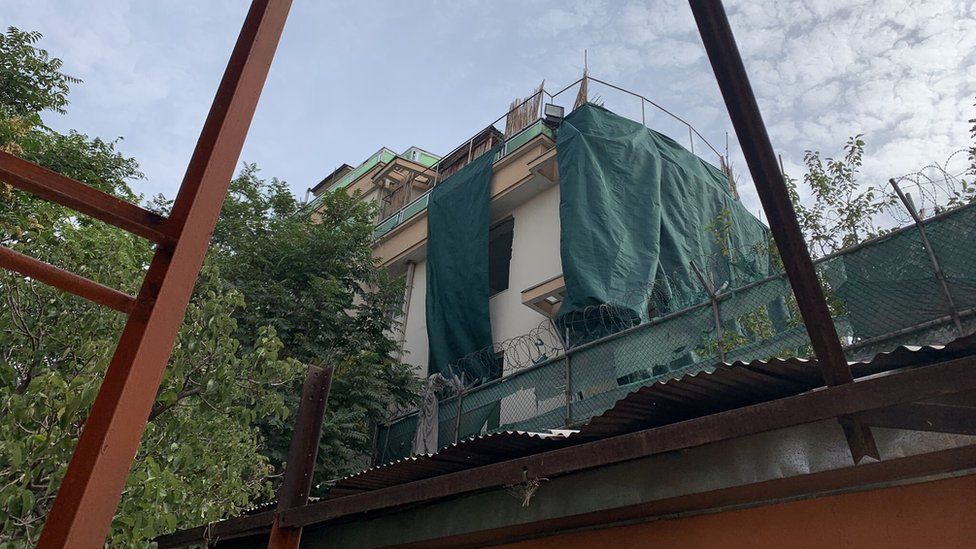 Just over an hour after sunrise on 31 July, long-time al-Qaeda boss Ayman al-Zawahiri walked out onto the balcony of a downtown Kabul compound – reportedly a favourite post-prayer activity of the veteran Egyptian jihadist.

It would be the last thing he would do.

At 06:18 local time (01:38 GMT), two missiles slammed into the balcony, killing the 71-year-old but leaving his wife and daughter unscathed inside. All the damage from the strike appears to be centred on the balcony.

How was it possible to strike so precisely? In the past the US has faced criticism for strikes and targeting errors that have killed civilians.

But in this case, here’s how the type of missile, and a close study of Zawahiri’s habits, made it happen – and why more strikes could follow.

The type of missile used was key – and these were said by US officials to be drone-fired Hellfires – a type of air-to-surface missile that has become a fixture of US counter-terrorism operations overseas in the decades since the 11 September 2001 attacks.

The missile can be fired from a variety of platforms, including helicopters, ground vehicles, ships and fixed wing aircraft – or, in Zawahiri’s case, from an unmanned drone.

The US is believed to have used Hellfires to kill Iranian general Qassem Soleimani in Baghdad in early 2020, and the British-born Islamic State jihadist known as “Jihadi John” in Syria in 2015.

Among the main reasons for the Hellfire’s repeated use is its precision.

When a missile is launched from a drone, a weapons operator – sometimes sitting in an air-conditioned control room as far away as the continental US – sees a live video stream of the target, which the drone’s camera sensors feed back via satellite.

Using a set of “targeting brackets” on the screen, the camera operator is then able to “lock up” the target and point a laser at it. Once the missile is fired, it follows the path of that laser until striking the target.

There are clear, sequential procedures the crew operating the drone must follow before taking action, to minimise the risk of civilian casualties. In past US military or CIA strikes, this has included calling on military lawyers for consultations before the order to fire is given.

Professor William Banks, an expert on targeted killings and the founder of the Syracuse University Institute for Security Policy and Law, said that officials would have had to balance the risk of civilian deaths with the value of the target.

The Zawahiri strike, he added, “sounds like a model application” of the process.

“It sounds like they were very careful and deliberate in this instance to find him in a location and at a time when they could hit just him and not harm any other person,” Prof Banks said.

In the case of the Zawahiri strike, it has been suggested, but not confirmed, that the US also used a relatively unknown version of the Hellfire – the R9X – which deploys six blades to slice through targets using its kinetic energy.

In 2017, another al-Qaeda leader and one of Zawahiri’s deputies, Abu Khayr al-Masri, was reportedly killed with an R9X Hellfire in Syria. Photos of his vehicle taken after the strike showed that the missile had cut a hole in the roof and shredded its occupants, but without signs of an explosion or any further destruction to the vehicle.

Details are still emerging about what intelligence the US gathered before launching the Kabul strike.

In the aftermath of the attack, however, US officials said they had enough information to understand Zawahiri’s “pattern of life” at the house – such as his balcony habit.

This suggests US spies had been watching the house for weeks, if not months.

Marc Polymeropoulos, a former senior official at the CIA, told the BBC that it is likely that a variety of intelligence methods were used before the strike, including spies on the ground and signals intelligence.

Some have also speculated that US drones or aircraft took turns monitoring the location for weeks or months, unheard and unseen from the ground below.

“You need something that’s near certainty that it is the individual, and it also has to be done in a collateral free environment, meaning no civilian casualties,” he said. “It takes a lot of patience.”

The Zawahiri strike, Mr Polymeropoulos added, benefited from the US intelligence community’s decades of experience tracking down individual al-Qaeda figures and other terrorist targets.

“We are outstanding at this. It’s something that the US government has gotten very good at over 20 years,” he said. “And Americans are far safer for it.”

However, US operations of this kind do not always go according to plan. On 29 August 2021, a drone strike on a car just north of Kabul airport, intended to target a local branch of the Islamic State group, killed 10 innocent people instead. The Pentagon acknowledged that a “tragic mistake” had been made.

Bill Roggio, a senior fellow at the Foundation for Defence of Democracies who has been tracking US drone strikes for many years, said that the Zawahiri strike was likely “much more difficult” than previous killings to execute, given the absence of any US government presence or assets nearby.

“[In those places] it was far easier for the US to reach those areas. It had assets on the ground. This was far more complicated,” he said. “This is the first strike against al-Qaeda or the Islamic State in Afghanistan since the US left. This isn’t a common occurrence.”

Could this happen again?

“There is no dearth of targets,” he said. “The potential next leaders [of al-Qaeda] will very likely be moving to Afghanistan, if they’re not there already.”

“The question is if the US still has the ability to do this with ease, or is it going to be a difficult process?” he added.