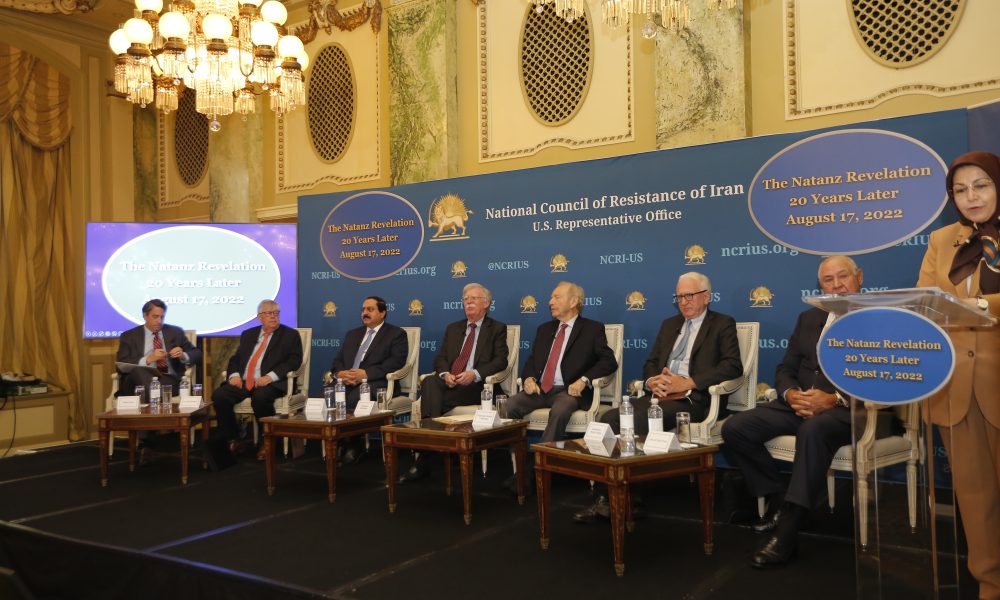 On Wednesday, 17 August, a panel discussion, entitled, “NCRI-US Conference to Examine Tehran’s Nuclear Agenda on the 20th Anniversary of Natanz Revelation” was held by the Washington office of the National Council of Resistance of Iran (NCRI), writes Shahin Gobadi.

A distinguished array of national security and non-proliferation experts addressed the current state of the Iranian regime’s nuclear weapons program, Ebrahim Raisi’s agenda, and his record after one year in office. The conference called for a firm policy in recognition of the Iranian regime’s intransigence and dangerous escalations of its nuclear and terrorist activities, and the Iranian people’s continued uprising to bring fundamental change in their country.

In her opening remarks, Ms. Samsami said, “The revelations about the Natanz uranium enrichment site and Arak heavy water facility were not the only NCRI revelations. It has made more than 100 revelations about different aspects of the Iranian regime’s nuclear weapons program, most of which have appeared in successive IAEA reports.” “Indeed, were it not for those revelations, the most active state sponsor of terror would have had the most dangerous weapon by now,” she added. “Despite laying bare some two decades of denial, deception, and duplicity on the part of the ruling theocracy about its nuclear weapons program, Western powers have chosen appeasement instead of firmness, offering concession after concession to the mullahs in the futile hope of convincing them to come clean. Had a decisive policy been adopted by the West in 2002 after the NCRI revelations, today, the regime would not have made such advances in its nuclear weapons program.”

Samsami, concluded, “The West must take a firm position, the least of which is to activate the six Security Council resolutions. The ultimate solution to the nuclear crisis and the clerical regime’s malign behavior is regime change by the Iranian people and the organized Resistance, and the establishment of a democratically elected republic, a task the NCRI and the People’s Mojahedin Organization of Iran (PMOI/ MEK) are working towards 24/7.”

In his remarks, Ambassador John Bolton criticized the continued policy of dialogue with the regime and said, “For 20-plus years, this regime has lied about its nuclear program. Therefore, in case of any deal made, the reality is that the regime will not comply with it.” He concluded that there are “many reasons why we shouldn’t go for the 2015 agreement.”

Senator Joe Lieberman stated that the NCRI’s revelation in 2002 set the context for a bipartisan way to respond to the regime’s nuclear program. Referring to the abhorrent situation of human rights and the surge in executions in Iran, as well as the increase in terrorist activities abroad under the administration of President Ebrahim Raisi, he concluded, “The Supreme Leader chose a murderer who has killed more than 529 men, 21 women, and several children in just a year. We must walk away from the discussions with this regime in Vienna. How can we trust a government that tries to assassinate our National Security Advisor? This regime will never change its behavior. So, our policy should be to support regime change. We have to stand with the people of Iran, including the NCRI.”

Ambassador Bob Joseph emphasized the necessity of a firm policy on Iran. He said, “If there will be an agreement, and if we lift sanctions, the result will be that the [Iranian regime] will support terrorism, make more missiles, will support regimes like Syria and suppress the Iranian people.” He added, “We should not stand in the way of the Iranians who seek democracy and freedom.”

Olli Heinonen acknowledged the importance of the NCRI’s revelation in 2002 and the impact of the ensuing IAEA investigation on his own life. He also confirmed that cooperation between North Korea and the Iranian regime on the nuclear program continues to date.

General Chuck Wald agreed with other panelists on the need for a firm policy on Iran and said, “The IRGC needs to stay on the Foreign Terrorist Organization’s list. That’s what they are.” He also insisted that the West needs to take action against the Iranian regime’s ballistic missiles program.

Alireza Jafarzadeh gave details of the NCRI’s revelations from the past few decades, emphasizing that nine months after Natanz, the NCRI also provided revelations about centrifuge testing facilities at Kala Electric in East Tehran, a laser enrichment facility in Lashkar Abad, and the Lavizan-Shian site in Tehran. He explained:

Jafarzadeh went on to give an account of the Iranian Resistance movement’s growth, the public’s commitment to regime change, and the proliferation of the Resistance Units through eight rounds of major protests since 2018, some engulfing over 200 cities, despite mass arrests.

“Under Raisi’s watch over the past year, the executions have more than doubled, including the resumption of public hangings,” Jafarzadeh said. “Terror plots abroad have increased including on U.S. soil, and the nuclear defiance has continued. And all of this has happened while the West was constantly offering the regime concessions and avoiding accountability. So, with this regime, any concession will make them more aggressive, leniency on terrorism will beget more terrorism, and backing down on the nuclear issue will only speed up their dash toward the bomb.”

On August 14, 2002, the main Iranian opposition movement, the National Council of Resistance of Iran (NCRI) – relying on detailed information obtained by the domestic network of its principal member organization, the MEK – revealed the existence of a secret nuclear site in Natanz, central Iran.

That revelation was followed by several other revelations to provide a comprehensive picture of Tehran’s nuclear weapons program.