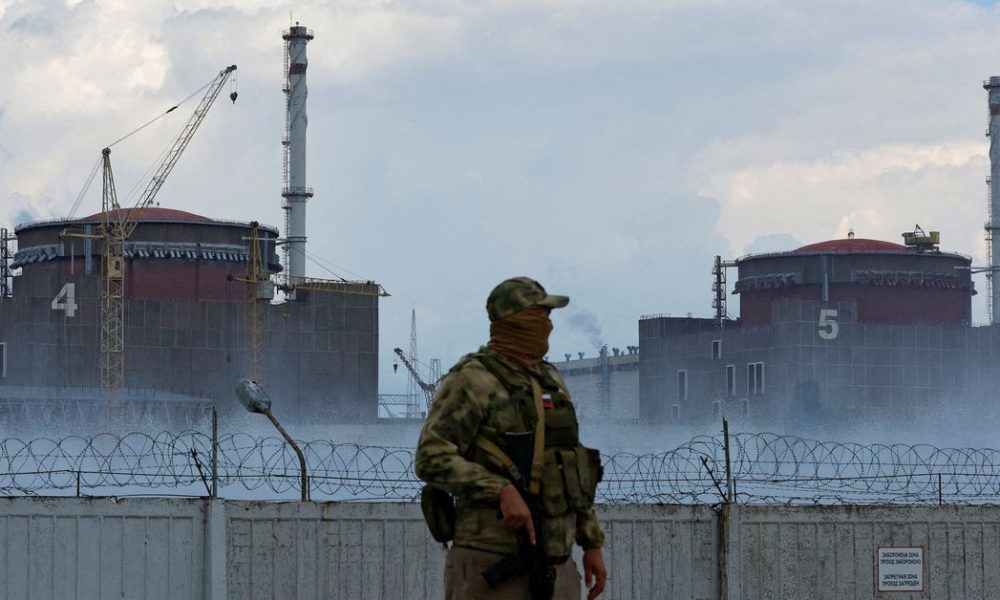 Ukrainian technicians at the Russian-held nuclear power plant hit by shelling work under the barrels of Russian guns and face huge pressure, but they are staying on to make sure there is no Chornobyl-style disaster, one of them said.

The technician, who asked that his identity not be disclosed for fear of Russian reprisals, offered a rare glimpse into the fraught working conditions at the Zaporizhzhia plant, which Moscow and Kyiv accuse each other of shelling.

Europe’s biggest nuclear plant was captured by Russia in March and the bouts of shelling have been widely condemned, prompting calls for an urgent mission of the International Atomic Energy Agency to the facility in southern Ukraine.

The technician said that many workers had sent their families away from the town of Enerhodar where the plant is located, but had stayed on themselves to ensure the station’s safe operation.

“The employees understand they need to get their families out, but they themselves come back. They have to work because of the possibility of a major catastrophe like Chornobyl in 1986 and that would be much worse,” the technician said.

Heavily-armed Russian troops are everywhere at the site, which is in itself highly unnerving, and armoured personnel carriers have their barrels pointed at the entrance as workers enter, he added.

“They find a reason not to let (employees) out – shelling, or they come up with something else,” he said.

“They’re constantly walking around the premises with guns. It’s very hard when you go into the plant and see these people and have to be there. It’s very mentally and psychologically taxing.”

The Russian Defence Ministry did not immediately reply to a request for a comment.

Energoatom, the top Ukrainian state body that normally oversees the plant, said it believed the facility’s workers were being pressured and were also in danger.

It referred to comments made by its chief Petro Kotin on Aug. 2 in which he said the staff were working under “intense psychological and physical pressure”, and complained about the Russian military presence at the site.

The nuclear power plant had 11,000 personnel before Russia invaded on 24 February. Ukrainian authorities are not disclosing the current number of workers, citing security reasons.

One of the constant fears is the electricity lines to the plant could be severed because the pumps that cool the reactor core and spent fuel pools need electricity to function, the technician said.

There is a backup electricity station that runs on diesel, but the technician said he did not know how much diesel fuel was left at the site.

The town of Enerhodar had a pre-war population of more than 50,000. The town’s mayor, Dmytro Orlov, said that around 25,000 people remain.

Around 1,000 of the plant’s employees had left the town by July, Energoatom’s spokesperson Leonid Oliynyk told Reuters, adding that he had no data for their family members.

Even though only two of the six reactors are functioning currently, there is still a huge amount of important safety work for staff to do, the technician said. Four of the plant’s six reactors are not working at normal capacity currently, but they still require proper maintenance, he said.

“The staff came back to maintain control because the security of Ukraine is at stake and that of the whole European continent and the world,” the technician said.

As several bouts of shelling have hit the complex of the nuclear power plant, Ukraine and Russia have said they want IAEA inspectors to visit the facility and the agency’s chief Rafael Grossi has said he is ready to lead a mission.

The United Nations has said it can facilitate such a trip, but that Ukraine and Russia have to agree on it.

The technician voiced scepticism that a trip to the facility by an IAEA mission would help much.

“Only the full de-occupation of the town, the nuclear station, the thermal power plant, Zaporizhzhia and Kherson regions and others, only then will people actually be safe,” he said.