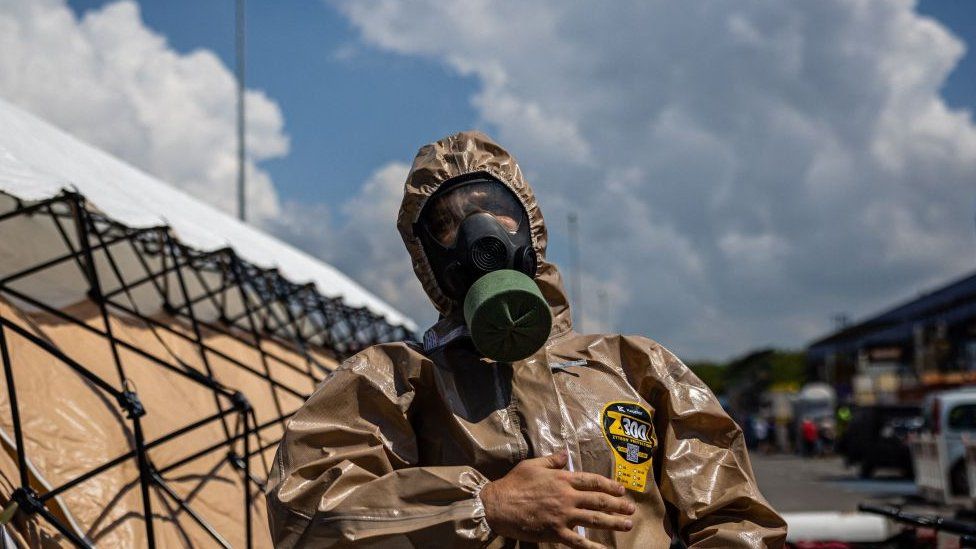 The rhetoric surrounding Europe’s biggest nuclear power plant – close to the front line in Ukraine – is becoming increasingly alarming, with international figures warning of the risk of a major accident.

UN Secretary General António Guterres believes potential damage to the Zaporizhzhia plant could be “suicide” and Turkey’s president has said no-one wants another Chernobyl – the world’s worst nuclear accident, when Ukraine was under Soviet rule.

Russia seized the site on the left bank of the River Dnieper at the start of its war but this month the two sides have accused each other of repeatedly shelling it.

Each claims the other is planning a provocation. Ukraine says a Russian film crew has already staged an attack to blame on Kyiv.

Russian defence officials have produced a map showing how a radioactive cloud might spread from the plant from Ukraine to neighbouring countries, including Hungary, Poland and Slovakia.

What, then, is the risk to this nuclear plant which houses six reactors – and is Europe facing a Fukushima-type meltdown?

“I wouldn’t be too worried,” says Mark Wenman, head of the Centre for Doctoral Training in Nuclear Energy Futures.

“Zaporizhzhia was built in the 1980s, which is relatively modern. It has a solid containment building. It’s 1.75m [5.75ft] thick, of heavily reinforced concrete on a seismic bed [to withstand earthquakes]… and it takes a hell of a lot to breach that.”

He rejects comparisons with either Chernobyl in 1986 or Fukushima in 2011. Chernobyl had serious design flaws, he explains, while at Fukushima the diesel generators were flooded, which he believes would not happen in Ukraine as the generators are inside the containment building.

Much of the anxiety has been about the plant coming under fire from artillery shells or rockets. Ukraine has accused Russian forces of using it as a shield from which to fire on nearby cities. Russia denies that is the case.

That may not be the biggest risk. After 9/11, nuclear plants were tested for potential attacks involving large airliners and found to be largely safe.

A potentially more serious hazard could come if the power supply to the nuclear reactors and back-up generators was lost and led to a loss of coolant. With no electricity to power the pumps around the hot reactor core, the fuel would start to melt.

Lt Gen Igor Kirillov, who heads Russia’s nuclear protection corps, said the plant’s support systems had already been damaged by shelling, and that kind of pump and generator failure could lead to the reactor core overheating and the plant’s facilities being destroyed.

“That wouldn’t be as serious as Chernobyl, but it could still lead to a release of radioactivity and that depends which way the wind’s blowing,” says Claire Corkhill, professor of nuclear material degradation at the University of Sheffield.

For her, the risk of something going wrong is genuine – and Russia would be just as much at risk as Central Europe.

The UN’s atomic energy authority, the IAEA, warns of a “very real risk of nuclear disaster” and has asked to be allowed access to the site as soon as possible. The UN secretary general has called on Russia to pull its troops out and demilitarise the area with a “safe perimeter”. Russia has refused, arguing that would make the plant more vulnerable.

Ukraine’s nuclear agency says three of the four power transmission lines linking the plant to Ukraine have already been damaged by rocket fire. If the last source of power is also broken, the agency believes nuclear fuel will begin melting “resulting in a release of radioactive substances to the environment”, and diesel generators will not provide a long-term solution.

But Prof Iztok Tiselj, chair of nuclear engineering at the University of Ljubljana in Slovenia, believes the risk of a major radioactive incident is minimal as only two of the six reactors are now operating.

“From the standpoint of European citizens there’s no reason to worry,” he says. The other four are in a state of cold shutdown, so the amount of power needed to cool the reactors is smaller.

Mark Wenman is full of praise for the Ukrainian staff at the plant who reduced the number of reactors in operation.

That means that even though the radioactive products continue to be radioactive, the so-called “decay heat” after a shutdown decays exponentially with time. “Provided the diesel generators are in good shape, even if they lost electricity from the grid they should be able to cool the reactor,” he says.

Another major safety fear could come from the spent fuel at Zaporizhzhia. Once the fuel is finished the waste is cooled in spent fuel pools and then moved to dry cask storage.

“If these were to be damaged there would be a release of radioactivity but it wouldn’t be anywhere near as serious as the loss of coolant,” says Prof Corkhill. And Iztok Tiselj believes any release of would be so small as to be negligible.

At the heart of this crisis are the plant’s original staff, working under Russian occupation and quite probably under a great deal of stress. They have complained of the plant coming under continuous attack but warn the real threat of disaster would emerge if Russia shut the whole plant down, so it could disconnect the supply from Ukraine and reconnect it instead to Russian-occupied Crimea.

Dr Wenman believes it is the human factor that represents the biggest risk of a nuclear accident, whether because of chronic fatigue or stress: “And that violates all the safety principles.”

If something were to go wrong, they would need to be on top form, and one can imagine they are not, says Claire Corkhill.

The head of the IAEA, Rafael Grossi, appealed for the staff to be left to carry out their duties “without threats or pressure”.

A letter signed by dozens of employees at the plant on Thursday called on the international community to stop and think: “We can professionally control nuclear fission,” it said, “but we are helpless in the face of people’s irresponsibility and madness.”