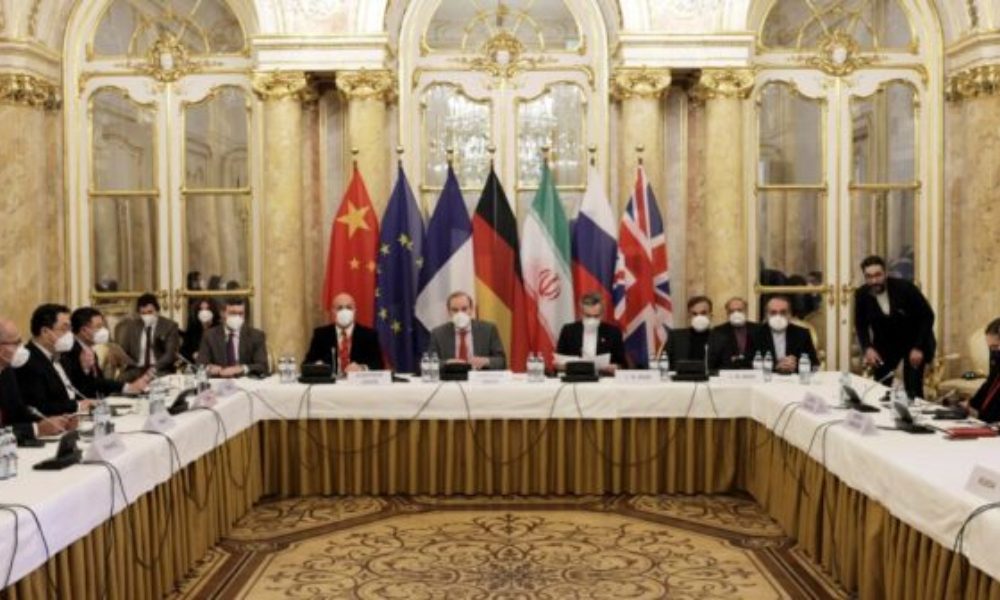 Naftali Bennett, the Israeli Alternate Prime Minster, called upon Joe Biden and his administration to “refrain, even at the last minute, from signing (the) nuclear agreement with Iran”.


He stated that the agreement would send around a quarter trillion dollars to Iran’s terror administration and its regional proxies. It will also allow Iran to build, install, and operate centrifuges in just two years.

“We were able to convince our White House counterparts to resist Iranian demands throughout the past year, even though it was close,” Bennett said. Bennett said that he hoped this would continue.

He stated that Israel was not a party and “isn’t committed to any restrictions stemming form the agreement” and that he would use all tools available to stop the Iranian nuclear program advancing.

Yair Lapid, the Israeli Prime Minister, reiterated Israel’s opposition towards a return of the 2015 nuclear agreement with Iran (Joint Comprehensive Plan of Action – (JCPOA)). He also stated that he would not be obligated to such an agreement in a telephone conversation with French President Emmanuel Macron.

Lapid stated that Israel will do all it can to stop Iran from acquiring a nuclear weapon.

They had a lengthy discussion about the Iranian nuclear problem. According to the statement, the Prime Minister of Israel ”reiterated that it was necessary for a clear message that there will not be any additional concessions to Iran”.

“Prime Minister Lapid stressed that Iran is continuing to negotiate on an offer that was presented as “take or leave it”. He also warned that there are new elements in the offer that go beyond the JCPOA’s limits and that this will open the door for substantial investment to flow into Iran’s terrorist network and strengthen the Iranian military.

According to the Elysee Palace, President Macron has “reiterated France’s commitment to Israel’s security, as well as its determination to contribute dialogue and stability to the region”.

Lapid was informed by the French President about their exchange with Olaf Scholz (German Chancellor), President of the United States, and Boris Johnson (British Prime Minister). The Elysee Palace statement stated that “He expressed his desire to see efforts continue in order to obtain an agreement which would allow a return of compliance with the JCPOA, and that would consider the security interests Israel and other countries within the region.”

The prospect of an agreement is imminent and the head of IAEA said that the U.N. watchdog will not relent in its demand that Iran give an explanation for the presence of undeclared nuclear material at various sites throughout Iran.

Rafael Grossi stated to CNN that abandoning an investigation was not something the IAEA has been used to doing, and it will not be done. “We have an obligation, a legal obligation to clarify many things Iran has not clarified at the moment… We have been trying that for a while.”

He said that it was very easy. We need to know the answer: If there was nuclear material, where is it now? Then we can make a report stating that we have clarified the matter.


This week, a meeting to revive JCPOA

Josep Borrell, EU’s chief of foreign affairs, said that a meeting to discuss reinstating the Iran nuclear agreement could be held “this week”, after Tehran had responded to a proposal by the bloc.

“A meeting was scheduled for Vienna at the end last week, but it was cancelled. Borrell said that it was possible that the meeting will take place this week.

He said that negotiations had been as successful as possible, and that talks had reached a “turning point.”

He said, “Iran has given a response that I found reasonable to transmit to the United States.”

“The United States has yet to respond officially. We are still waiting for their reply and I hope their response will allow me to conclude the negotiations. I hope so, but I can’t guarantee that,” Borrell said.

According to a White House statement, US President Joe Biden discussed ongoing negotiations with Iran on Sunday (21 Aug) during a telephone call with leaders from France, Germany and Britain.

Biden, French President Emmanuel Macron and German Chancellor Olaf Scholz spoke of the “need for strengthening support for partners in Middle East”, as negotiations in Vienna regarding Tehran’s nuclear program appeared to be at an end.

According to the statement, the leaders discussed the necessity to make “joint efforts” to stop Iran from causing instability in the region.

This call comes days after Iran reportedly dropped its preconditionfor reviving 2015’s nuclear deal. The US State Department has requested that the Islamic Revolutionary Guard Corps be removed from its list of foreign terrorist organisations.

CNN cited a senior Biden administration official as revealing that Iran’s response to a European Union draft nuclear agreement proposal this week did not mention Tehran’s previous firm position on the IRGC.