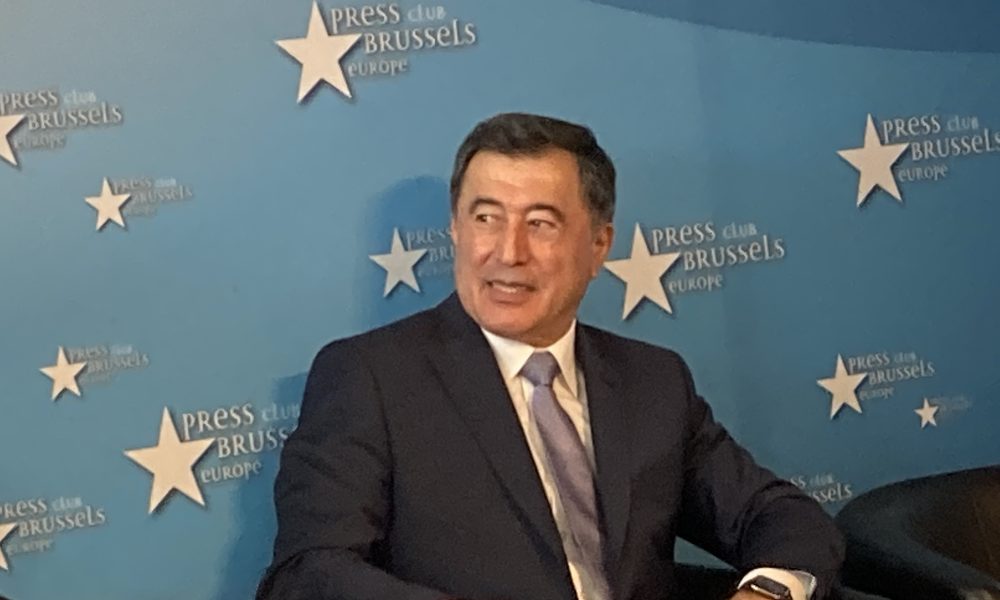 The acting Minister of Foreign Affairs of Uzbekistan, Vladimir Norov, has visited Brussels to meet High Representative Josep Borrell and also take part in a round table on the massive programme of constitutional change underway in his country. He pledged the steady continuation of the transformation of Uzbekistan to democracy, the rule of law and a market economy, writes Political Editor Nick Powell.

Speaking to politicians, diplomats and journalists at the Press Club Brussels Europe, Foreign Minister Norov reflected on the pace of change both in Uzbekistan and in its relationship with the European Union. He had just come from a meeting with High Representative Borrell where they welcomed the recent completion of negotiations on the new Uzbek-EU Enhanced Partnership and Cooperation Agreement.

Mr Borrell had also welcomed the economic and political reforms now underway in Uzbekistan and said he hoped that the reform process would be irreversible. In his remarks at the press club, the Foreign Minister was clear that there was no going back to the constitutional and legal norms adopted 30 years ago in the difficult times that followed independence from the Soviet Union.

He stressed the importance of young people in the reform process. Sixty percent of the Uzbek population is under thirty, with no recollection of Soviet times. Their expectations had driven the public discussion of the new constitution proposed by President Shavkat Mirziyoyev. That national conversation will soon be followed by a referendum.

The Deputy Director for Central Assia of the European External Action Service, Luc Devigne, observed that with the new Uzbek-EU agreement, relations now have a completely different trajectory. “The EU on the side of Uzbekistan” he said, emphasising European support for President Mirziyoyev’s reforms.

Thierry Marini MEP described the reform programme as particularly ambitious. It aims to strengthen civil society, safeguarding the independence of political parties, trade unions and other non-governmental organisations. Freedom of speech and of publication will be guaranteed, property rights strengthened and monopolies eliminated.

Entrepreneurs will have the right to carry out any legal activity and to retain profits. There will be special protections of the independence of the teaching profession. Defendants, not law enforcement will have the benefit of any room for doubt in legal proceedings. Eldor Tulyakov from the Development Strategy Centre in Tashkent explained that many reforms were already happening but needed to be enshrined in the constitution.

Iuliu Winkler MEP said there is now a positive majority in the European Parliament in favour of enhancing Uzbek-EU relations. He stressed the importance of labour rights and environmental sustainability. Qodir Djuraev, a member of the Uzbek parliament said medical, public health and environmental protections would be written into the new constitution. He stressed Uzbekistan’s efforts to ameliorate the environmental damage caused by the destruction of the Aral Sea in Soviet times.

Foreign Minister Norov said child labour and forced labour, once found particularly in the cotton industry, had been eliminated. Uzbekistan’s ancient silk industry, which had been lost under the Soviet Union, was being revived. He also addressed the issue of the violent protests against the new constitution in the autonomous republic of Karakalpakstan.

The Foreign Minister said suggested changes to the republic’s constitutional relationship with the rest of Uzbekistan had been proposed within Karakalpakstan itself. As the potential loss of autonomy was not wanted, the President had dropped the idea. The violence had been unnecessary in a democracy.

Local freedom of action across Uzbekistan will be enhanced by strengthening the Mahallas, the traditional forums for resolving problems. Their independence from executive intervention will be constitutionally guaranteed.

Vladimir Norov summed up President Mirziyoyev’s vision as a country where people can openly talk about their problems and solve them together, equal before the law. Or as the Uzbek President has himself put it, state institutions must serve the people, not he other way round.