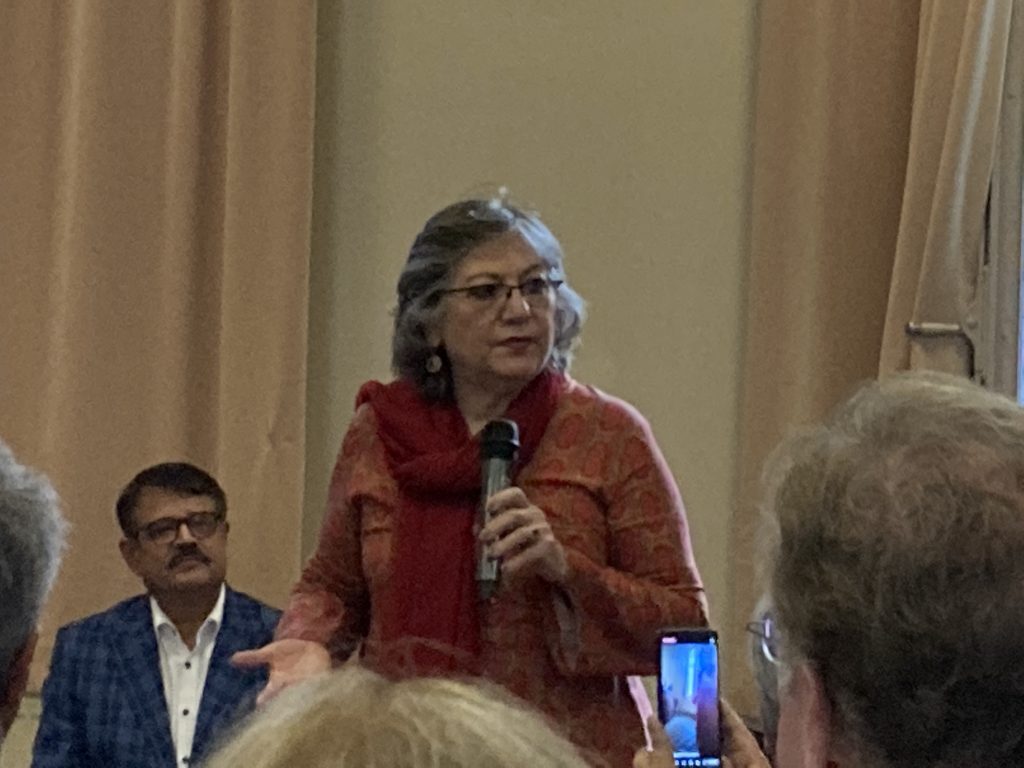 In Brussels, a book that is based on letters Faiz Ahmed Faiz, a renowned Pakistani poet, launched. Moneeza Hashimi’s (pictured), ‘Conversations With My Father – Forty Years Later, A Daughter Responds’, recalls a close, but not necessarily intimate relationship with a journalist, poet, and human rights activist who was subject to periods of exile and imprisonment.

Moneeza hashmi said that her book about her father was not a memoir, a catharsis or a biography, but a conversation she never had. As part of the activities marking the 75th anniversary of Pakistani independence, the Embassy of Pakistan organized the ceremony in cooperation with the European Literary Circle.

Her father was Faiz Ahmed Faiz, a legendary poet. Pakistan’s Ambassador in the European Union, Dr Asadmajeed Khan, described him as one of the most important poets of Urdu, with a unique literary focus that focuses on democracy, fundamental freedoms, and labour rights as well as social and political equality.

Moneeza hashmi stated that her father’s poetry is beloved because it was written for and by the people. She described the way he depicted the ordinary people and transformed them into classical poetry.

There were also readings of Faiz Ahmed Faiz poems in Urdu and English. Even though the translations couldn’t capture the beauty of the original, the poems were able to show how the people felt about them.

“Even if your feet are shackled, you can still do it.”

Another encouraged bravery and boldness.

“Speak, because truth is not yet dead.

“Speak, speak, and whatever you need to speak.”

Moneeza hashmi stated that she was inspired to write the book to show her father in the way she and her sister know him. It’s based on the many letters and postcards that he sent her during their long separation, which was caused by his activism, his imprisonment, and his exile to Lebanon.

Although her contemporary responses are lost, she responds again, almost forty years after her father’s death and with all of the knowledge and perspective that her life and career have provided her. She was Pakistan Television’s first female Director of Programs, and worked there for more than 40 years.

Moneeza hashmi describes her father as “the one closest to me while I was alive and after he died”. However, she also depicts the pain of separation with her regret over not being able to connect with him in her lifetime. “And so, I thought of telling my father all the things I should have shared with them then and now.”

Beautifully written, “Conversations With My Father – Forty Years on a Daughter Responds” is beautifully illustrated with original postcards, letters and photographs. It is available in Belgium by Sang-e-Meel Publications for EUR20.