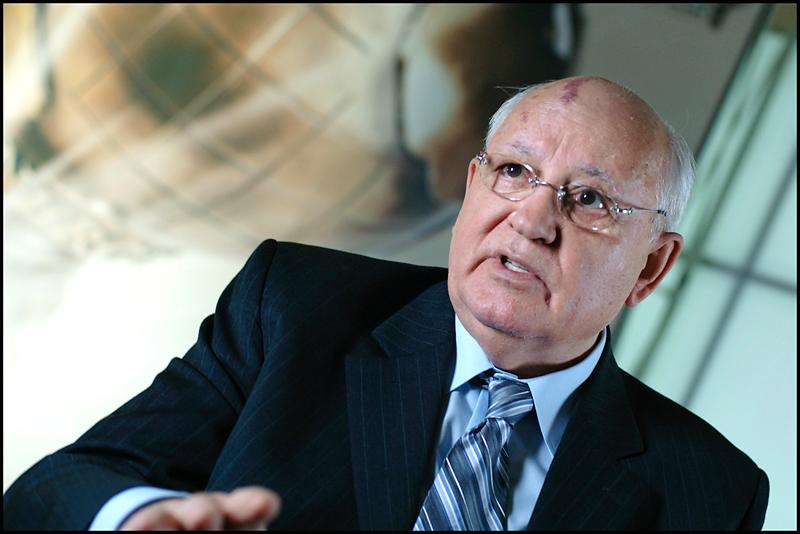 Mikhail Gorbachev made a plea for dialogue and renounced the use of force during a visit to the European Parliament.

The former president of the Soviet Union was at the Parliament in 2008 for the Energy Globe Award where he picked up a lifetime achievement award. To mark the passing on 30 August of the last leader of the Soviet Union, who was praised by many for his role in bringing the Cold War to a peaceful end, we are republishing an interview from his visit. He talked about how countries should work together in the era of globalisation and his concerns about the environment.

You initiated momentous changes in the Soviet Union and did much to end the Cold War. What lessons can we draw from that experience when seeking a so called “world perestroika” to end the hot war against nature?

In the mid-80s the leaders of the big states realised that there is an urgent need to do something. Then God made the ways of Gorbachev, Reagan, Bush, Thatcher, Mitterrand and others – and they were wise enough to overcome clichés and prejudices regarding each other and start talking about the nuclear threat. Now the world and our times are different, there is globalisation, countries are more interdependent and countries like Brazil, China and India have come onto the stage.

The most important lesson we can take is that a dialogue has to be developed. Confidence has to be built. We have to renounce the politics of force, they bring nothing good. We have to understand that we all are in the same boat, we all have to paddle, if not, some are paddling, some are pouring water in, others might even be making a hole in it. Nobody will win in this manner in this world.

Look at the US in Iraq, everybody was opposed, even their allies, but they did not listen and what happened? They do not know how to get out of it now. Now we understand that… we are all linked to the US and if it falls apart it would be a real collapse. We have to help them to get out of there. That means that cooperation is needed, a new world order is necessary and global mechanisms to manage it.

After the Cold War everybody was talking of the new world order, even the Pope joined us and said a new world order is necessary, more stable, more fair, more human.

However, when the USSR fell apart – because of internal reasons first of all – the US could not resist the temptation to use the confusion. Political elites changed, those who brought the world out of the Cold War left the stage, the new ones wanted to write their history.

These errors of vision, poor decisions and missteps made the world ungovernable. We live in a world of chaos. New ways of life and new political mechanisms can emerge from the chaos, but the chaos can also lead to disruption, resistance and armed conflict.

Can we really call environmental degradation mankind’s no. 1 problem when so many people are living under the poverty line?

The major problems are poverty, air and water quality, unsanitary conditions, low agricultural productivity, but all of them are about ecology. It is nonsense to say that ecology is a luxury – it is the major priority of our times. The second priority is the fight against poverty because two billion are living on $1-2 a day. The third one is global security, including the nuclear threat and weapons of mass destruction. These are three urgent priorities, but I put ecology in the first place, because it directly touches all of us.

“Towards a New Civilization” is the motto of the Gorbachev Foundation. What does that New Civilisation look like? Where can the world get the huge resources needed for these fundamental changes?

It is not always about money. If international issues are handled in a disorderly way, you need more money. It is about trust, co-operation, dialogue, mutual help and mutual exchange. Why is Europe growing economically – because of the existence of the EU. This is the path of new opportunities and the EU is a good example.

Of course, not everything is perfect. In my view the EU is already overcharged as a system. It has to have wisdom and know when to stop, absorb, move forward, not just hurry and make hasty headlong jumps.