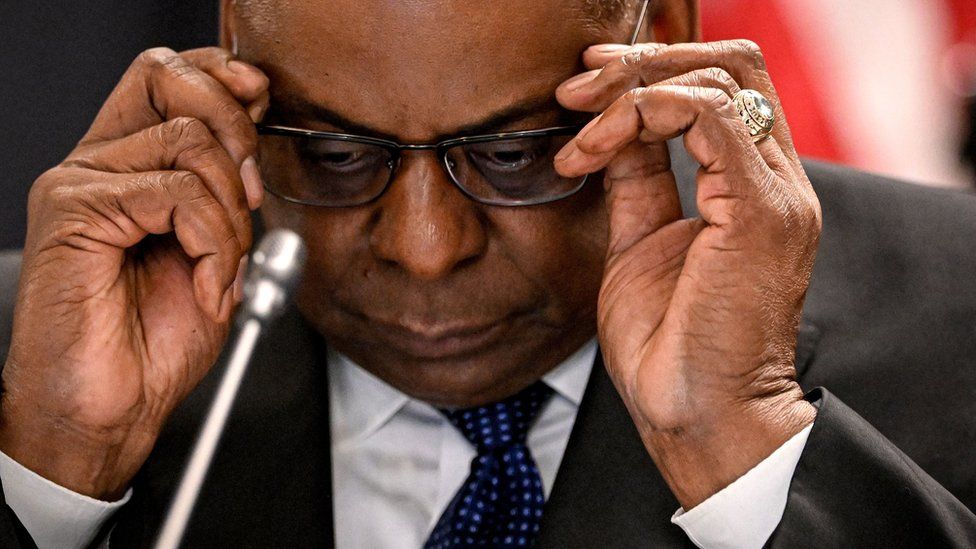 The US has approved nearly $2.7bn (£2.3bn) in new aid for Ukraine and allies, including $675m in weapons for Ukraine as it battles Russia.

Defence Secretary Lloyd Austin announced the arms package at a meeting with dozens of fellow ministers at the US air base in Ramstein, Germany.

The US has already pledged about $13bn in military aid for Ukraine.

The Biden administration said on Thursday it had earmarked $2bn in long-term assistance in the form of investments to bolster the security of Ukraine and 18 of its neighbours, including both Nato members and non-members at risk of future Russian aggression.

It said it would notify Congress of the aid plan.

US Secretary of State Anthony Blinken arrived in the Ukrainian capital Kyiv, as his colleague urged Ukraine’s allies to commit to supporting the country for as long as necessary and be prepared to adapt the type of support offered.

In Kyiv, Mr Blinken said that the aid would be delivered at a “pivotal” moment during the war, with Ukrainian operations against Russian forces “proving effective”.

He also vowed that the US and its allies would “continue to exert that pressure until the aggression ceases and Ukraine is fully sovereign and independent”.

President Joe Biden wants to end America’s “forever wars”, but he is pumping billions of dollars into one that could grind on for a long time.

After six months, Russia’s invasion of Ukraine is entering a challenging new phase. Europe is facing a hard winter of high prices and fuel shortages because of the fallout from sanctions against Moscow and President Vladimir Putin’s suspension of Russian gas supplies.

Meanwhile, Ukraine has launched a counteroffensive in the south of the country to try to break a stalemate on the battlefield and convince struggling allies it’s worth staying the course.

Secretary of State Antony Blinken’s visit to Kyiv was designed to underline that message by emphasising the Americans are committed to seeing this through.

For Washington, of course, the stakes are bigger than Ukraine. The Biden administration – and a bipartisan majority in Congress – believes the Russian invasion threatens to rip up the rules of the liberal global order largely established by the US after World War Two.

Despite that, President Biden’s long game is not directed at a fast and decisive Ukrainian victory. His arms shipments have been calibrated by the fear that tensions could escalate into direct conflict with Russia.

Some analysts and lawmakers have described the goal as preventing defeat rather than powering a win, and demanded the president be more aggressive. Others have said a win isn’t possible and urged him to press for a ceasefire and a negotiated settlement.

The administration argues that Russia isn’t serious about finding a diplomatic solution and Ukraine doesn’t have the leverage to press for one.

In Washington, US President Joe Biden held a call with a number of US allies – including UK Prime Minister Liz Truss and German Chancellor Olaf Scholz – in which they reiterated their collective support for Ukraine.

On Wednesday, Ukrainian President Volodymyr Zelensky said his country’s military had recently carried out successful attacks against Russian forces which control large areas of Ukraine in the south and the east – and retaken settlements near the north-eastern city of Kharkiv. While in Kyiv, Mr Blinken received a briefing from Ukrainian officials on the counter-offensive.

He did not give details but both Ukrainian and pro-Russian officials report fighting around Balakleya, 60km (38 miles) south-east of Kharkiv.

Russian President Vladimir Putin denied reverses on Wednesday, saying: “We have not lost anything and will not lose anything.”

Russia says it is fighting neo-Nazis in Ukraine – a claim widely dismissed – and that it is threatened by the Nato alliance’s strong relations with Ukraine.

Since the invasion on 24 February, the UN has recorded at least 5,718 civilian deaths, with 8,199 injured, and more than seven million Ukrainians have been recorded as refugees across Europe. An unknown number of combatants have been killed or injured.

Russia, a global energy supplier, is locked in an economic struggle with the West which imposed sweeping sanctions in response to the invasion.