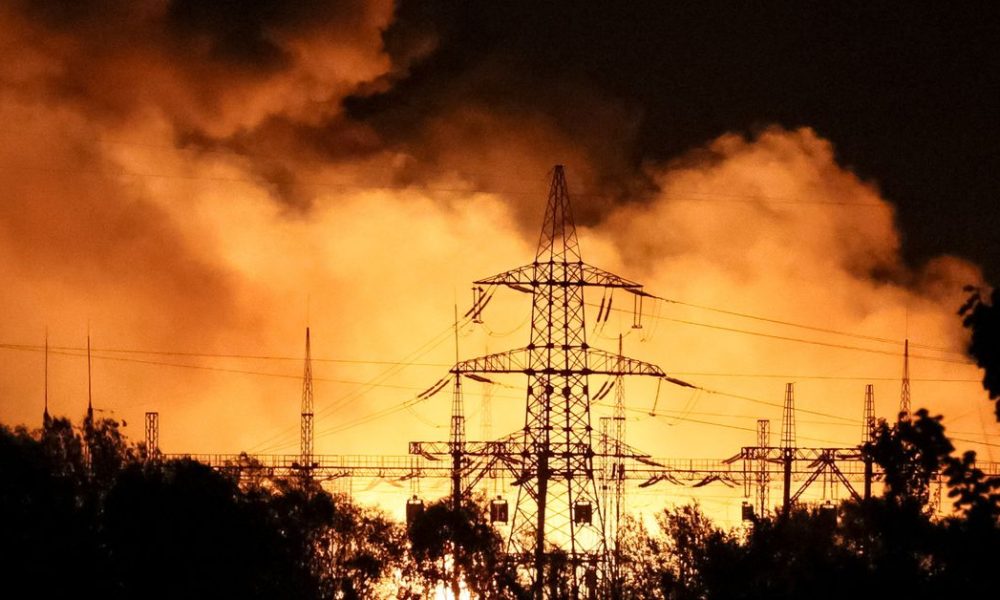 Ukraine accused the Russian military of attacking civilian infrastructure in response to a rapid weekend offensive by Ukrainian troops that forced Russia to abandon its main bastion in the Kharkiv region.

“No military facilities, the goal is to deprive people of light and heat,” Ukrainian President Volodymyr Zelenskiy wrote on Twitter late on Sunday (11 September).

Zelenskiy has described Ukraine’s offensive in the northeast as a potential breakthrough in the six-month-old war, and said the winter could see further territorial gains if Kyiv received more powerful weapons.

In the worst defeat for Moscow’s forces since they were repelled from the outskirts of the capital Kyiv in March, thousands of Russian soldiers left behind ammunition and equipment as they fled the city of Izium, which they had used as a logistics hub.

Ukraine’s chief commander, General Valeriy Zaluzhnyi, said the armed forces had regained control of more than 3,000 square km (1,158 square miles) since the start of this month.

Ukraine’s gains are important politically for Zelenskiy as he seeks to keep Europe united behind Ukraine – supplying weapons and money – even as an energy crisis looms this winter following cuts in Russian gas supplies to European customers.

Ukraine’s General Staff said on Monday (12 September) defence forces had dislodged the enemy from more than 20 settlements in the past day.

Near the Russian border, in the village of Kozacha Lopan north of Kharkiv, Ukrainian soldiers and local officials were greeted by residents with hugs and handshakes.

“Kozacha (Lopan) is and will be Ukraine,” district Mayor Vyacheslav Zadorenko said on a video he posted on Facebook on Sunday. “No ‘Russian World’ whatsoever. See for yourselves where the ‘Russian World’ rags are lying around. Glory to Ukraine, glory to the Ukrainian Armed Forces.”

Moscow’s almost total silence on the defeat – or any explanation for what had taken place in northeastern Ukraine – provoked significant anger among some pro-war commentators and Russian nationalists on social media. Some called on Sunday for President Vladimir Putin to make immediate changes to ensure ultimate victory in the war.

Zelenskiy said late on Sunday that Russian attacks caused a total blackout in the Kharkiv and Donetsk regions, and partial blackouts in the Zaporizhzhia, Dnipropetrovsk and Sumy regions.

Mykhailo Podolyak, an adviser to Ukraine’s president, said Kharkiv’s CHPP-5 electricity station – one of the largest in Ukraine – had been hit.

“A coward ‘response’ for the escape of its own army from the battlefield,” he said on Twitter.

Kyrylo Tymoshenko, the deputy head of the president’s office, posted an image on Telegram of electrical infrastructure on fire but added power had been restored in some regions.

But he said the offensive had gone far better than expected, describing it as a “snowball rolling down a hill”.

“It’s a sign that Russia can be defeated,” he said.

Britain’s defence ministry said on Sunday that fighting continued around Izium and the city of Kupiansk, the sole rail hub supplying Russia’s front line across northeastern Ukraine, which has been retaken by Ukraine’s forces.

Leonid Pasechnik, the head of the Luhansk People’s Republic, was quoted by Russian news agencies saying Ukrainian forces were attempting to penetrate the eastern region, claimed by Russia at the beginning of July.

“Ukrainian sabotage and reconnaissance groups have not stopped their attempts to infiltrate the territory of the republic for the purpose of provocation and intimidating our citizens,” he said, adding there had been “no retreat from positions held by the republic.”

As the war entered its 200th day, Ukraine on Sunday shut down the last operating reactor at Europe’s biggest nuclear power plant to guard against a catastrophe as fighting rages nearby.

Russia and Ukraine accuse each other of shelling around the Russian-held Zaporizhzhia plant, risking a release of radiation.

The International Atomic Energy Agency said a backup power line to the plant had been restored, providing the external electricity it needed to carry out the shutdown while defending against the risk of a meltdown.

French President Emmanuel Macron told Putin in a phone call on Sunday the plant’s occupation by Russian troops is the reason why its security is compromised, the French presidency said. Putin blamed Ukrainian forces, according to a Kremlin statement.

France on Sunday said it would sign an agreement with Romania to help increase Ukrainian grain exports.

Ukraine’s grain exports have slumped since the start of the war because its Black Sea ports were closed off, driving up global food prices and prompting fears of shortages.

“Tomorrow, I will sign an accord with Romania that will allow Ukraine to get even more grains out … towards Europe and developing countries, notably in the Mediterranean (countries)which need it for food,” Transport Minister Clement Beaune told France Inter radio.

The International Monetary Fund is also looking for ways to provide emergency funding to countries facing war-induced food price shocks and will discuss measures at an executive board meeting on Monday, sources familiar with the matter said.