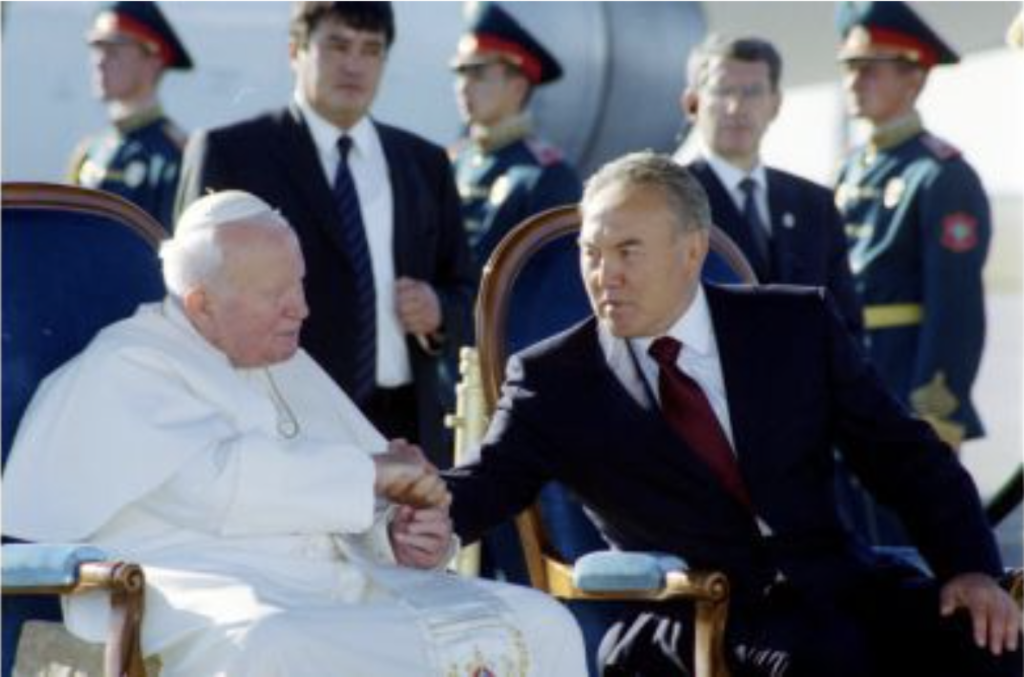 Kazakhstan is a country of diverse cultures and religions. They coexist in harmony, respect, and tolerance. It is not by chance that the 7th Congress of Leaders of World and Traditional Religions is to take place in the country’s capital, Nur-Sultan, on the 14th and 15th of September. During the same period, the Pope will also be a guest in the country. The state visit of Pope Francis will take place for the first time since Pope John Paul II visited Kazakhstan in 2001 under the motto ‘Love One Another’, writes Mauricio Ruiz.

Upon landing in Kazakhstan today (13 September), the Pope will pay a courtesy visit to the Kazakh President Kassym-Jomart Tokayev, as well as a formal speech addressing the diplomatic corps accredited in the country and the civil society. On Wednesday, he will have a moment of silent prayer with religious leaders, and address them during the Congress’ opening and plenary session. The Pope will then meet with some of the leaders privately. In the afternoon, he will celebrate Mass for the country’s Catholics.

About 100 delegations from 60 countries are expected to take part in the Congress, including representatives of Islam, Christianity, Judaism, Shintoism, Buddhism, Zoroastrianism, Hinduism and other religions. Among them are Pope Francis, Supreme Imam of Al-Azhar Ahmed Mohamed Ahmed at-Tayeb, Patriarch Theophilos III of Jerusalem, Chief Ashkenazi Rabbi David Lau, Chief Sephardi Rabbi of Israel Yitzhak Yosef and other religious leaders, as well as representatives of a number of international organizations.

This year, the theme of the Congress is “The role of leaders of world and traditional faiths in the socio-spiritual development of mankind in the post-pandemic period.” Four panel sessions will be organized, focusing on questions on the role of religions in strengthening spiritual and moral values, education and religious studies in promoting peaceful coexistence of religions, countering extremism, radicalism and terrorism, especially on religious grounds, as well as the contribution of women to the well-being and sustainable development of society.

For Kazakh society, religious traditions of various ethnic groups have become a bridge that unites diverse communities and builds cohesion across the country. This attitude has nourished mutual respect and tolerance toward each other. With a population of nearly 19 million, the word Kazakhstan means home for more than 135 ethnic groups and 18 denominations.

Roughly 65 percent of Kazakshtan’s 18.6 million people are Muslims, most of whom are Sunni following the Hanafi school of teaching. Roughly 26% of Kazakhstanis are Christian (wide majority Orthodox, a minority Catholic), and the remaining 5% follow Judaism or other beliefs.

The majority of Christian citizens are Russians, Ukrainians and Belarusians, who belong to the Eastern Orthodox Church in Kazakhstan under the Moscow Patriarchate. About 1.5 percent of the population is ethnically German, most of whom are Catholic or Lutheran. There are also many Presbyterians, Jehovah’s Witnesses, Seventh-day Adventists and Pentecostals. Methodists, Mennonites, and Mormons have also registered churches in the country.

Historians believe that as early as the second century AD in the town of Merv, today known as Mary, ((in Turkmenistan, not too far from Kazakhstan’s border) there were Christians among Roman soldiers taken prisoners after a battle they lost against the Persians.

According to the Roman Observatory, the history of the Catholic Church in Kazakhstan resumed in the 20th century when Stalin ordered the deportation to Central Asia of whole peoples of the Catholic tradition. Providence turned a diabolical plan into a missionary event beyond the boldest dreams of even Propaganda Fide or any missionary strategist. From 1930 onwards, many priests were deported and sent to concentration camps in Kazakhstan.

In 1980, when the Church of St Joseph in Karaganda was consecrated, built after endless disputes between the Soviet authorities and the people, and not only Catholics, did Bishop Chira reveal his identity. It is moving to think of this bishop humbly teaching the faith to hundreds of young people, many future priests (including Bishop Joseph Werth, Titular of Bulna and Apostolic Administrator of West Siberia of the Latins) without revealing his authority even to his parish priest.

In 1991, Pope John Paul II appointed Fr Pavel Lenga as Apostolic Administrator of Karaganda for Catholics of Latin Rite in Kazakhstan, and the other four former Soviet territory Republics of Central Asia, Uzbekistan, Talikistan, Kyrgyzstan and Turkmenistan. He was ordained at Krasnoarmiejsk but the Episcopal See is Karaganda, the main centre of Catholicism in Kazakhstan.

On 25 June 1995, Bishop Lenga consecrated Kazakhstan to Mary Queen of Peace at the shrine dedicated to Our Lady under this title at Oziornoje, northern Kazakhstan.This is the only Marian shrine in this part of the world. It was built as an act of thanksgiving by deported Poles who in 1941 were literally dying of hunger. A nearby lake was miraculously filled with fish and the people survived. In 1994 diplomatic relations between the Holy See and Kazakhstan were established.

In 1999, Astana received an Apostolic Administration as did Almaty and Atyran. There are 250 parishes; 20 churches have been built so far, there are 63priests, 74 religious sisters and in 1998 a major seminary was opened under the title Mary, Mother of the Church.

1. Cathedral of the Blessed Virgin Mary of Fatima

The cathedral of the Blessed Virgin Mary of Fatima, located in Karaganda, is the largest Catholic church in Kazakhstan. For its construction, the Cathedral in Cologne, Germany, was used as a model. The consecration of the cathedral took place on September 9th, 2012. In the warm season, it also hosts concerts of organ, symphonic and choral music.

St. Joseph’s Basilica was constructed in the 1970s while Kazakhstan was a Republic of the Soviet Union, at the request of Catholics in exile. The church was approved in 1977 and dedicated in 1980, at which point it became a focal point for the country’s Catholic community. In September of 2020, the Vatican has named St. Joseph Church the first minor basilica in Central Asia, a region that includes Kazakhstan, Uzbekistan, Tajikistan, Kyrgyzstan, and Turkmenistan.

The Cathedral of the Temple of Holy Ascension (1904-1907) in Almaty, also known as Zenkov’s Cathedral (in honor its architect Andrei Zenkov), is located in the Park of 28 Panfilov Guardsmen. It is the main Russian Orthodox Church in Kazakhstan, and is included in the list of historical and cultural monuments of Kazakhstan. The church brings together local and Russian architecture as both Kazakh and Russian people participated in its construction.

The church is one of the tallest wooden buildings in the world and the tallest Orthodox wooden church. The highest point at the upper end of the cross on the main dome is 39.64 meters, at the top of the bell tower – 46 metres.

2. Church of the Exaltation of the Holy Cross in Almaty

This Orthodox church is located in Almaty, in the Karasu district (Vysokovoltnaya Street). Built in 2011, the Church in Honor of the Exaltation of the Holy Cross was designed in Byzantine style, with a height of 33 meters.

This cathedral has beautiful blue roofs with side semi-domes. Completed in 2009, this 68 m tall structure serves as the main place of worship for Orthodox Christians in Nur-Sultan. A triple-decked 18 m tall iconostasis with more than 50 icons, gilded doors, elaborate wood carvings, and gold-leafed murals creates a majestic atmosphere, enhanced by the cathedral’s acoustics.

It houses relics of 20 different saints in the church. A library and a reception hall stand adjacent to the cathedral, with a life-size statue of St. Nicholas next to the stairs leading to the main entrance. Having served in the past as a museum of atheism and a stable, the church has been reopened to worshippers since 1980.