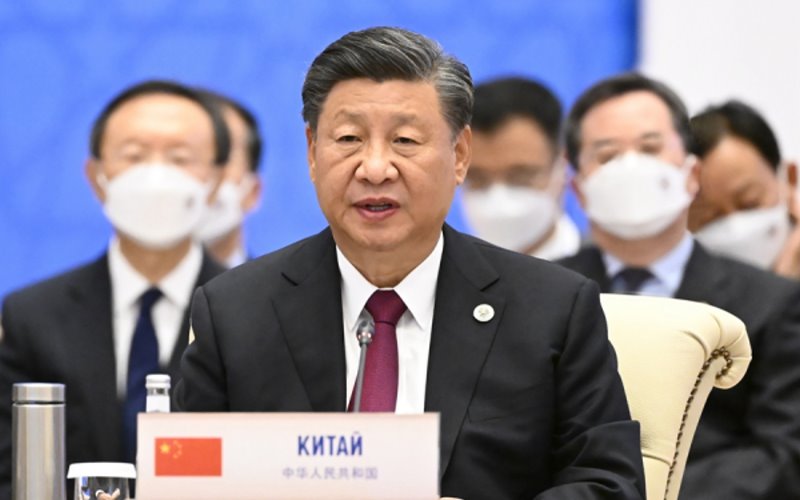 On 16 September, President Xi Jinping attended the 22nd Meeting of the Council of Heads of State of the Shanghai Cooperation Organization (SCO) at the Samarkand Congress Center.

President Xi delivered a statement entitled “Ride on the Trend of the Times and Enhance Solidarity and Cooperation to Embrace a Better Future”.

President Xi pointed out that this year marks the 20th anniversary of the SCO Charter and the 15th anniversary of the Treaty on Long-Term Good-Neighborliness, Friendship and Cooperation Between the SCO Member States. Guided by the two founding documents, the SCO has succeeded in exploring a new path for the development of international organizations, and there is much to be drawn upon from its rich practices, including political trust, mutually beneficial cooperation, equality, openness and inclusiveness, and equity and justice. These five points fully embody the Shanghai Spirit, namely mutual trust, mutual benefit, equality, consultation, respect for diversity of civilizations and pursuit of common development. This spirit has proved to be the source of strength for the development of the SCO and the fundamental guide that the SCO must continue to follow in the years to come. We owe the SCO’s remarkable success to the Shanghai Spirit, and we will continue to follow its guidance as we forge ahead.

President Xi noted that the world today is undergoing accelerating changes unseen in a century, and it has entered a new phase of uncertainty and transformation. Human society has reached a crossroads and faces unprecedented challenges. Under these new conditions, the SCO, as an important constructive force in international and regional affairs, should keep itself well-positioned in the face of changing international dynamics, ride on the trend of the times, strengthen solidarity and cooperation and build a closer SCO community with a shared future.

First, we need to enhance mutual support. We should strengthen high-level exchanges and strategic communication, deepen mutual understanding and political trust, support each other’s efforts to uphold security and development interests, jointly oppose interference in other countries’ internal affairs under any pretext, and hold the future of our respective countries firmly in our own hands.

Second, we need to expand security cooperation. We welcome all parties to get involved in implementing the Global Security Initiative, stay true to the vision of common, comprehensive, cooperative and sustainable security, and build a balanced, effective and sustainable security architecture. We should crack down hard on terrorism, separatism and extremism, drug trafficking, and cyber and transnational organized crimes; and we should effectively meet the challenges in data security, biosecurity, outer space security and other non-traditional security domains. China is ready to train 2,000 law enforcement personnel for SCO member states in the next five years, and establish a China-SCO base for training counter-terrorism personnel, so as to enhance capacity-building for law enforcement of SCO member states.

Third, we need to deepen practical cooperation. China is ready to work with all other stakeholders to pursue the Global Development Initiative in our region to support the sustainable development of regional countries. We need to implement the statements on safeguarding international energy and food security adopted by this summit. China will provide developing countries in need with emergency humanitarian assistance of grain and other supplies worth 1.5 billion yuan. We should fully implement the cooperation documents in such areas as trade and investment, infrastructure building, protecting supply chains, scientific and technological innovation and artificial intelligence. It is important to continue our efforts to achieve the complementarity of the Belt and Road Initiative with national development strategies and regional cooperation initiatives. Next year, China will host an SCO ministers’ meeting on development cooperation and a forum on industrial and supply chains, and will set up a China-SCO Big Data Cooperation Center to create new engines of common development. China stands ready to carry out space cooperation with all other parties to support them in agricultural development, connectivity and disaster mitigation and relief.

Fourth, we need to enhance people-to-people and cultural exchanges. We should deepen cooperation in such areas as education, science and technology, culture, health, media, and radio and television, ensure the continued success of signature programs such as the youth exchange camp, the women’s forum, the forum on people-to-people friendship, and the forum on traditional medicine, and support the SCO Committee on Good-Neighborliness, Friendship and Cooperation and other non-official organizations in playing their due roles. China will build a China-SCO ice and snow sports demonstration zone and host SCO forums on poverty reduction and sustainable development and on sister cities next year. In the next three years, China will carry out 2,000 free cataract operations for SCO member states and provide 5,000 human resources training opportunities for them.

President Xi emphasized that upholding peace and development of the Eurasian continent is the shared goal of countries both in our region and the world at large, and the SCO shoulders an important responsibility in meeting this goal. By promoting the development and expansion of the SCO and giving full play to its positive impact, we will create strong momentum and new dynamism for ensuring durable peace and common prosperity of the Eurasian continent and the whole world. China supports advancing SCO expansion in an active yet prudent manner. We need to seize the opportunity to build consensus, deepen cooperation and jointly create a bright future for the Eurasian continent.

President Xi pointed out that in the course of this year, China has continued to respond to COVID-19 and promote economic and social development in a well-coordinated way. Thus, to the greatest extent possible, China has both safeguarded the life and health of the people and ensured overall economic and social development. The fundamentals of China’s economy, characterized by strong resilience, enormous potential, ample room for policy adjustment and long-term sustainability, will remain sound. This will greatly boost the stability and recovery of the world economy and provide more market opportunities for other countries. Next month, the Communist Party of China will convene its 20th National Congress. At this national congress, the Communist Party of China will fully review the major achievements made and valuable experience gained in China’s reform and development endeavors. It will also formulate programs of action and overarching policies to meet China’s new development goals on the journey ahead in the new era and the new expectations of the people. China will continue to follow the Chinese path to modernization to achieve the rejuvenation of the Chinese nation, and it will continue to promote the building of a community with a shared future for mankind. By doing so, it will create new opportunities for the world with new advances in its development and contribute its vision and strength to world peace and development and to human progress.

In conclusion, President Xi underscored that long as the journey is,  we will surely reach our destination when we stay the course. Let us act in the Shanghai Spirit, work for the steady development of the SCO, and jointly build our region into a peaceful, stable, prosperous and beautiful home.

Leaders of SCO member states signed and released the Samarkand Declaration of the Council of Heads of State of the Shanghai Cooperation Organization. At the meeting, several statements and documents were issued on protecting international food and energy security, tackling climate change, and keeping supply chains secure, stable and diversified; a memorandum of obligations on Iran’s SCO membership was signed; the procedure for Belarus’ accession was started; MOUs granting Egypt, Saudi Arabia and Qatar the status of SCO dialogue partners were signed; agreement was reached on admitting Bahrain, the Maldives, the UAE, Kuwait and Myanmar as new dialogue partners; and a series of resolutions were adopted, including a Comprehensive Plan for the Implementation of the SCO Treaty on Long-Term Good-Neighborliness, Friendship and Cooperation for 2023-2027. It was decided at the meeting that India will assume the SCO rotating presidency for 2022-2023.