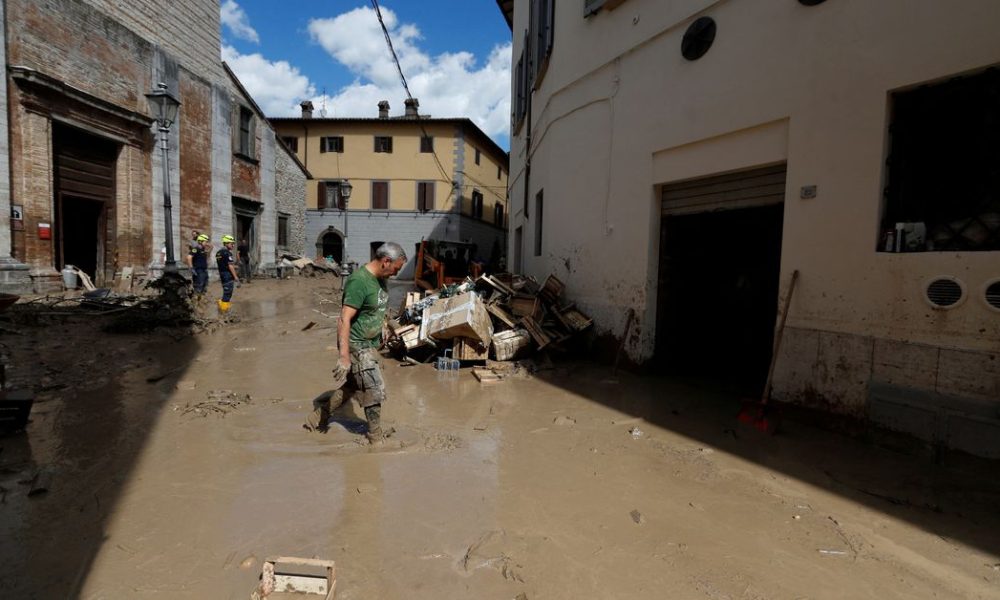 In Cantiano, a village close to the neighbouring Umbria region, residents were clearing mud from the streets, Reuters footage showed, after torrents had swept through several towns leaving a trail of trapped and damaged cars.

“My fruit shop has been turned upside down,” said Luciana Agostinelli, a local resident.

Around 400 millimetres (15.75 inches) of rain fell within two to three hours, the civil protection agency said, a third of the amount usually received in a year.

“It was like an earthquake,” Ludovico Caverni, the mayor of Serra Sant’Abbondio, another village hit by the floods, told RAI state radio.

Footage released by fire brigades showed rescuers on rafts trying to evacuate people in the seaside town of Senigallia, while others attempted to clear an underpass of debris.

Paola Pino d’Astore, an expert at the Italian Society of Environmental Geology (SIGEA), told Reuters the floods were due to climate change and were not easy to predict.

“It is an irreversible phenomenon, a taste of what our future will be,” she said.

Some 300 firefighters are currently operating in the area and have rescued dozens of people who had climbed on roofs and trees overnight to escape the floods, the fire brigade said.

Stefano Aguzzi, head of civil protection at Marche’s regional government, said the downpour was far stronger than had been forecast.

“We were given a normal alert for rain, but nobody had expected anything like this,” he told reporters.

Enrico Letta, leader of the centre-left Democratic Party, said it would suspend campaigning in Marche “in a sign of mourning” and to allow its local activists to participate in efforts to help the flood-hit communities.