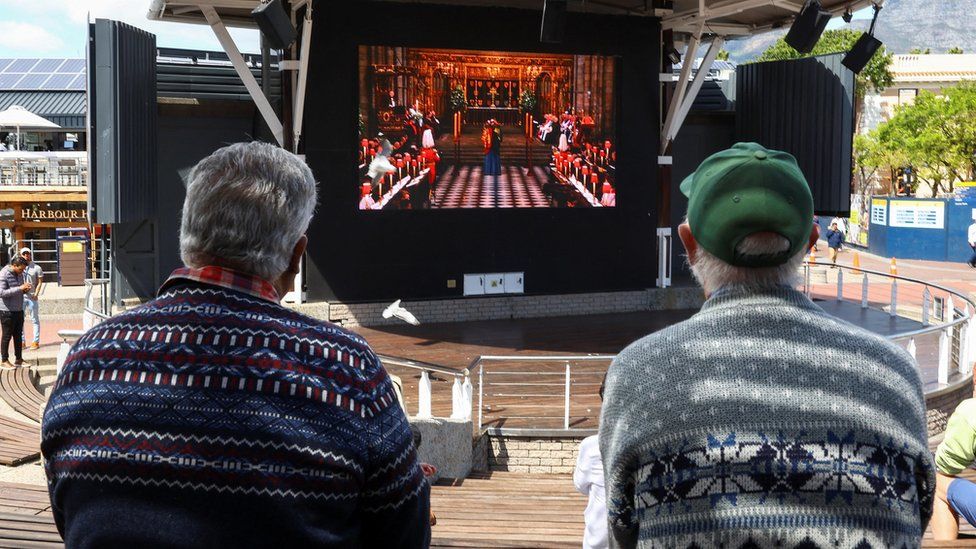 Around 2,000 mourners were in Westminster Abbey for the state funeral of Queen Elizabeth II, including presidents, prime ministers and foreign royalty.

But millions more people around the world saw the live broadcast, with the event likely to be one of the most-watched in history.

The BBC’s correspondents joined just a few of them as Britain’s longest-reigning monarch was put to rest.

Nepal: ‘Our country has lost an old friend’

British Gurkha veterans are watching the funeral of the Queen at a special screening at the UK embassy in Kathmandu, Nepal.

Thousands of miles away from London, it’s a poignant moment for the men who served the Queen all of their working lives.

Apart from being in the Gurkha regiment of the UK military, many also served as the Queen’s orderly officers, accompanying her to military investiture ceremonies.

“She was a very kind Queen. May her soul rest in peace,” said Retd Major Bhim Bahadur Gurung, who served as the Queen’s orderly in 1975.

Earlier in the day, prayers were offered for Queen Elizabeth at a monastery in Kathmandu. Monks chanted Buddhist mantras or verses praying for peace for the Queen and everyone connected to her. People lit lamps in memory of Her Majesty. A minute of silence was observed.

“It’s a huge loss for us Gurkhas. But also for Nepal. We have a very good relationship with the royal family,” said Major Yam Bahadur Rana.

Nepal was not a colony of the British Empire, and one of the reasons is the more than 200 year agreement which allows Gurkhas to serve with the UK military. And so there’s a lot of affection for the British monarchy in the country.

“With the demise of the Queen, Britain has lost its devoted and kind parent and Nepal has lost an old friend and well-wisher,” Nepal’s president Bidhya Devi Bhandari said.

United Arab Emirates: ‘The procession left a lump in my throat’

The mood is sombre on board the ship Queen Elizabeth 2 in Dubai, where hundreds have gathered to witness the historic state funeral. For many it is an emotional moment to watch the Queen’s final journey aboard the 13-deck former cruise liner, named after the late monarch.

The British ocean liner was launched by the Queen in 1969 in Scotland. It sailed across the world for 40 years before it was retired in 2008 and sold to a Dubai government entity. It has been operated as a floating hotel since 2018.

Since the Queen’s death, more than 3,000 people have visited the ship to sign the condolence book. There’s a picture of the late Queen beside the book, with many visitors leaving flowers, written tributes, cards and soft toys by the gold bust of Queen Elizabeth II.

One teary-eyed mourner told me that this was one of the most “shattering and upsetting” moments of her life, while another said she couldn’t stop her tears on several occasions through the whole ceremony.

“The grandness of the occasion with the coffin draped with the flag, the crown and the procession left a lump in my throat.”

South Africa: ‘We were born on the same day’

At a residential home for the elderly in Johannesburg, a group of around 30 pensioners pack the television room watching Queen Elizabeth’s funeral service.

The room at Pioneer House Care Centre is adorned with union flags, while a photo of Queen Elizabeth with South Africa’s former President Nelson Mandela is on the wall. As they wait for the service to begin, the residents have tea, scones and jam.

Afterwards I ask residents how they felt, and what Queen Elizabeth meant to them.

“The music was magnificent, the whole setup was beautiful,” Rose Green says. “We’ve always admired [the Queen] – she’s always been part of our lives. I was shocked when I heard she died.”

Mireille Spilg has dressed for the service in an elegant suit, adorned with a sparkling brooch.

“We were born on the same day. She was very, very special to me,” she says.

Asked what Queen Elizabeth meant to her, Marielle says: “She was full of fun. That’s why she was so very special.”

A little later, I speak with a woman who gives her name only as Deborah. She describes having been in London for Remembrance Day in 2005.

“We saw the palace, we saw everything and on Remembrance Day we were behind these lines and the Queen walked past – I could have touched her – I could never have believed it.”

British soldiers in Kenya have been reflecting on the Queen’s life and her deep connection to the forces.

Soldiers at Batuk gathered at their base to follow the funeral on television. Though thousands of miles away from home, they reflected on their Queen’s life of service and the end of an historic era, paying tribute to their departed Commander-in-Chief who they say “could empathise with service personnel”.

The unit’s commander, Col. Duncan Mann, spoke with pride of his Queen’s commission and of wearing medals that bear her image.

“She was omnipresent in our bases and insignia,” he said before dozens of troops and some of their family.

The Queen’s own family’s military service was something the soldiers connected with. Kenyan Sergeant Kennedy Mutonga told the BBC the Queen’s commitment and service inspired him to join the British military.

“She served everyone equally and with a smile,” he said. Honouring the Queen was “very special” to him.