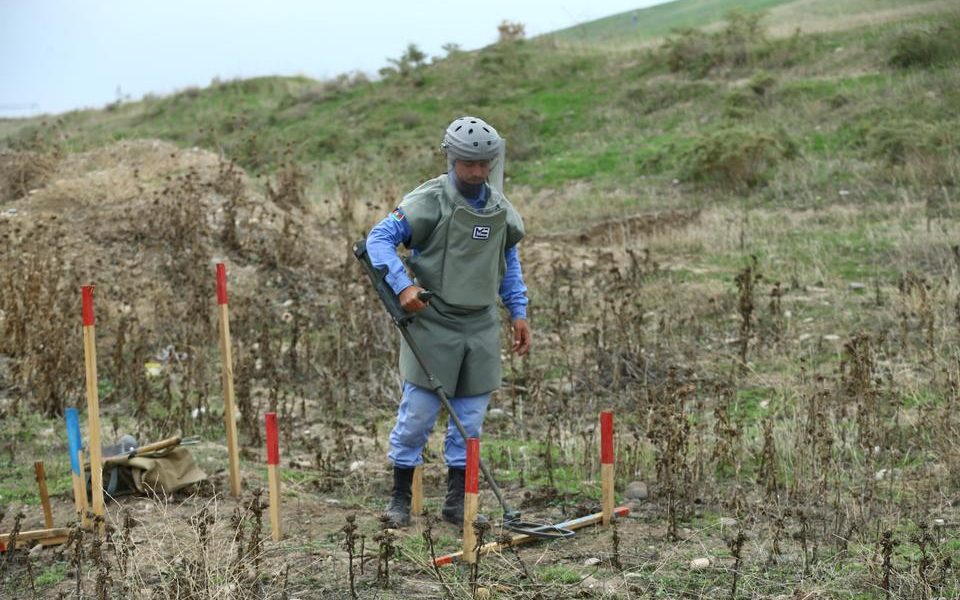 The liberation of Azerbaijani lands brought new realities to the South Caucasus. The post-conflict agenda ranges across pressing political issues such as the Armenia–Azerbaijan normalization process and the signing of the peace treaty between the erstwhile warring parties; border delimitation and demarcation; the opening of all communications in the region; and humanitarian issues – writes Dr. Esmira Jafarova of the Center of Analysis of International Relations, Baku, Azerbaijan.

It is reported that the liberated areas of Azerbaijan’s territories are among the most mine-contaminated in the world. In liberated Aghdam alone, which was described by many as the ‘Hiroshima of the Caucasus’ due to the massive destruction of the district by Armenia during the years of occupation, 97,000 landmines were reported to have been found. However, the problem with mine contamination in Azerbaijan’s liberated territories is not confined to its magnitude alone.

After persistent appeals by Azerbaijan, with the mediation of international actors such as the OSCE, the USA, the Russian Federation, the EU, and Georgia, and in exchange for Azerbaijan returning Armenian detainees, Armenia finally released minefield maps to Azerbaijan, despite previously denying their existence. Nonetheless, much to the chagrin of the Azerbaijani side, the accuracy of those minefield maps was found to be only 25%. Moreover, those maps certainly do not include the massive mining process conducted by some retreating units of the armed forces of Armenia, who have confessed to embarking on such activity near the Lachin and Kalbajar districts. Obviously, one cannot hope to have properly charted minefield maps in such instances of random and purposeful landmine contamination done in haste and for inflicting maximum damage.

The Azerbaijani National Agency for Mine Action (ANAMA) has projected that, despite the intensity of the work done by Azerbaijan, the clearance of some areas may take up to a decade. Demining work is very time- and resource-consuming, and Azerbaijan is bent on clearing the liberated areas as soon as possible. Assistance from the international community in this regard is welcome and highly necessary. Some countries have extended a helping hand; for example, the UK contributed over AZN 1 million (£500,000) to Azerbaijan’s recovery efforts and demining activities; France also announced a donation of €400,000 for mine clearance; and the United States Marshall Legacy Institute donated dozens of mine detection dogs to Azerbaijan. In May 2022, the EU announced an assistance package to Azerbaijan for demining purposes amounting to €2.5 million, which should be allocated through the United Nations Development Program (UNDP). Later, in July 2022, the EU declared that it would allocate an additional €4.25 million for demining work in Azerbaijan. Moreover, in early August 2022, France gave Azerbaijan 130 mine detectors to further extend support to demining activity in the liberated lands.

However, the burden and the associated dangers of the landmine contamination problem, unfortunately, lie entirely on Azerbaijan. Although specialists from Turkey are helping Azerbaijan in the physical clearance process, more assistance in this regard from the international community and relevant international organizations is certainly needed.

Reports suggest that, since the end of hostilities in the fall of 2020, over 240 military personnel and civilians have been killed or maimed as a result of mine explosions. On September 30, 2022, two people—Amid Asadov, born in 1986, and Cherkaz Guluzade, born in 2007—were killed in a landmine explosion in Azerbaijan’s Fuzuli region. In early October, three people were injured as a result of landmine explosions in Tartar region and on the territory of the liberated Tagaverd village of Khojavand region. The landmine threat in the liberated Azerbaijani territories is not subsiding and continues to claim innocent lives.

In the meantime, Azerbaijan keeps on unearthing more grisly details about landmine contamination in its liberated lands.  Recently, the Ministry of Defense of Azerbaijan reported that five Armenian-made PMN-Э anti-personnel mines were discovered by Azerbaijani engineer-fortification units in the direction of the Khojaly district of Azerbaijan, which were subsequently neutralized. Moreover, in 2021, after the war was over, more than 1,400 new landmines were planted in Lachin district alone, which unfortunately shows that the insidious war against Azerbaijan continues in the most gruesome way.

Armenia, for its part, could finally demonstrate its readiness for peace by providing more accurate minefield maps. As noted above, the accuracy of the minefield maps provided by Armenia is very low, and this country still needs to prove that it is on the right side of justice, international law and humanity by finally unearthing accurate and complete maps of the mined Azerbaijani territories.

Dr. Esmira Jafarova is a Board Member of the Center of Analysis of International Relations, Baku, Azerbaijan