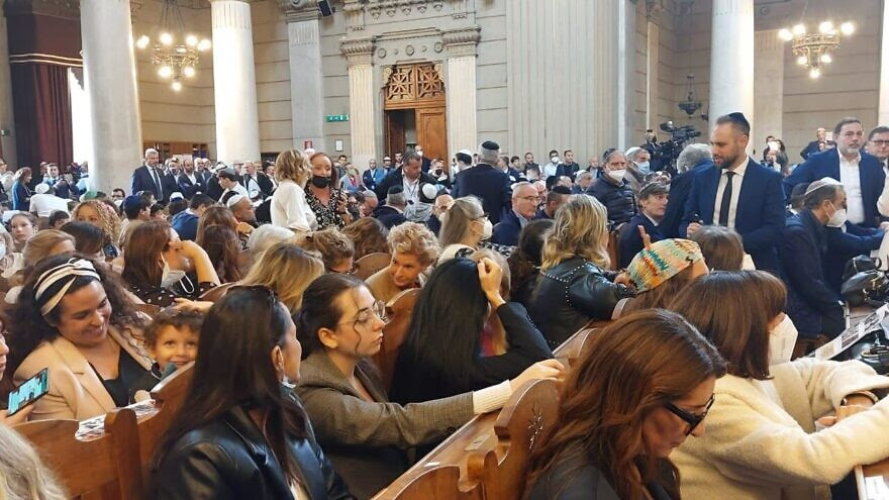 Sunday 9 October 2022 marks the 40th anniversary of the terrorist attack by the Palestinians on the Great Synagogue of Rome in 1982. In that attack, a 2-year-old boy, Stefano Tache was killed and 37 other people were injured. Stefano’s brother Gadiel was also injured in the attack. He has published The Shouting Silence his memoir in which he discusses the complicity of the Italian government with terrorists.

Italy should thank Gadiel, for his strength, determination, and telling his story of his pain and his family’s, particularly his brave mother Daniela, and his father Joseph. His story is personal and has universal appeal. It shows us that terrorist victims are subject to an emotional tsunami. They are still not fully aware of their psychological and physical pain and need to be addressed.

Israel has been the victim of a series of terror attacks and attempted terrorist attacks in recent months. Only victims can understand the trauma they have to endure, the pain in their families, and the physical wounds that remain. I witnessed Jerusalem’s streets literally covered in blood from over 1000 people during the second intifada. The aggressors were exonerated and made princes of the oppressed. However, the victims were exonerated and Israel and Jews were libeled as oppressors.

Gadiel Tache’s personal account of the terror attack and the horrendous political scandal that led to it sheds light on anti-Semitic terroristism and the suffering it causes. Gadiel explains in his book that anti-Semitic terror is just the latest historical manifestation of genocidal antisemitic violence which culminated with the Holocaust. Anti-Semitic terror uses media defamation and campus and social media hatred, as well as physical attacks on Jews all over the globe.

Terror is at its most extreme in Israel where anyone can be shot, knifed, or car-rammed. No family is complete without a friend or relative who has been the victim of terror. There is no place on the planet that hasn’t experienced anti-Semitic terror, including the 1972 Munich Olympics, Paris, Madrid and Toulouse, London, New York, New York, and many other American cities.

Although the global pandemic of terror, which culminated on 9/11, was never rightly described as being extremely anti-Semitic in its scope, terrorists continue to shout out their hatred of Jews as evidenced by the Rome attack, whose anniversary we solemnly observe. These incidents are in the thousands and are accompanied by demonizations of Israel and cries for “death to Jews” along with the declaration that “from the river, to the sea, Palestine will not be free.”

Anti-Semitic terrorist acts today with the same goal as in the past: to destroy the Jewish people. This is now to be achieved by the destruction the only Jewish state in all of the Middle East, as well as the only democracy there. The hatred towards Israel, which culminates in the destruction of the only Jewish state in the world, has reached frightening heights even within the Italian public opinion. It all started with Valentino Parlato’s article in which he said that Ariel Sharon was like Kesserling or Goering and ended with Lucio Lombardo Radice saying that Israel was planning to execute the Nazi liquidation in Beirut.

As Gadiel recounts in his book, Yasser Arafat was carrying a weapon and speaking to the Italian parliament. Even though Arafat claimed to be seeking peace, he was actually formulating the bloody strategy for the second intifada. This included the training of the shahid martyrs, and their sanctification.

As a journalist, I’ve met many terrorists over the course of my career. You realize how their training and upbringing have made them immovable and that their hatred has nothing to do territorial issues. It is ideologically and religious and makes the “martyr”, who murders Jews, a holy figure. They learn to reject, hate, and terrorize at home, school, and at summer camp. They boast that they love death as much they love life.

This translation is an original article from Shalom, an Italian Jewish publication.