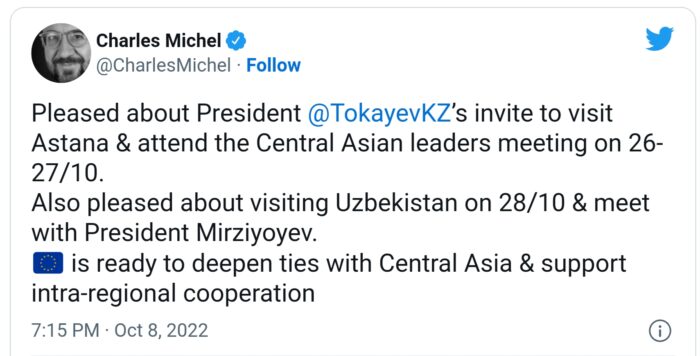 The President of the European Council Charles Michel is visiting Astana from 26 to 27 October to attend the Central Asian Leaders Meeting. This visit follows President Kassym Jomart Tokayev’s invitation. Michel confirmed this on Twitter (8 October).


He stated that the European Union (EU), is ready to strengthen ties with Central Asia, and support intra-regional collaboration.

Tokayev and Michel met on the sidelines the Global Food Security Summit, 21 September in New York. They discussed the prospects for strengthening the partnership between Kazakhstan, the EU and Europe. The focus was on trade and political dialogue. Tokayev invited Michel for a visit in Kazakhstan after the meeting.