Bangladesh Prime minister Sheikh Hasina today (17 Oct) reiterated her call for cooperation in growing more food and bringing every inch under cultivation to Bangladesh to prevent a global food shortage or crisis. This was against the backdrop the Russia-Ukraine conflict.


“I ask you again to stop wasting food and increase food production. Every inch of land should be under cultivation. Protect Bangladesh from possible food shortages and famine. She stated that she believes it is possible with all efforts.

The prime minister addressed a function to mark the World Food Day-2022, organised by the Agriculture Ministry at Osmani Memorial Auditorium.

She joined virtually the program from her Ganabhaban official residence here. She also stated that international organizations have predicted that the world will face famine in the coming days. 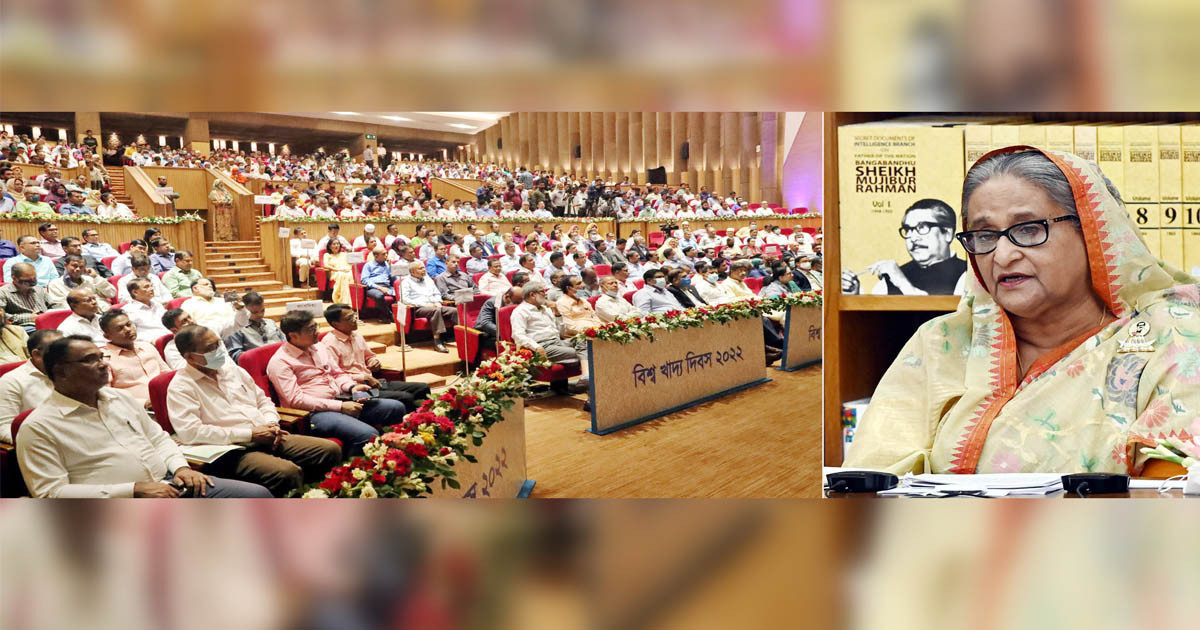 “We must all be vigilant from now on, as there is no food shortage in our country. There are many lands owned by the government and private companies. She said that you should cultivate all food grains, including fruits, vegetables and other crops, on every inch of land.

According to the prime minister, Bangladesh will not be in a food crisis if everyone pays attention to producing food. However, the world could be affected by the famine.

She stated that Bangladesh could offer food assistance to help the famine-stricken countries.

All were reminded by the premier that the Russia-Ukraine conflict has disrupted the global food supply chain and transport system, which is driving up food prices worldwide.

Sheikh Hasina stated that her government is working hard to end the dependence on imports of food such as edible oil and maize.

She stressed the importance of proper preservation of the food, especially perishable agriproducts, and the establishment food processing industries within the 100 special economic zones that have been established across the country.

The prime minister stated that Bangladesh once had to import onions, but now the country can grow it itself. He also said that they are focusing on being self-sufficient in producing edible oils.

She stated that her government’s top priority was to ensure food security and nutrition. A balanced diet can help to develop good health and sound minds necessary to create worthy citizens who will contribute greatly to the country’s overall development.

According to the premier, her government has prioritized research since she assumed power in 1996, following the footsteps of Father Of The Nation Bangabandhu Mujibur Rahman.

She said that Bangladesh was able to produce its own food after a shortage of 40 lakh tonnes of rice under the BNP-Jamaat alliance government.

She said that the Awami League government had brought 80,000 hectors of abandoned lands under cultivation.

She said that Bangladesh has flood, drought, and saline-tolerant paddy, as well as hundreds of improved quality seeds for various food grains, thanks to her research.

However, the prime minister criticized the BNP government’s current policy of beggaring to survive rather than making Bangladesh self-reliant in food. He pleaded for no foreign food aid.

She claimed that Bangabandhu had allotted Tk101 crore to the first budget of Tk500 million for independent Bangladesh. This was in accordance with the highest priority given to agriculture.

She continued that the Father of the Nation had also called to the second revolution to increase food productivity by automating the agricultural system. This would make Bangladesh a more developed and prosperous country, and give its people a better life.

Inspirated by Bangabandhu’s example, the prime minister stated that her government was working in six areas, including agriculture research and development and supply of agricultural inputs. She also expanded agriculture and made economical use of water. The prime minister also addressed the climate change effect, improving institutional capacity, and human resource development to ensure food security and nutrition security.

Sheikh Hasina stated that her government has taken many measures to ensure safe food for the countrymen, including establishing food testing laboratories and enacting laws.

She stated that her government has made digital technology available to the agriculture sector so farmers can access information through “Krishi batayan”, “Krishak Bondhu Telephone Seba (3331)”, Krishoker Jaala, Krishi Call Centre (16123), with the benefit of a Digital Bangladesh.

Prime Minister said that her government is working tirelessly to make Bangladesh a prosperous and developed country, just like Bangabandhu dedicated his whole life.

The function featured a video documentary about the World Food Day, and the government’s efforts to develop the agriculture sector.

As elsewhere around the globe, the World Food Day-2022 was observed in the country on Sunday.