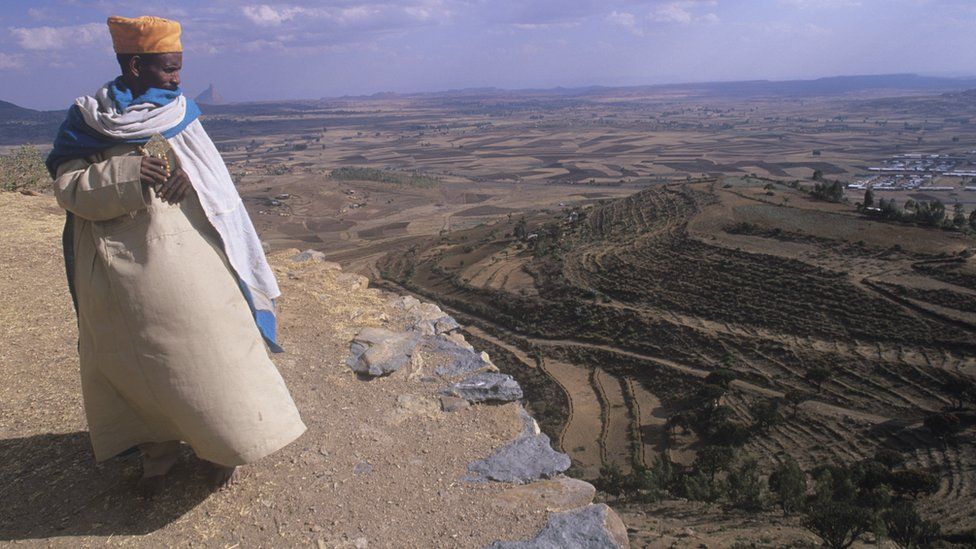 Hyenas scavenging on the corpses of villagers, cities and towns hit in air strikes, elderly men and young women conscripted into armies – these are the horrific accounts emerging from a war that has left tens, if not hundreds, of thousands dead in Ethiopia’s historic region of Tigray.

The region was once a tourist attraction, with visitors drawn to its rock-hewn churches, Muslim shrines and ancient scripts in the Ge’ez language.

Now Tigray is the site of a vicious war, as the Ethiopian and Eritrean armies on the one side, and the army of the Tigray People’s Liberation Front (TPLF) on the other, fight for control in a region that has long been seen as the key to power in Ethiopia – or what was historically part of Abyssinia.

It has been under a blockade for 17 months – with no banking, telephone or internet services – and no media access.

Over the last two years, the fortunes of the two sides have constantly changed on the battlefield, with:

“There are at least 500,000 Eritrean and Ethiopian federal troops in active combat, plus 200,000 from the Tigrayan side,” said Alex de Waal, the executive director of the US-based World Peace Foundation.

He added that after more than 50 days of non-stop fighting, this week the Tigrayan defence lines around Shire could no longer hold out because of a lack of ammunition.

“It’s a big setback for the Tigrayans. It leaves civilians exposed to massacre, rape and starvation,” Prof De Waal said, though the Ethiopian government has promised aid and the restoration of services in Shire and other areas under its control.

Shire reflects the humanitarian crisis in Tigray, with an aid worker saying that around 600,000 civilians were taking refuge in the city and its surrounding areas after earlier fleeing war-hit areas.

“More than 120,000 were out in the open, sleeping under trees and bushes,” he told the BBC, speaking on condition of anonymity for fear of reprisals.

Almost all humanitarian workers withdrew from Shire last week after it came under ferocious bombardment from Ethiopian forces.

Thousands of residents are also fleeing Shire amid fears that they could be subjected to atrocities – similar to those in other areas that fell under the control of Ethiopian and Eritrean troops.

“Four witnesses reported that in the village of Shimblina in September, 46 people were rounded up and summarily executed. Other villagers found their bodies lying mixed with domestic animals, which had also been killed,” the aid worker said.

What made the atrocity stand out, he said, was the fact that most of the victims came from the small Kunama ethnic group, which has not been involved in the conflict.

“Both sides are losing soldiers, and when they come into a village they take out their anger on locals,” the aid worker added.

Tigrayan forces faced similar accusations – including of rape, extra-judicial killings and looting – during their advances into Amhara and Afar, before being pushed back into Tigray. The region has a population of around seven million, a small number in a country with a population of more than 100 million.

Apart from atrocities, all the armies have been accused of forcibly recruiting civilians to fight, and of using the “human wave” tactic to gain ground.

“People are drafted into the armies and, after only a few weeks of training, they are sent in large numbers through mined areas towards the trenches of the enemy,” said UK-based Horn of Africa analyst Abdurahman Sayed.

“The enemy opens fire and kills many of them, but they keep coming in waves until the enemy runs of ammunition and they occupy their trenches.

“It is the old way of warfare. It was first used by the king of Abyssinia to defeat the Italian invaders in the 1890s. Despite their superior firepower, the Italians were overwhelmed by the sheer number of people who confronted them.”

Mr Abdurahman said that this tactic leads to massive casualties, with his estimate being that between 700,000 and 800,000 people have already lost their lives in almost two years of fighting.

“This is the most brutal war in the history of Ethiopia,” he added.

Though US-based Horn of Africa analyst Faisal Roble disputed that the Tigrayans used human wave attacks, his estimate of the death toll was not very different.

Mr Roble added that the Tigrayan army was well trained, with “the heart” to fight, but the Ethiopian army had two advantages: numbers and airpower.

“A general who is now an ambassador said they could enlist one million young men every year, and they have fighter jets and Turkish drones that have proved very effective. The Tigrayans have no air force.”

The command of the Ethiopian air force had moved to Eritrea’s capital Asmara, he explained, from where fighter jets were taking off as the city was much closer to Tigray than their usual base in Bishoftu in central Ethiopia.

“The drones are still leaving from Bishoftu,” Mr Roble said.

Eritrea intervened in the conflict as the TPLF is its sworn enemy. The TPLF dominated a coalition government in Ethiopia until current Prime Minister Abiy Ahmed rose to power in 2018. 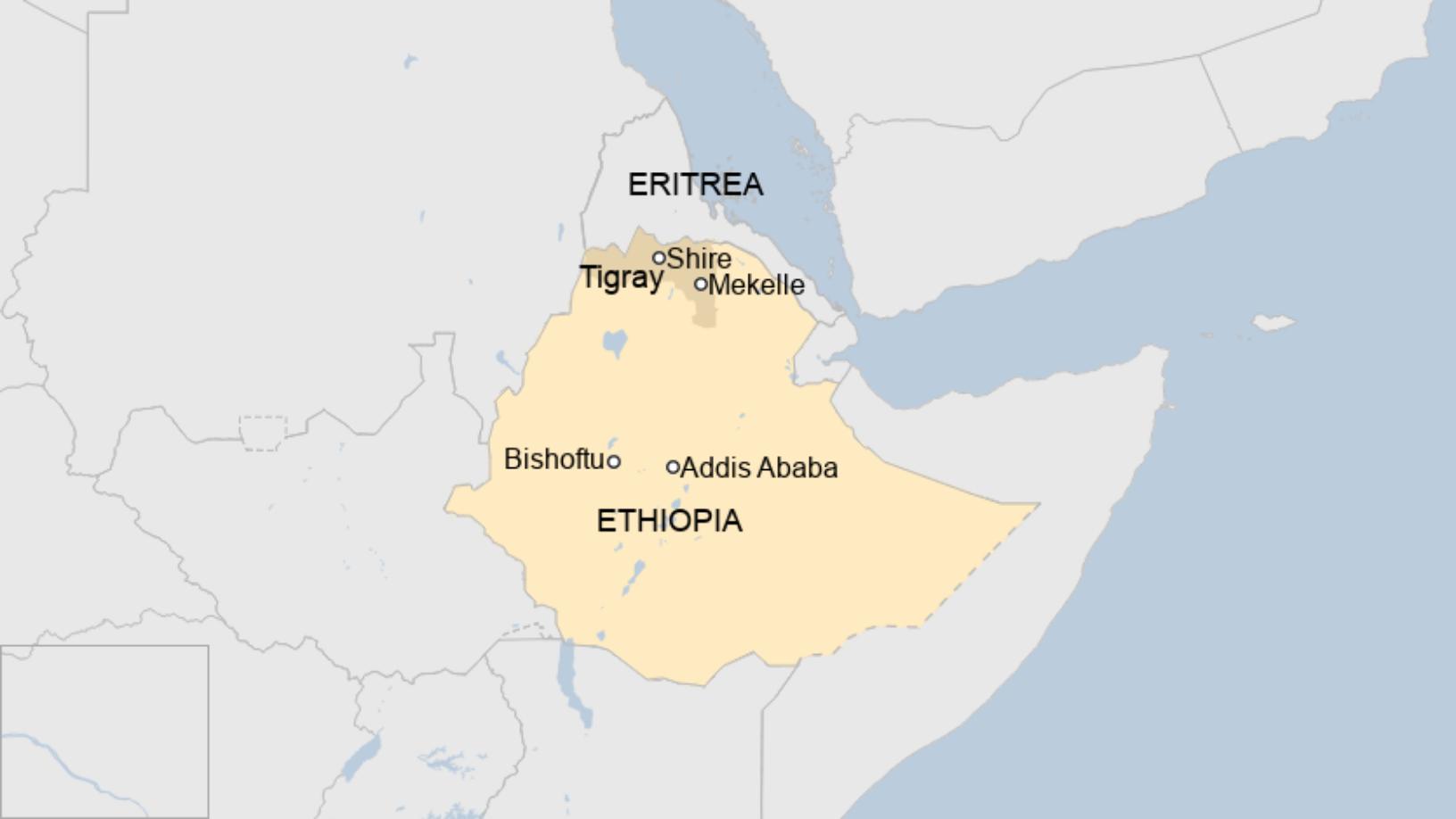 Under the TPLF, Ethiopia and Eritrea fought a border war which claimed the lives of about 80,000 people. An international tribunal later ruled that Ethiopia should hand over territory to Eritrea, but the TPLF-controlled government failed to do so.

Eritrea regained the territory soon after the latest war started in November 2020, and its critics say that President Isaias Afwerki is determined to help Mr Abiy finish off the TPLF so that it does not threaten his nation again.

“Eritrea’s concern is that the TPLF wants to either regain power in Ethiopia, or its wants a satellite government in Asmara that will give it access to the Red Sea because Tigray is a landlocked, impoverished region,” Mr Abdurahman said.

As the war in Tigray escalated in recent weeks, Eritrea’s government intensified its military mobilisation and hunted down draft dodgers across the country, multiple sources in Eritrea told the BBC.

In one instance in September, Eritrean troops raided a church in the southern town of Akrur, detaining a priest, young worshippers and choir members who had not heeded the military call-up, the sources said.

Prof De Waal said the call-up showed that Mr Isaias was “not taking any chances”, but he has not deployed conscripts to Tigray in large numbers.

“Eritrea has units in Tigray, but most of the fighting is being done by Ethiopian forces. What Isaias is doing is running the war because he believes he can show Abiy how to win, but the Tigrayans will fight, even if it means with knives and stones because it is a matter of life and death for them,” he said.

According to Mr Abdurahman, the war is being fought on four to six fronts, with tens of thousands of Ethiopian and Eritrean troops stationed near the Tigray town of Adigrat.

“They are ready to launch an attack on Adigrat, and Mekelle,” he said.

Sources on the battlefront told the BBC that the two armies were already advancing from Shire towards the historic city of Aksum, as well as Adwa and Adigrat, in an operation that has seen them move from west to east.

While foreign powers have been urging the two sides to resolve the conflict peacefully, Mr Abdurahman said this was unlikely to happen.

“Historically, the ruling classes of Abyssinia, and now Ethiopia, always fought their way to power. The powerful becomes the king of kings until someone else emerges. There is no tradition of resolving matters peacefully. It is a zero-sum game,” he said.

Prof De Waal said that the international community needed to act urgently to impose a ceasefire.

“Otherwise there is the risk of a genocide, and mass starvation,” he said, pointing to research in August from a Belgian-led academic team that calculated total civilian deaths during the war in Tigray – caused by the fighting, famine and lack of health care – stood at between 385,000 and 600,000.

“Harvesting is supposed to start now, but the Eritrean-led armies are turning Tigray into a wasteland.”