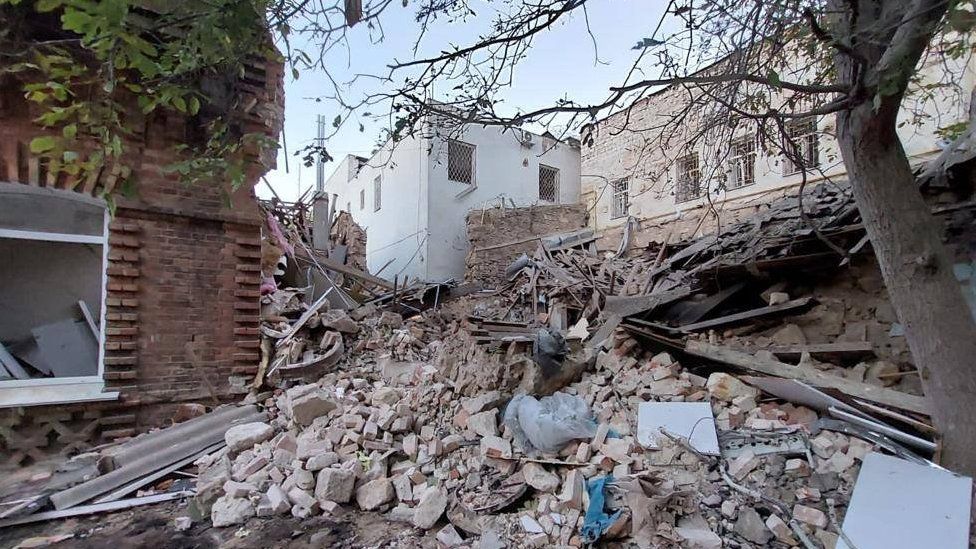 Russian forces have again targeted Ukraine’s energy facilities, with strikes on Kyiv and other major cities.

Presidential aide Kyrylo Tymoshenko said there had been three explosions in Kyiv, and BBC journalists saw plumes of smoke rising on the city’s left bank shortly after 09:00 (6:00 GMT).

Two facilities were seriously damaged in the central city of Dnipro and power cuts were reported in Zhytomyr.

The latest attacks came 24 hours after Kyiv was hit by “kamikaze” drones.

The unmanned drones, believed to be Iranian-made, killed at least eight people in the capital and the northern city of Sumy, and struck critical infrastructure, with power outages reported in hundreds of towns and villages.

President Volodymyr Zelensky responded by saying that Russia’s occupiers were continuing to do “what they do best – terrorise and kill civilians”.

It was not initially clear whether drones were involved in Tuesday’s attacks, although Mr Tymoshenko, deputy head of the presidential office, said an S-300 anti-aircraft missile was fired at a residential building in the southern city of Mykolaiv overnight, killing one person. The city’s flower market was also destroyed. In other attacks early on Tuesday:

Earlier, the US said it agreed with its French and UK allies that the supply of drones by Iran violated a UN Security Council resolution linked to a nuclear agreement, barring the transfer of certain military technology.

Ukraine has identified the drones used in deadly attacks on Kyiv and Sumy as Shahed-136 unmanned aerial vehicles (UAVs). Vedant Patel of the US state department said the US would not hesitate to use sanctions.

The EU said it was also gathering evidence and was ready to act.

Meanwhile, in one of the biggest prisoner swaps since Russia’s war began in February, 218 detainees were exchanged – including 108 Ukrainian women.