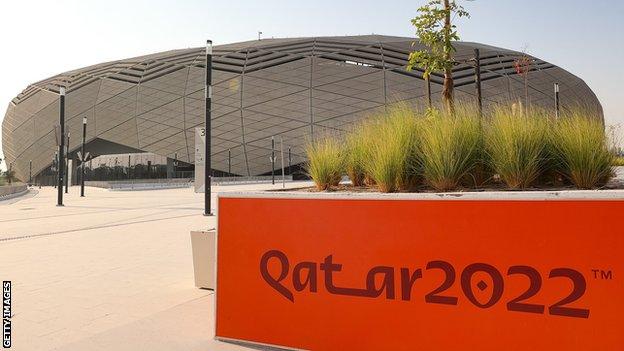 The task of protecting migrant workers from exploitation in World Cup hosts Qatar is “only half done”, says human rights group Amnesty.

With one month until kick-off, the organisation warned that progress on labour reforms “must not grind to a halt once the roadshow leaves Doha”.

And in its final pre-tournament report, Amnesty reiterated its call on football’s world governing body Fifa to establish a compensation fund for abused migrant labourers.

It also said the Football Association “should have spoken out far more clearly and honestly about the serious human rights abuses that threaten to completely overshadow this World Cup”.

Both Fifa and the local organising committee have hailed the reforms that have been introduced.

The FA meanwhile insisted it had “clearly outlined our position on Qatar”.

In its report Amnesty recognises that an overhaul of Qatar’s labour system has led to improvements in conditions for the two million migrant workers in the country. But it said a failure to fully enforce or implement these changes was undermining progress.

It claimed thousands of workers are still being denied wages and rest days, being exposed to unsafe working conditions, and faced barriers to changing jobs.

It said the deaths of thousands of migrant workers over the past decade on World Cup-related projects and wider infrastructure remain unexplained.external-link

“Although Qatar has made important strides on labour rights over the past five years, it’s abundantly clear that there is a great distance still to go,” Amnesty International’s head of economic and social justice, Steve Cockburn, said.

He added that, despite pressure from Amnesty and a working group from European governing body Uefa to establish a migrant workers’ centre and compensation scheme, “Qatar and Fifa are still not budging”.

Amnesty has said a compensation fund should be worth at least £350m – equal to the amount due to be awarded in prize money at the event.

What have Fifa and Qatar said?

In response, Fifa said: “A wide range of measures have been implemented over the past years to improve protections for workers in Qatar, and these developments have come about largely as a consequence of the World Cup being played in the country.

“Workers have been compensated in various forms where companies failed to uphold the Workers’ Welfare Standards of the Supreme Committee for Delivery & Legacy.

“Fifa remains in positive ongoing dialogue with all relevant authorities in Qatar over initiatives that will benefit migrant workers in Qatar long after the final game of the World Cup. Further information will be provided in due course.”

A spokesperson for Qatar’s government said: “Qatar is incredibly proud of the labour reforms it has introduced. Few countries have come so far so quickly, and Qatar now leads the region on labour rights.

“Amnesty fails to acknowledge that our labour system is constantly improving, and that year-on-year the number of company offences has declined as enforcement measures take hold and compliance increases.

“Our commitment to labour reform will not end after the World Cup. Qatar is in this for the long haul and we are determined to make labour reform an integral part of our World Cup legacy.”

This week, US Soccer became the latest federation to back the idea of a worker compensation fund.

Fifa deputy secretary general Alasdair Bell also told a Council of Europe session on labour rights in Qatar that compensation is “certainly something that we’re interested in progressing”.

The Supreme Committee for Delivery & Legacy (SC) said: “The advancements in workers’ welfare is a legacy we are very proud of, and one that we are already seeing in action.

“We have always believed that the World Cup will be a catalyst to accelerate positive initiatives, leaving a legacy of meaningful and sustainable progress for the country and region.

“Our Workers’ Welfare Standards have ensured decent working and living conditions for workers, and also paved the way for groundbreaking initiatives such as the recruitment fees reimbursement programme, grievance mechanisms, as well as enhanced healthcare through the launch of comprehensive medical screenings, cooling work wear and dedicated mental and cardiac pathways – many of which have already impacted workers beyond the SC’s scope.

“Work is ongoing and there is of course still room for improvement. We are continuing to explore alongside key partners the opportunities to enhance the legacy that improves the lives of workers and lays the foundation for fair, sustainable and lasting reforms.”

Amnesty also said it has “repeatedly expressed concern that the FA has been reluctant to make public statements concerning human rights issues in the lead-up to Qatar 2022”.

Sacha Deshmukh, Amnesty International UK’s chief executive, said: “With kick-off now almost upon us, the FA has a responsibility to say loudly and clearly that Qatar’s labour reforms urgently need reinforcing, that a Fifa-backed worker compensation fund needs to become a reality, and that Qatar must go beyond merely saying LGBTI fans are ‘welcome’ and instead abolish the country’s shocking anti-LGBTI laws.”

An FA spokesperson said: “We’ve said publicly that we support the concept of a migrant workers centre, and for compensation for families of workers who have been killed or injured during the construction process.

“We intend to wear an armband during the tournament – and for the whole season – expressing our support for inclusion in football. And last week, along with our colleagues in the Uefa working group, we called on Fifa to commit to the outstanding issues regarding migrant workers by the end of this month.”