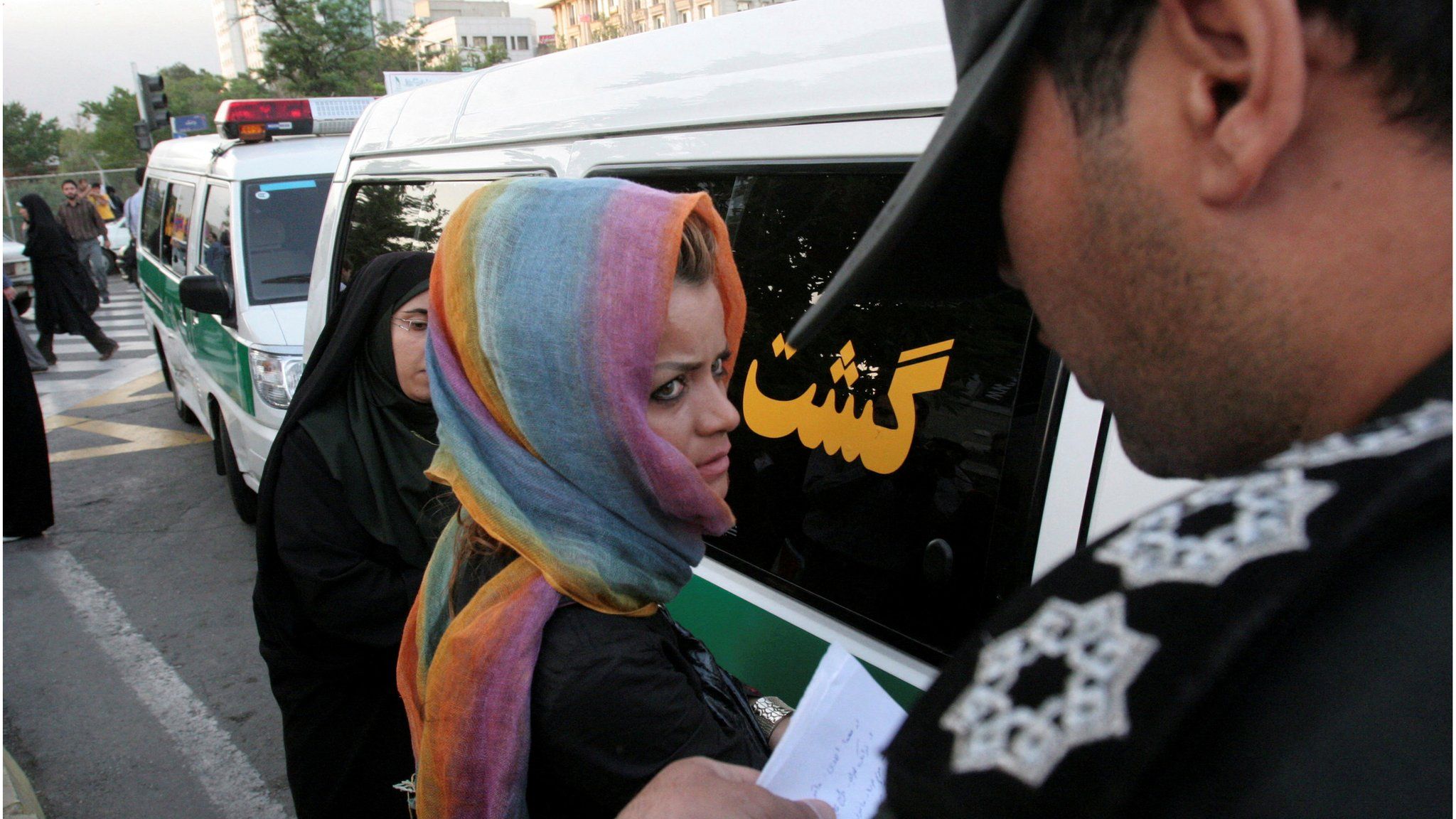 Western powers have tightened the screws on several Iranian institutions as protests continue to sweep the country. They include the feared morality police, which has become the focus of attention after 22-year-old Kurdish Iranian Mahsa Amini died in its custody, triggering the outpouring of anger.

What are the morality police?

The morality police, formally known as Gasht-e Ershad (Guidance Patrols), is part of the national police force tasked with ensuring compliance with Iran’s Islamic values, including dress code. It’s unclear how many men and women work for the force, but they have access to arms and detention centres, as well as what are called “re-education centres”.

Women can be stopped by the morality police if they are considered to be “improperly” wearing hijab, or headscarf, and taken into custody.

Inside the “re-education centres”, detainees are given classes on the importance of the hijab, and then forced to sign a pledge to abide by the state’s clothing regulations before they are released. Many women resist detention and, as a result, are arrested by force.

The arrest of Mahsa Amini in Tehran on 13 September (she died three days later in a coma) for allegedly violating the hijab rules is the most recent case. There were reports that officers beat her head with a baton and banged her head against one of their vehicles while detaining her. However, authorities blamed her death on an underlying health condition – something her family denied.

What will be the impact of sanctions?

The sanctions are likely to be most effective against those thinking of joining the morality police. Some join the force not out of ideological reasons but to makes ends meet. Others do not join voluntarily but to serve mandatory military service.

To impose a travel ban on these foot soldiers might impact the morality police’s recruitment campaigns in a negative way.

However, the joint efforts of the Western countries to sanction Iran’s institutions such as the morality police, Evin prison or Basij forces are unlikely to change the regime’s behaviour.

Some activists and social media users want to focus the sanctions on the relatives and children of official figures who live outside Iran. Others want more targeted political measures to put pressure on Iran to stop the killing or detention of more people.

One, Hamed Esmailion, is the spokesperson for families of victims of the Ukrainian passenger plane that was shot down by Iranian forces over Tehran two years ago (in what Iran said was an accident).

He is the figure behind the call for the huge rally that took place in Berlin last week. It is believed to have been the biggest so far held by the Iranian diaspora.

Mr Esmailion has now called on leaders of the G7 group of the world’s most advanced economies to expel Iran’s diplomats, and has gathered around 700,000 signatures in support of a petition.

Many people believe the toughest sanctions on individuals known to be responsible for human right abuse in Iran will render pointless because most of the officials listed are unlikely to have any assets to be frozen in the US, Canada or Europe.

Who is suppressing the protests?

During the past five weeks, thousands of Iranians have protested against the clerical establishment in over 100 cities. Videos on social media show a crackdown by security forces that has included the use of live fire, beatings and sexual assaults.

The Oslo-based Iran Human Rights group has said at least 234 people, including 29 children, have been killed. The true figure is believed to be much higher. Iran’s Human Rights Activists News Agency (HRANA) estimates that 13,309 people have been detained, many of them young people and children.

A lack of clarity about exactly which forces are taking part in the brutal repression has made it difficult for Western sanctions to target those involved in the human rights violations.

However, different branches of Iran’s police, including Naja Special Forces Unit and what is called Nopo (Guardians of the Islamic Jurist Special Forces); different groups in Islamic Revolutionary Guard Corps (IRGC) such as members of the paramilitary Basij Resistance Force; and plainclothes agents are part of the security apparatus on the ground, having been seen in videos posted on social media.

Some activists – especially those outside Iran – want Western countries to go beyond making public messages of support and introducing new sanctions.

And it seems that this will not happen until or unless Iran is closer to a tipping point where the regime becomes quite dysfunctional, or its security forces are being undermined. Foreign governments would also look for signs of an opposition leadership leadership figure to emerge.

At this point, it doesn’t seem that Western countries are prepared to cut diplomatic ties with Iran. US Democrats last week – concerned it could impact on nuclear talks with Iran – did not support a bill introduced by Republicans to sanction Iran’s Supreme Leader, Ali Khamenei and its president, Ebrahim Raisi.

Who or what has been sanctioned?

The UK Foreign, Commonwealth and Development Office (FCDO) said sanctions were being slapped on the chief of the morality police, Mohammad Rostami Cheshmeh Gachi, and the head of its Tehran Division, Haj Ahmad Mirzaei, in response to Mahsa Amini’s death.

The EU said it was imposing sanctions on 11 people and three other organisations besides the morality police. Two morality police key figures, Mohammad Rostami and Hajahmad Mirzaei, are among the 11 sanctioned.

In addition, the EU sanctioned the Iranian Law Enforcement Forces (LEF) as well as a number of its local commanders for their role in the repression.

Moreover, the EU introduced sanctions against Issa Zarepour, the Iranian Minister of information and Communications Technology, for severely disrupting the internet and hampering the ability of protesters to post on social media.

Canadian sanctions cover institutions such as the Guardian Council and Assembly of Experts as well as thousands of IRGC members who will be barred from entering the country.

It has also sanctioned many officials, including the former Iranian Foreign Minister Mohammad Javad Zarif; Amir Hatami, an army general and former defence minister; and Saeed Mortazavi, an Iranian prosecutor who Canada says ordered the torture of Canadian Iranian journalist Zahra Kazemi. Kazemi died as a result of her mistreatment while in custody in 2003.

The US treasury department has sanctioned seven senior leaders of Iran’s security organisations, including the morality police; the ministry of intelligence and security; the army’s ground forces; the Basij; and the LEF.

In response, Iran has issued its own sanctions against several British organisations and individuals for their alleged “incitement of riots” and “support of terrorism”.

The Iranian sanctions include a ban on and the granting of visas and entry into Iran, as well as the seizure of designated individuals’ assets there. Those targeted include the British government’s Communications Headquarters GCHQ; BBC Persian; Iran International TV; and the UK’s Minister of State for Security, Tom Tugendhat.