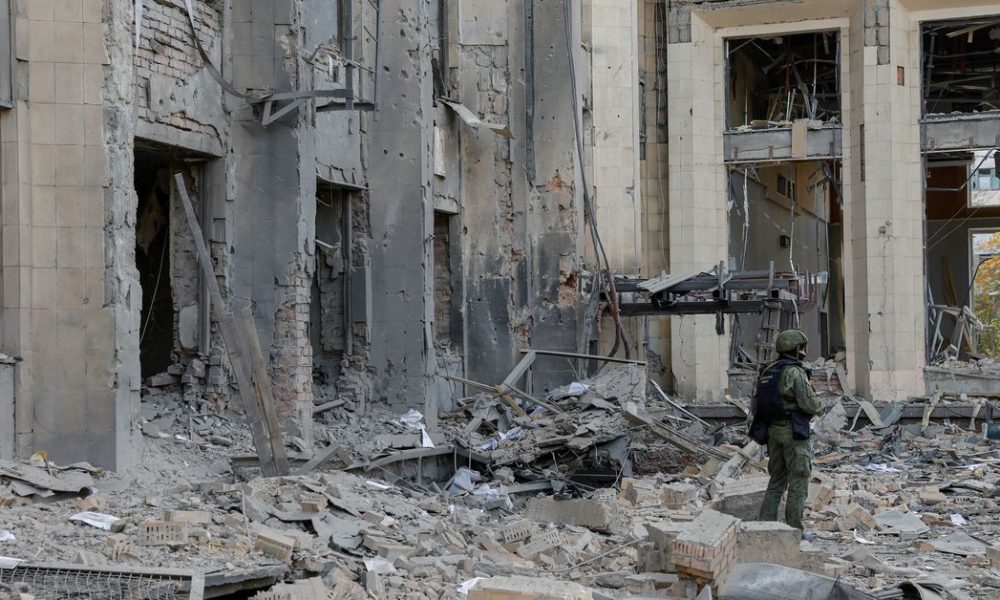 Russian President Vladimir Putin announced that he would establish martial law in four Russian-occupied regions of Ukraine. These areas were claimed by Moscow last month, but the Russian government is struggling to defend them against Ukrainian advances.


Putin addressed his Security Council members via televised remarks. He ordered the creation of a special coordination committee under Prime Minister Mikhail Mishustin to help boost the faltering war effort.

He said that Russia’s “special Military Operation” must be supported by the whole system of state administration and not just the security agents.

This was almost eight months into war and marked Putin’s latest escalation in his fight against the series of major defeats that have occurred since September.

The US State Department stated that Russia was using “desperate techniques”. According to a Kyiv official it would not change any of the above.

A Kremlin publication directed “economic mobilization” of eight areas bordering Ukraine, including Crimea, which Russia invaded in 2014 and annexed.

They were put in a special regime, one step below martial law. It allowed movement restrictions.

However, it was unclear how effective and fast these new measures would increase Russia’s military presence in the region. Russian-installed officials in Ukraine’s occupied Kherson issued these new measures, and advised civilians to leave certain areas as quickly as possible to avoid being attacked by Ukraine.

Russia expert Mark Galeotti said on Twitter that the moves were “a declaration of variegated Martial Law throughout the entire of Russia”, with some emergency regulations now in place across the whole country.

He said that it wasn’t clear whether these additional powers would be used by the regional officials as Moscow requested.

Russian news agencies reported that Vladimir Saldo, the Russian-installed acting governor of Occupated Kherson, confirmed that he would hand power over to the military. Many regional chiefs, including Moscow’s mayor Sergei Sobyanin said they don’t intend to make any changes right away.

Mykhailo Podolyak was the Ukrainian presidential advisor and stated via Twitter that “this doesn’t change anything about Ukraine:We continue to liberate & de-occupy our territory.”

Putin has taken a number of extreme steps over the past month in response to Ukraine’s gains. The unpopular calls up of hundreds of thousand of additional troops, and the unilateral annexed by Ukraine of four areas are just two of the many. The U.N. General Assembly condemned this as illegal and threatened to use nuclear weapons to defend Russia’s lands.

Many ordinary Russians now see the war in its entirety, despite months of Kremlin assurances.

Putin and his allies have harshly criticised the military’s failures as well as the chaotic state of mobilisation. This has resulted in hundreds of thousands fleeing to other countries.

Putin implicitly admits that some regions resort to public appeals to get basic equipment for soldiers who are newly mobilized to go to war.

Soldiers must always have all the tools they need, no matter what task. This includes equipment for barracks, places soldiers are deployed, living conditions and food, as well as medical care.

“We have every opportunity to solve all of the problems here – they exist at a modern, worthy level for our country.”

Paul Stronski, of the Carnegie Endowment for International Peace, is a Russia expert. He stated that Putin was putting more responsibility on regional leaders by ordering them into war without explaining what they should do.

Stronski, an ex Russia specialist at the US State Department stated that the orders of the president exemplified Moscow’s efforts to implement successful war plans.

He stated that Putin had a vision seven year ago. He said, “It’s gone horribly terribly wrong, and he still does not know how to fix it.”

Chief writer for Russia, CIS. Reporter for 7 continents reporting from more than 40 countries. London, Wellington, and Brussels were some of the places that I worked. Reporting on the fall of the Soviet Union in the 1990s. Security correspondent, 2003-2008