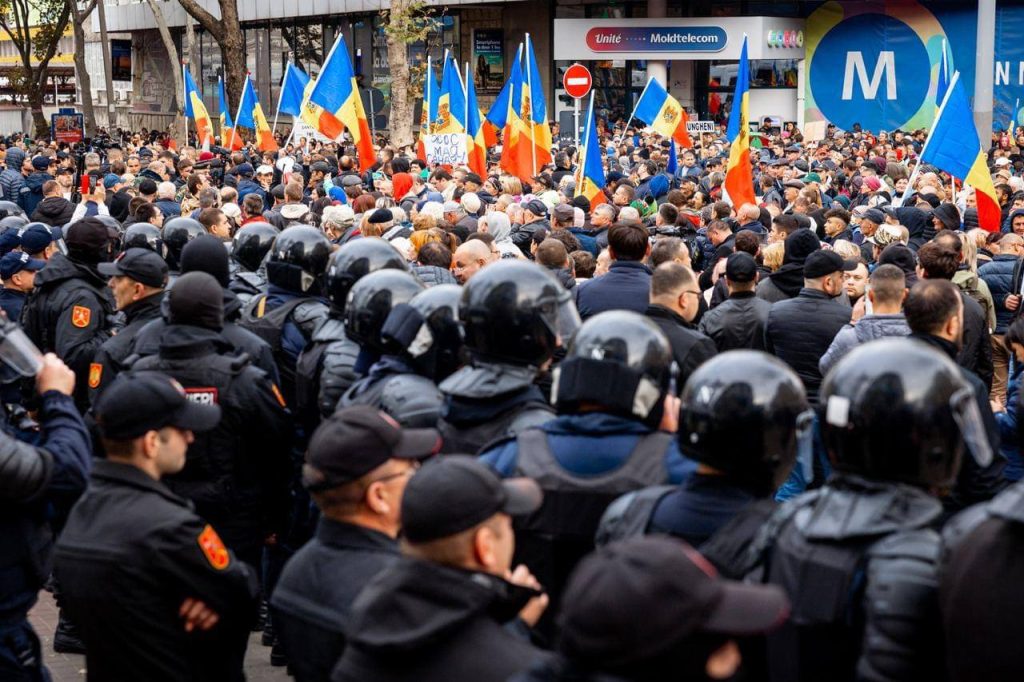 The Republic of Moldova is Europe’s poorest country. For the eighth consecutive week, widespread protests against the government are taking place in the capital of Moldova. They demand that President Maia Sandu and the PAS government resign. They accuse the government for a string of incompetent and abusive decisions.

The “SHOR” party is the party that has been the most prominent opposition to the current Moldavian regime. The party’s electoral score has tripled since the last parliamentary election, when it won six seats in parliament, making it the second most popular party within the country.

The protests reached boiling point three weeks ago when police and special forces brutally stormed protestors and forced them to flee hundreds of tents they had set up in front of Chisinau’s Parliament and Presidency buildings.

After tightening legislation regarding protests, the Commission for Exceptional Situations granted police additional rights to disperse demonstrators. Protest organizers strongly criticized the decision, saying that it was a violation of fundamental human rights and a breach of democratic principles by the PAS government. Reps from the “SHOR” Party charged the PAS government with turning itself into a dictatorial regime, and using the Interior Ministry and ISS as a weapon against protesters.

A number of international human rights organizations in Moldova shared the concern expressed by the “SHOR” Party. They condemned the police use of force against protesters and denounced the forced evictions of protesters’ tents. These organisations include Amnesty International Moldova and several other well-respected NGOs like the Centre for Policy and Reform and Promo-LEX Association. The People’s Advocate of Moldova also condemned PAS abuses.

The unprecedented pressure being applied by the ruling party to Mr. Ilan SHOR, president of the most active Moldavian opposition group, is growing. This has led to new sanctions and more disputed judicial measures. The personal appeals of Mrs. Maia Sandu, and other key members from the ruling PAS party to the judges and prosecutors to “finalise” the cases against Mr. Shor are to be noted. They seem to indicate that the current Moldavian government is more concerned with expedited justice than proper justice.

He is not the only one who supports unjustified political pressure. In the past few months, around 30 anti-government protest leaders were detained and taken into custody. One of the most active members of “SHOR” Party, Mrs. Marina Tauber (Vice-President and Member of the Moldavian Parlament), was detained in July on charges related to illegal party funding. Solidaritatsnetz International, which is a member the prestigious Swiss group Solidarity Network, described her arrest and imprisonment as an abuse by the Moldavian government. According to the organisation, Mrs. Tauber was a political prisoner because her imprisonment had violated at least two international human right conventions. These are Article 19 (United Nations), and Article 5 (Rome Convention).

Despite the fact that people’s discontent grew to alarming levels due to the growing crisis and rising prices (which have, for some goods exceeded hundreds of percentage), during the seven-weeks of protests, both representatives of the ruling PAS and Mrs. Maia Sandu have refused to discuss the demands of the protesters. They deemed such demands unfounded and suggested that protesters work rather than protest. To gain less, and to face ever-growing inflation, go to work. One may return to poverty.

These accusations are made by the president at a time in which gas prices have risen sevenfold since her party was in power. Electricity prices have tripled, fuel prices have doubled, and inflation has reached 35%, the highest level in Europe and higher than in war-torn Ukraine.

Protests are likely to continue under current circumstances. Because of the current energy crises in Moldova, which is also facing unprecedented energy crises, Moldova risks running out electricity and/or gas during the winter. Gazprom and Ukraine have a gas supply agreement. This has resulted in a significant reduction of the gas being sent to Chisinau.

Is Moldova able to find a way out from this crisis through a peaceful and democratic power transition? If yes, when will it be possible to redress economic and political imbalances and to pacify both socially and politically?