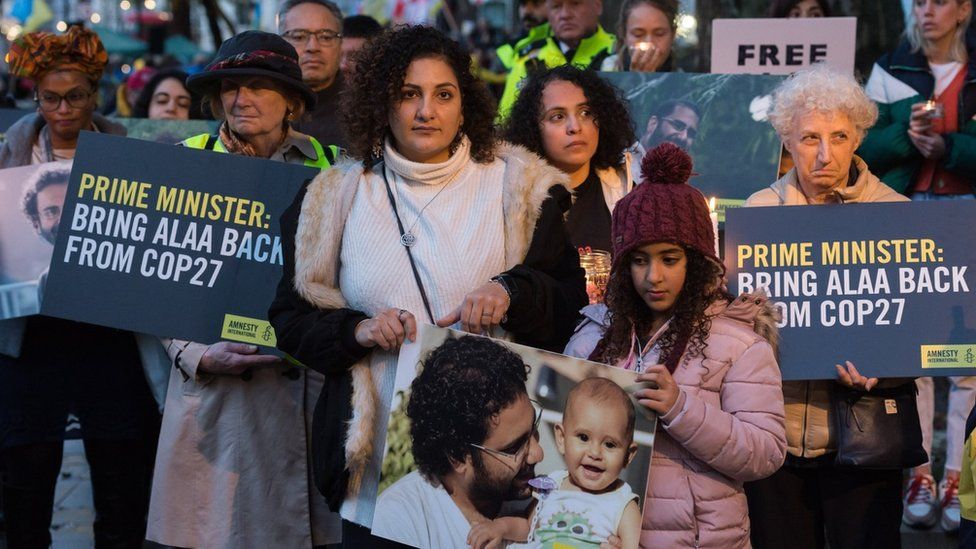 At a vigil outside Downing Street in central London, pleas to “Free Alaa” sounded increasingly desperate on Sunday, as jailed activist Alaa Abdel Fattah intensified his hunger strike in Egypt.

For six months, the British-Egyptian dual citizen has restricted his food intake to just 100 calories a day. Now, he is said to have stopped eating and drinking entirely, meaning he could soon die.

As world leaders, including the UK’s Rishi Sunak, meet in Sharm el-Sheikh for the COP27 climate summit, human rights groups are highlighting the plight of an estimated 60,000 political prisoners in Egypt.

They include many people I met and interviewed during the years I spent as a Cairo correspondent, before and after the 2011 uprising that overthrew President Hosni Mubarak.

Egypt has seen its worst crackdown on dissent in decades under authoritarian President Abdul Fattah al-Sisi, who came to power in a 2013 military takeover.

“They’ve arrested tens of thousands of people, including journalists, human rights defenders, activists, protesters, artists, football fans, politicians – even very unlucky bystanders because some policemen suspected them of being Muslim Brotherhood members or critical of the authorities,” says Hussein Baoumi, Egypt researcher for Amnesty International, who now lives outside the country.

Many are detained without trial and languish in dire conditions with little or no medical care. Torture is commonplace. It is said that several hundred have died in jail.

‘Alaa has been persecuted’

I remember Alaa, who is now 40, as a young, curly-haired protester on a roundabout in the centre of Cairo’s iconic Tahrir Square in 2011, with other bloggers and IT experts.

Raised in a family of activists, Alaa had already spent time behind bars for demanding democratic reforms during the era of long-time President Mubarak.

He was targeted by the country’s interim military rulers after Mubarak was overthrown, then by the government of his elected successor, Muslim Brotherhood leader Mohammed Morsi, and next by Mr Sisi’s government. He has spent eight of the past 10 years in jail.

Alaa is currently serving a five-year sentence for “spreading false news” in social media posts. His sister, Mona Seif, has said his family is “terrified” he will die in prison.

“This is somebody who’s been persecuted and he’s used up all his patience,” his tearful aunt, the novelist and political commentator Ahdaf Souief, told the BBC. “And none of us have any reason to believe that the regime in Egypt will ever, ever let him go.”

Alaa became a British citizen last year. British consular officials are said to be pressing for urgent access to him.

A UK Foreign Office spokesperson told me: “The prime minister intends to push for progress when he visits Egypt for COP27.”

Speaking out about human rights in Egypt was always risky, but recently the government’s red lines have moved dramatically.

The few human rights activists I know who have not been silenced, moved overseas or imprisoned, live precariously.

“What we have now is a full-scale republic of fear, where rights that used to be limited under Mubarak have become criminalised under Sisi, especially when it comes to freedom of expression, assembly or association,” says Hossam Bahgat, the internationally respected founder of the Egyptian Initiative for Personal Rights (EIPR), whom I first met 15 years ago.

Three senior figures in the EIPR were arrested two years ago and released on bail after international pressure. They continue to fight terrorism-related charges. One researcher remains in pre-trial detention.

Hossam has himself been convicted of “spreading false news” and “insulting a government authority” and fined. He has also had his assets frozen and has been banned from travelling outside of Egypt since 2016, in connection with a separate criminal case.

“The justice system has become completely co-opted so that it is part of the security apparatus and even our limited civic space has been completely eviscerated by Sisi,” he says. “There are no opposition newspapers, no public protests, no political opposition, members of parliament. It’s just all gone.”

The results can sometimes seem farcical.

One of the many lawyers behind bars is Mohamed al-Baker, who was arrested in 2019 when he went to meet state security prosecutors to defend Alaa Abdel Fattah. He was convicted on similar charges to his client and remains in jail.

Egyptian authorities have suggested that some politically motivated arrests were needed to restore stability after the turmoil of the Arab Spring.

One of their biggest round-ups was of members of the Muslim Brotherhood after their 2013 sit-ins in Cairo to oppose the ousting of Mohamed Morsi. The protests were brutally broken up and more than 1,000 people were reportedly killed.

The Brotherhood was later designated a terrorist group. Morsi died as a prisoner in mid-2019, after dramatically collapsing in a Cairo courtroom while standing trial.

Islamists of all stripes are now behind bars. Perhaps the most high-profile is Abdul Moneim Aboul Fotouh, a relative liberal who left the Brotherhood and was once a popular presidential candidate.

During COP27, activists see the chance to raise his case as well as those of others.

They include the blogger and journalist, Mohammed “Oxygen” Ibrahim; human rights lawyer Hoda Abdelmoniem; and two would-be politicians from the short-lived “Hope Coalition” who had hoped to run in the 2020 elections, Hisham Fouad and Zyad el-Elaimy – jailed after speaking to the BBC.

The government has promised to start a dialogue with opposition parties and freed some 800 political prisoners this year. However, rights groups say nearly double that number have been arrested since April.

Detentions increased after some Egyptians called for protests on 11 November. The authorities have also struggled to deal with the arrival of international demonstrators.

Last week, Indian climate activist Ajit Rajagopal was trying to walk from Cairo to Sharm el-Sheikh when he and then his Egyptian lawyer were arrested. Both were later released.

Despite his government’s human rights record, President Sisi has good relations with Western countries, which see Egypt as an important Arab ally, key to regional stability.

Alaa’s family and supporters are waiting to see if global leaders will now raise their voices.

“Alaa is really putting his life on the line,” says Amnesty’s Hussein Baoumi. “The minimum that world leaders can do is to reiterate the message that he and millions of us Egyptians are dreaming of – just to be able to live freely and safely.”