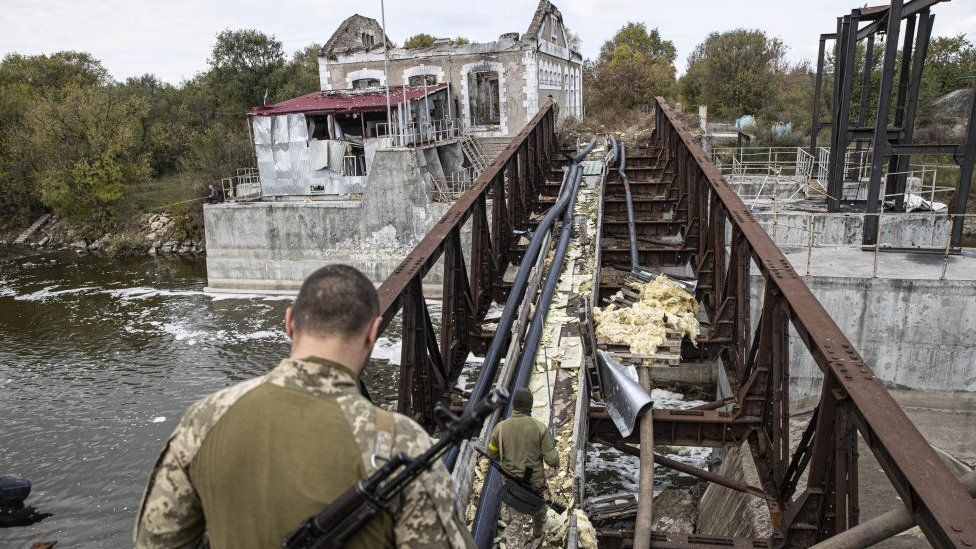 Both sides see the city, in the south of the country, as important to control. However, military experts say a battle for it could prove very costly.

Where is Kherson and why does its location matter?

It is on the banks of the Dnipro river, near the Black Sea coast.

It is also close to the Crimean peninsula – a part of Ukraine which Russia annexed in 2014 and which contains a number of its military bases.

“Kherson is a gateway to Crimea,” says Marina Miron, researcher in defence studies at Kings College London. “Recapturing it would pave the way to reconquering Crimea, which Ukraine aims to do in this war.”

Kherson’s location is also important, says Forbes Mackenzie, a former British Army intelligence officer and chief executive of Mackenzie Intelligence Services. “Getting control of the Dnipro river is important because it runs right into the centre of Ukraine,” he says.

What is Kherson’s symbolic importance?

Kherson is the only one of Ukraine’s regional capitals to have fallen to Russian forces.

Russia took it in early March and recently declared it had annexed the Kherson region, along with three other regions in Ukraine.

Recapturing the city would send a message that the war is turning in Ukraine’s favour, says Ms Miron.

“It would demonstrate to the West that it is still worthwhile spending money on supporting Ukraine and supplying them with weapons.”

However, Russia’s forces are also under huge pressure to defend Kherson. They lost 6,000sq km (2,317sq miles) of territory to Ukrainian forces during their counteroffensive in the east of the country.

“Russia needs a win,” says Ms Miron. “It needs to show it can fight back”.

How soon could a battle for Kherson start?

Ukrainian forces have bombarded bridges across the Dnipro with missiles, to try and cut Russia’s supply lines to the city from the east and south.

Its forces have also been advancing gradually on the city from the north west and the north east.

“Ukraine’s next major target is the town of Beryslav, upstream on the Dnipro river,” says Ms Miron. “Once they take that town, then they can mount an attack on Kherson itself. It could be only a matter of weeks away.”

However, says Ben Barry, Senior Fellow for Land Warfare at the International Institute for Strategic Studies, Ukrainian forces have been making quite slow progress towards the city of Kherson.

Is Russia withdrawing from Kherson?

Russia says it has evacuated 70,000 civilians from the city, and there are signs that it is evacuating officials, as well.

The Russian-installed deputy civilian administrator of the Kherson region, Kirill Stremousov, has said Russian forces may retreat from parts of Kherson on the western side of the Dnipro.

“Most likely our units, our soldiers, will leave for the left (eastern) bank,” he said.

However, Ukraine’s military has said talk of troop withdrawals may be a ruse.

Mackenzie Intelligence estimates that Russia has between 5,000 and 10,000 troops defending the city, including units elite troops.

The Institute for the Study of War suggests they are preparing defensive positions within Kherson and to the north west of the city.

“There are conflicting narratives,” says Ben Barry. “Russia is pulling out its administrators, but at the same time it has been putting in paratroopers and naval infantry.”

How costly could a battle for Kherson be?

An assault to retake Kherson would be extremely costly for Ukrainian forces, says Forbes Mackenzie.

“The fighting would be house to house and the casualty rate would be very high,” he says. “The outlook is horrific.”

However, a pitched battle for the city is not inevitable, says Ben Barry.

“Each side has options,” he says. “Russian forces may fight to delay the Ukrainians and then withdraw. The Ukrainians may try to surround the city and cut supply lines rather than enter it.

“It’s impossible to second-guess their strategies.”