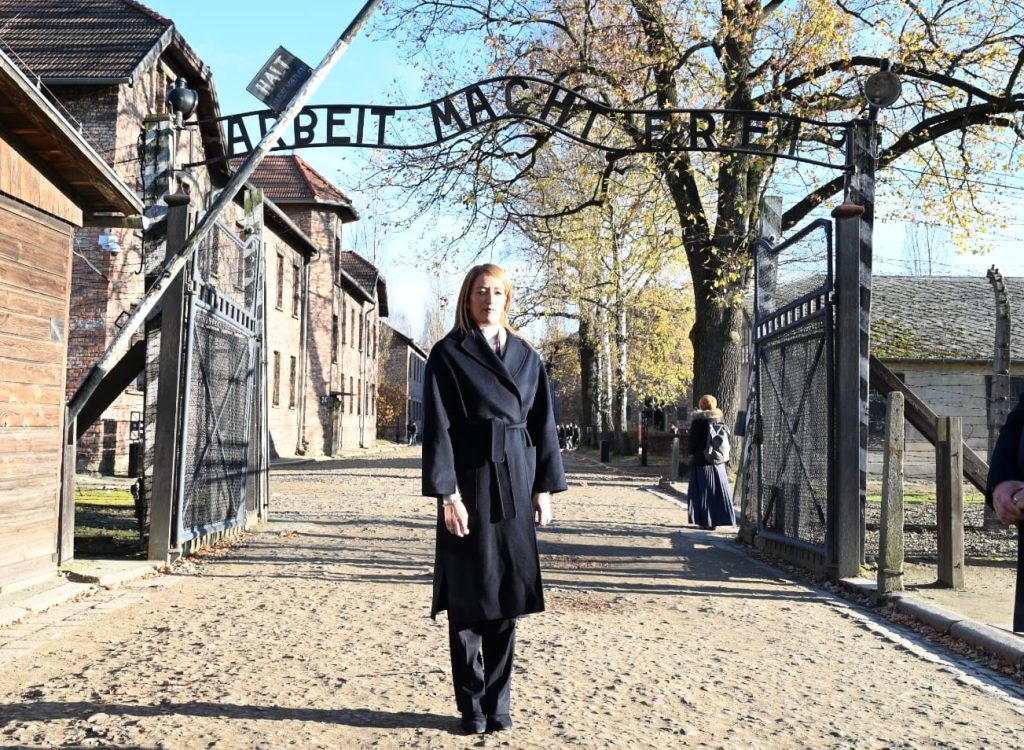 The anniversary of Kristallnacht (the night of broken glass), when the Nazis destroyed synagogues and Jewish-owned businesses on the night of 9-10 November 1938, has been marked by the European Jewish Association with a visit to the Auschwitz-Birkenau death camp. The President of the European Parliament, Roberta Metsola took part in the memorial ceremony and said “it was her duty and responsibility to be there”, writes Political Editor Nick Powell.

“Walking by the train tracks under the full moon, listening to the violin, I could hear the Jews taken from my own home city”, said the Greek MEP Anna-Michelle Asimakopoulou, after taking part in this year’s European Jewish Association visit to Auschwitz-Birkenau. Greek Jews who were among the six million who perished in the Holocaust, among the one million who were murdered at Auschwitz.

To walk from the infamous ‘Arbeit macht Frei’ gate through the remains of the barracks and workshops to the death wall, from the unloading ramp to the remains of the gas chambers and crematoria, is to witness the vast scale of the Nazi killing machine. But there are reminders too of the lost lives of individuals who perished, their seized possessions piled up in an attempt to profit from mass murder.

It was the first visit to Auschwitz by European Parliament President Roberta Metsola. She said it was a journey that everyone should make. “It was hard not to imagine the shadows of the lives we walked in today. The mothers separated from their babies, the parents powerless to protect their children, the screams, the tears, the fear, reverberated in the silence of the leaves falling to the ground”.

At a ceremony in Krakow, President Metsola received the EJA’s King David Award. Her message was that it is not enough to confront the evil of the past but that antisemitism must be ended in today’s Europe. “Every time I visit a synagogue in Brussels, Vienna or anywhere around Europe, I remain struck by the fact that they are always barricaded with security apparatus”, she said.

“It drives home the message that antisemitism is still rife in our societies. That 84 years since Kristallnacht genuine fears still exist. That despite decades of effort, we have not yet dome enough to end the scapegoating, to end the discrimination. We have not done enough to make every citizen in Europe unafraid to be themselves and to worship as they like. That, as we heard today, too many children still do not feel safe saying they are Jewish”.

At the lighting of candles that concluded the visit to Auschwitz, the Chair of the EJA, Rabbi Menachem Margolin, had recounted how only a week earlier his two sons, aged 11 and 13, had returned home shocked and angry after an encounter on a bus from Brussels Schuman station, next to the European Commission and Council buildings.

“One woman, they said, looked at us with hatred as soon as we got on the bus. She hissed ‘dirty Jews’, got up and moved to sit in the back of the bus. It happened, last week, in Brussels”, he said. Rabbi Margolin warned that Holocaust survivors say that the level of  hatred against Jews today reminds them of the hatred before the Second World War.

He said that it was not enough to remember and he appealed to political leaders to use their power wisely and be remembered as the leaders who lived in a generation where another Holocaust could happen again “-and you prevented it”.

In a discussion the next day, there was a focus on the importance of education in making sure that the Holocaust not only continues to be remembered but that its lessons are learned. Dr Helmut Brandstätter, from the Austrian Parliament, observed how young people were arriving in his country from Syria and Afghanistan who had never heard of the Holocaust. Education was needed more than ever now that there were hardly any survivors left to share their stories.

One survivor, who continues to recount her experiences to schoolchildren, is Baroness Regina Suchowolski-Sluzny, of the Antwerp Jewish Forum. She recalled how antisemitism was on the rise in her city before the Second World War, with physical attacks beginning in 1931. Yet, when the Nazis came, half of Belgium’s Jews were saved by the Belgian people -and she was one of them.

Kalman Szalai, from the Action and Protection League, pointed out that although today antisemitic prejudice is higher in eastern European countries, the number of actual antisemitic incidents is lower there than in western Europe. The explanation was that in eastern Europe there is very little hatred of Israel, which is fuelling antisemitism further west.

Most of it was spread by social media, where the clear difference between criticising Israel and denying its right to exist was often lost. That insidious spread of bigotry had also been part of Rabbi Margolin’s message. “Times of war and economic crisis always serve as a platform for a serious escalation of antisemitism”, he said, calling on European leaders to act with greater determination.

He added that attacks on the Jewish way of life are an infringement of freedom of religion and worship and that “defaming the Jewish people and the Jewish state is the definition of incitement and not freedom of expression”.