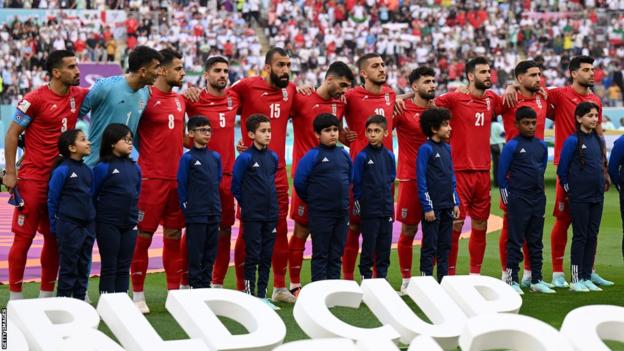 Iran refused to sing their national anthem prior to their World Cup match against England, in apparent support for anti-government protests at home.


During the anthem, some fans hollered and jeered, while others held signs that said “Woman, Life, Freedom”.


Iran state television cut its coverage of this anthem and switched from a wide shot of the stadium to one previously shown.


Protests in mass have been met with a resolute repression in recent months.

These were sparked in September by the murder in custody of MahsaAmini, a 22 year-old woman detained by morality officers for violating strict rules regarding head coverings.


Human rights activists claim that more than 400 protesters were killed and 16,800 people were detained in an Iranian security force crackdown.


Iran’s leaders claim that the protests were orchestrated by foreign enemies.


Iranian fans were also heard shouting “Ali Karimi!” in the first half. This was in reference to the ex-footballer, who is one the most vocal critics of Islam Republic and the most prominent faces of the protest movement.


Fans could also be heard shouting “Be-Sharaf” in Persian, which is meaning “disgraceful”. This is an adjectival that protesters used to describe Iranian security forces.


Many Islamic Republic opponents have criticized the football team for not supporting the protests openly and for meeting last week with President Ebrahim Rasi.

Before the game began, Ehsan Hajsafi, Iran captain, stated that the players “support” the families of those who have passed away.

Manager Carlos Queiroz stated that his players were free to protest women’s rights in her country, as long as the World Cup regulations are followed and the spirit of the game.

Queiroz stated that the political unrest in his country had caused a deterioration of his team’s performance after Monday’s defeat in Group B by 6-2.


“To those that come to disturb our team with issues that aren’t just about football opinions, we’re not welcoming because our boys, we’re just football boys,” said the Portuguese.


“Let them play the game. This is what they want. They wanted to represent their country and the people as well as any other national teams that were here. There are problems at home for all national teams. ”


Former Manchester United assistant said: “It’s not right to ask them to do things that aren’t their responsibility. They want to bring joy and pride to the people.


“You can’t imagine what these kids are doing behind the scenes, just because they want footballers to express themselves. ”


Gary Lineker, BBC Match of the Day’s presenter, said that the incident at halftime was “powerful and very, very significant.”


“Football is trying its power for good. ”

Analysis: “It was a lively game of football, but it was so much more.”


The symbolic gestures of the game were too strong for anyone to ignore. The national anthem was sung by all of Iran’s players, but they refused to sing it at the Khalifa International Stadium.


One fan I spoke with was moved to tears by the words he heard in the stands. His voice broke as he said, “For my people …”.” They’re killing my people.”


The Iranian side received loud and unrelenting cheers. “Iran. Iran” was sounded like a drum and was adorned with the colours, name, and map of Iran.


The Iranian flag was wrapped around women with their hair up and screaming at every team member. Although it was a lively game of football, it was so much more.


A small poster with the words “Woman Life Freedom” was displayed in solidarity with protesters in Iran. Although she didn’t want her to reveal her face, or give her name to anyone, she wanted her message to be heard.


As I was walking through the stands, an Iranian fan whispered to my: “Please tell us our story.” Please, no photos. I would like to return to the country someday and don’t want any problems. ”

Download the BBC Sport app to get the most recent results and goal notifications from any Fifa World Cup team: