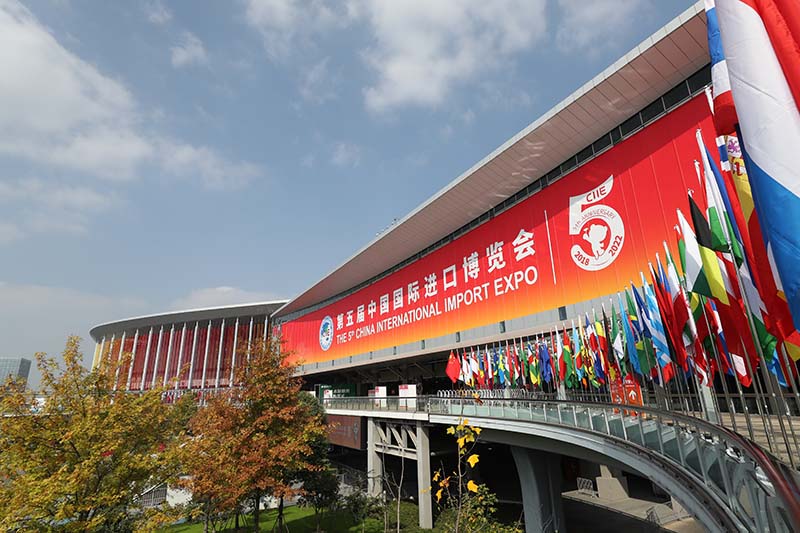 On November 10, the Fifth China International Import Expo (CIIE) was successfully concluded. As a trading nation, Belgium has always attached great importance to export. Eight Belgian companies participated in the business exhibition of this year’s CIIE, including familiar names like Antwerp-Bruges Port, Galler Chocolate, and Trenker Pharmaceutical Laboratories, as well as new partners like Eurofins that provide testing services.

The fifth CIIE is the first major international exhibition held in China after the 20th National Congress of the Communist Party of China (CPC). In terms of involving countries, a total of 145 countries, regions, and international organizations participated in this year’s CIIE, with a more balanced representation of developed, developing, and least developed countries. In terms of the outcomes, over 2,800 companies from 127 countries and regions participated in the business exhibition, and US$73.52 billion worth of tentative deals were reached for one-year purchases, an increase of 3.9 percent over the previous session. In terms of exhibitor categories, 284 of the world’s top 500 companies took part, exceeding the previous session. Multinational enterprises and emerging companies remain optimistic about China’s business environment and market capacity, as nearly 90% of them were frequenters to the CIIE.

China sets up a platform for the world to share opportunities. As the world’s first national-level exhibition on import, the CIIE has made steady progress over the past five years. The three-dimensional feature of the CIIE defined by President Xi Jinping in his speech at the opening ceremony this year sends out a clear message that on the new journey, China will accelerate the creation of a new development pattern, pursue high-quality development, stay committed to opening-up, and promote economic globalization.

The CIIE is “a showcase of China’s new development pattern”. It is noted in the Report to the 20th CPC National Congress that China will leverage the strengths of its enormous market, attract global resources and production factors with its strong domestic economy, and amplify the interplay between domestic and international markets and resources to improve the level and quality of trade and investment cooperation. In creating a new development pattern, import plays an important role in connecting domestic and global markets. Import not only facilitates upgrading and supply of the domestic market but also determines the depth and width of China’s participation in economic globalization. Further expanding imports will contribute to creating China’s new development pattern, and provide trading opportunities for a great many partners.

The CIIE is “a platform for high-standard opening-up”. It is noted in the Report to the 20th CPC National Congress that China remains committed to the fundamental national policy of opening up to the outside world, and pursues a mutually beneficial strategy of opening up. China strives to create new opportunities for the world with its own development and to contribute its share to build an open global economy and deliver greater benefits to all people. Hosting the CIIE is China’s major decision to pursue a high-standard opening-up and China’s major initiative to open its market wider to the rest of the world. In recent years, China has accelerated building its strength in international trade. China has become a major trading partner for more than 140 countries and regions and has advanced a broader opening-up agenda covering more areas and in greater depth. In the first three quarters of this year, China’s imports totaled RMB13.44 trillion, up by 5.2 percent year-on-year. From January to October, China’s imports from Belgium amounted to US$7.49 billion, which increased by 7 percent over the same period last year. China’s stable import has effectively promoted the economic development and domestic employment of relevant exporting countries.

The CIIE is “a public good for the whole world”. It is noted in the Report to the 20th CPC National Congress that China adheres to the right course of economic globalization. It strives to promote trade and investment liberalization and facilitation, advance bilateral, regional, and multilateral cooperation, and boost international macroeconomic policy coordination. It is committed to working with other countries to foster an international environment conducive to development and create new drivers for global growth. As we speak, the international landscape is complex and challenging. World economic growth is losing steam and economic globalization has encountered headwinds as certain countries have been pushing for decoupling and building exclusive blocs. Such an approach is not in line with international expectations. The world will never fall back into isolation and division, and open cooperation and mutual benefits remain the trend of the times and people’s aspirations.

China’s new development creates new opportunities for the world. Given the high complementarity of their economies, China and Belgium enjoy great upgrading potential to achieve better quality and higher-level cooperation. Embarking on a new journey, China will continue to pursue high-standard opening-up, work with Belgium and other European countries to build an open world economy that is innovative and inclusive, and strive toward the goal of building a human community with a shared future.

China looks forward to receiving Belgian enterprises from different sectors again at the 6th CIIE next year. The open and enormous Chinese market welcomes you.