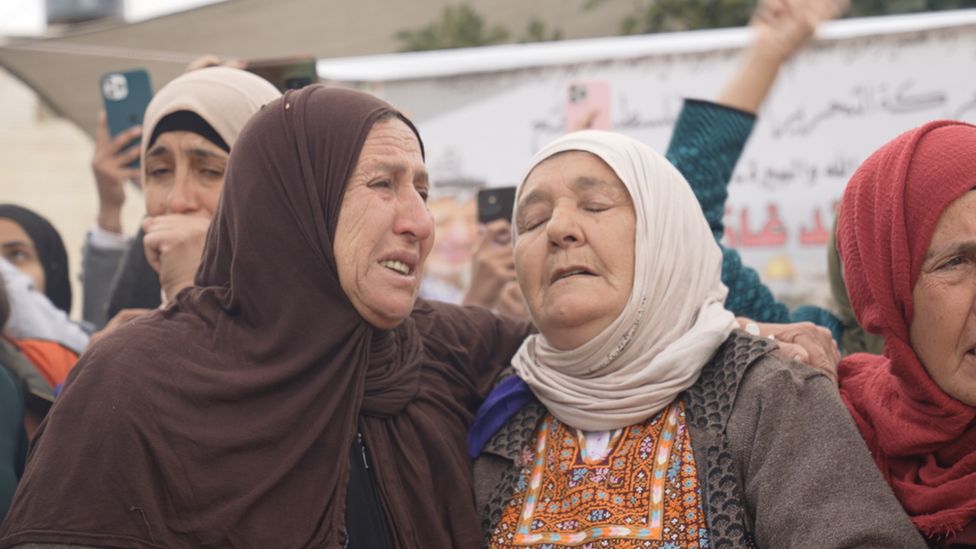 Israeli troops had entered the village warning of plans to demolish a Palestinian home.

Footage shows a group of men and teenagers throwing rocks – then pulling back – as two shots ring out.

Raed al-Naasan runs around a corner and collapses, blood seeping into his top, fatally wounded.

He was killed on Tuesday – one of four Palestinians shot dead by Israeli troops during confrontations in different villages that day in the occupied West Bank.

And now that footage of his killing is throwing a fresh spotlight on Israel’s use of lethal force, as violence in the region reaches levels unmatched in years.

In the hours after his death the army said soldiers used live ammunition in response to a suspect “spotted hurling Molotov cocktails [petrol bombs]” at them.

But video evidence and eyewitnesses suggest this wasn’t the case when he was struck.

This year in the West Bank more than 140 Palestinians have been killed, nearly all by Israeli forces. The dead include civilians and armed militants. Meanwhile a series of Palestinian attacks targeting Israelis, as well as militant gunfire at troops during arrest raids, have killed more than 30 people including civilians and troops.

The United Nations’ envoy to the region Tor Wennesland warned this week that the conflict and military occupation was “again reaching a boiling point”.

Campaigners from the Israeli human rights group B’Tselem are currently probing Mr Naasan’s death, saying that a significant number of cases of protesters being shot dead this year amount to “excessive use of force”.

The Israel Defence Forces (IDF) said it had acted to stop “violent rioters” and the incident was being “examined”.

Troops entered the village of al-Mughayyir on Tuesday to serve demolition orders against “illegal construction” – this happens when Israeli authorities plan to bulldoze Palestinian homes built without permits, even though these are often impossible to obtain.

Mr Naasan, 21, was shot dead after a group of around 20 young men and teenagers gathered and threw stones towards the jeeps and soldiers.

Under international law, the use of firearms by security forces against civilians is defined as a measure of last resort, and can only take place to stop an “imminent threat of death or serious injury”.

Video given to the BBC filmed for nearly a minute before the shooting shows the group, including Mr Naasan, appearing to pick up stones from the street and throw them towards troops who are not visible in the footage. None can be seen throwing petrol bombs. Mr Naasan then stands in front of his family home apparently holding stones, when two gunshots can be heard. The second is thought to be the shot which left him fatally wounded.

Paramedic Mujahid Abu Aliya rushed to treat him at the scene.

“No-one threw a Molotov cocktail, I was here…. When I picked him up he was screaming: ‘I will die, I will die’,” he said.

Mr Naasan’s mother Fatma described how she ran after him moments later desperately trying to help.

“[The troops] are the ones who attacked us – they came towards the house in the confrontations and the young people participated,” she told the BBC shortly after her son’s funeral.

Another eyewitness, Raghd Jehad, said: “When they started shooting live ammunition, all the men dispersed except him, he was standing there.”

“They have been raiding the village for a week now. This is an occupation and they come when they like,” he added.

Mr Naasan had recently finished his studies and was training as an officer in the Palestinian Authority security services, the internationally-backed force that carries out internal policing in parts of the West Bank.

In a statement the IDF said: “Only a portion of the event is depicted in the video. IDF soldiers encountered violent rioters… among them the deceased.”

“The man hurled a Molotov cocktail at the forces, who opened fire in response. The circumstances of the event are being examined.”

The village of Al-Mughayyir has witnessed years of confrontations with Israeli troops. It is close to some of the West Bank’s most ideologically-driven Israeli settlements from where groups have tried to build outposts on land near the village.

Settlements are seen as illegal under international law, and most outposts are also prohibited under Israeli laws.

Residents of Al-Mughayyir said they feared a worsening situation.

Israel’s incoming national security minister is set to be the far-right firebrand Itamar Ben-Gvir – a staunch supporter of settlements who calls for stone-throwing Palestinians to be shot. He also wants Israeli soldiers to have immunity from prosecution in cases where Palestinians are killed.

Dror Sadot from B’Tselem, the human rights group, described 2022 as an “extreme year” in terms of Palestinian fatalities.

“There are many cases of protests where the Palestinians are using rocks, stones and sometimes other means, and Israel’s army almost always uses disproportionate force,” she said.

The IDF rejects this, routinely saying it carries out internal investigations into Palestinian fatalities. But human rights groups have described such inquiries as a “whitewash”.

Amid the worsening violence this week, an Israeli soldier was left seriously wounded when a Palestinian man – later shot dead – rammed his car into her near a West Bank settlement. Israeli forces are also still searching for suspects after a twin bomb attack in Jerusalem last week which killed two Israelis.

Since the spring, Israel has carried out near nightly search and arrest raids in the West Bank, and says it will continue its operations to prevent the threat of further attacks.