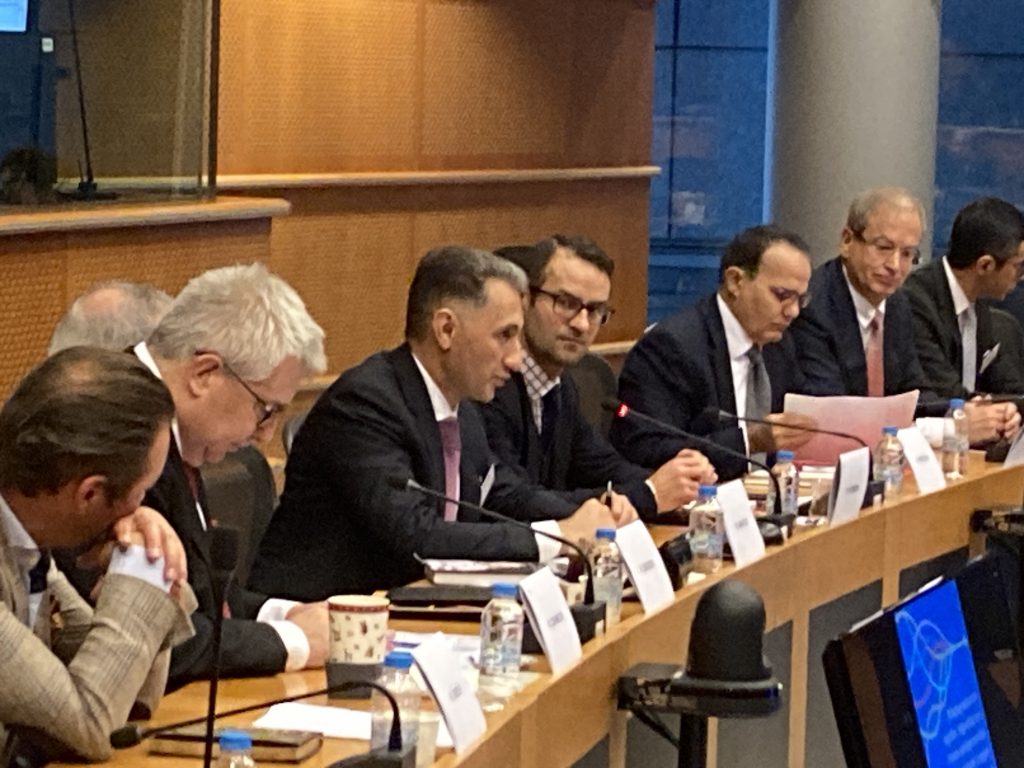 Azerbaijan is a crucial part of the Middle Corridor trade route. However, freight transit through Azerbaijan has increased by 70% over ten months, while journey times have dropped half. Nick Powell, Political Editor, has been updated by the Minister of Digital Development and Transport about plans to improve speed and capacity.

Rashad Nabiyev (Azerbaijan’s Transport Minister) addressed a roundtable in the European Parliament. He recalled that once there was scepticism at Brussels regarding the importance of the transit route through his nation. However, the vision of the Baku government over many decades has been vindicated.

Europe was able to have greater energy security thanks to gas pipelines. Now, the focus is on eliminating bottlenecks along Middle Corridor. Governments and shipping companies are looking for alternatives to sending freight through Russia. Kazakhstani goods and those from its neighbors, including China, cross the Caspian Sea, through Azerbaijan, Georgia, and either reach the Black Sea, or continue by land across Turkiye.

The average transit time has been reduced from 38 days down to 21 days, and the Middle Corridor states are aiming for 18 days. Minister Nabiyev stated that all the progress made so far was “very manual” and that digitalization of the process is one of the most important elements of plans for the next five-years.

Kunio Mikuriya, Secretary-General of World Customs Organisation, stressed the importance of digitization. Kunio Mikuriya, Secretary-General of the World Customs Organisation, stated that it was essential to have harmonised and paperless border procedures. He also stressed the importance of “a seamless flow in reliable data in a timely fashion”. He said that this requirement extended beyond customs formalities and included railway systems, which also need to digitize and share their paperwork.

Kunio Mikurio suggested EU funding should be used to support such capacity-building, as part the Global Gateway initiative. Mehmet Kemal Bozay (the Turkish Ambassador to EU), stated that Turkiye had been the Global Gateway’s gatekeepers. He said that the Middle Corridor was both the most direct and greenest route between Asia and Europe.

Koert Debeuf, a member of the Free University of Brussels (VUB), stated that European policy has often been reactive and that the EU was responding now to the Russian invasion of Ukraine and China’s Belt and Road Initiative. He called for a deeper understanding of the history of the Middle Corridor, and how it was revitalizing the Silk Road. He called for a vision that connects people and not only cities and pipelines.

Round table members were shown an expert presentation about how Azerbaijan and Kazakhstan worked together to reach a capacity of 15,000,000 tonnes per year. These included improvements to ports and terminals, as well as the purchase of new wagons and locomotives for railways. A control centre was also established in Baku.

A reopening of the Zangazur corridor could increase the annual capacity by 15 million tonnes. This would allow for a new rail link through Armenia that will connect Nakhchivan to the rest Azerbaijan, and create a route to Turkey. Rashad Nabiyev said, “We will one-day manage it”, and also highlighted the improvements in road and rail infrastructure in Karabakh that were formerly occupied with Armenia.

Andris Ameriks, Latvian MEP, stated that there should be no boundaries to cooperation between Azerbaijan and the EU. He called it “an important bridge between Europe & Asia”. Ryszard Ciarnecki MEP from Poland said that the Middle Corridor was a “great opportunity” to seize. Tomasz Poreba (Polish MEP) explained how the Via Carpathia Road project, which runs the length of the EU’s eastern border from the Baltic States to Greece, would increase the potential for goods to reach all of Europe’s markets.