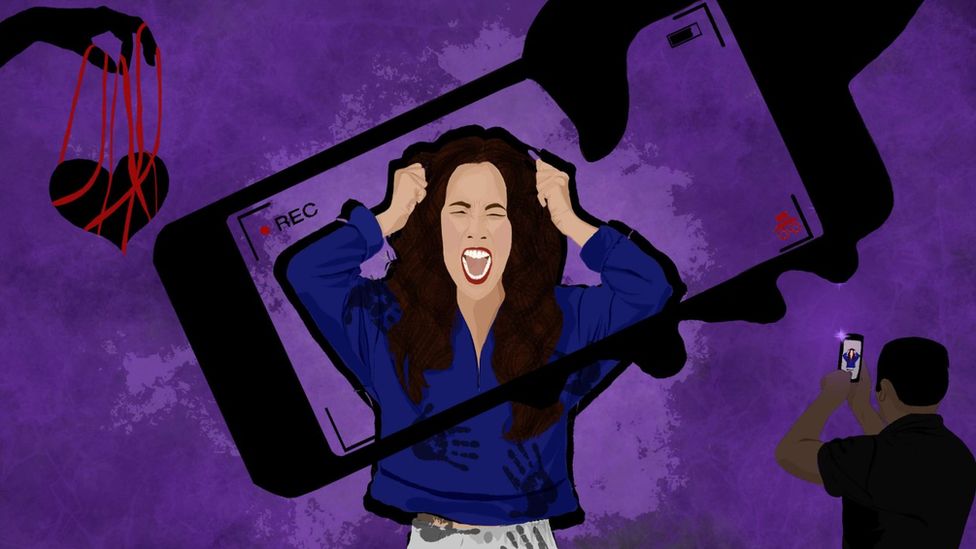 In Italian, “mano morta” means “dead hand”. It is discussed between mothers and daughters, groups of friends complain about it in their chats, and teenage girls are warned to be vigilant as they make their way to school.

But the dead hand is not spooky folklore. It is a form of sexual assault most commonly performed against women – it describes the lingering hand countless women have encountered resting against intimate parts of their body on a packed bus or train.

Among Italians, “mano morta” accurately pinpoints this intentional behaviour. Women around the world may have also experienced the same form of assault, but might not have a word in their language to name it.

In English, “gaslighting”, “upskirting” and “love bombing” are increasingly being used to describe forms of abuse.

Gaslighting – the act or practice of grossly misleading someone, especially for one’s own advantage – was named Merriam-Webster dictionary’s word of 2022, with a 1,740% increase in search on their site this year. On TikTok, #gaslighting has 1.9 billion views, and #lovebombing almost 250 million.

“If we look at when these words got into the language to describe the experience of women in terms of sexual violence or other forms of sexism, it was when feminism became a big social movement,” says Dr Alessia Tranchese, who researches how violence against women can be perpetuated through language.

A senior lecturer in communication and applied linguistics at the University of Portsmouth, Dr Tranchese studies how new words coined to describe existing forms of abuse are a means to challenge gender violence.

“We could say that language both reflects the unequal relationships between men and women, and is a place where these relationships can be enacted and recreated,” she adds.

But can the introduction of new terms really help tackle abuses faced by women around the world?

BBC 100 Women, which names 100 inspiring and influential women around the world every year, speaks to three women who have been spreading the word – literally – about new expressions to describe sexual assault and harassment, from the UK, to South America and the Middle East.

When Michaela Coel’s I May Destroy You hit television screens in 2020, it was an immediate success among critics.

But the award-winning British series, which charts one woman’s journey following her sexual assault, had ramifications beyond the world of TV critics – making waves in the real world 12,000 miles away.

Maite Orsini, a 34-year-old Chilean politician and member of parliament, was shocked by one particular scene, in which protagonist Arabella learns a man removed the condom without her consent during a sexual encounter. She later discovered non-consensual condom removal, or stealthing, is classified as rape in the UK, Germany, Canada and the state of California, in the US.

“I had not become aware that this was indeed sexual assault, and I think that when I saw it depicted in the series I understood it,” says Ms Orsini, a lawyer by profession with a master’s degree in public safety.

Since stealthing wasn’t considered a crime in Chile, there were no official statistics on the number of cases. But as Ms Orsini spoke to more friends, acquaintances and colleagues, it became clear this was an issue that transcended borders – and victims had no legal protections to help them.

She decided stealthing needed to be put into black and white in Chilean law, and began to draft a bill.

“We had a long debate about finding a word in Spanish to name stealthing, but I refused to do that. I wanted those who had been a victim to be able to recognise that the concept is being used out there [in English], and they could go on the internet and find information if they needed it.”

Her stealthing bill swept through the Lower House of the Chilean Parliament in January, and has now moved to the Senate. Ms Orsini’s bill would make stealthing a crime – a punishable form of sexual assault.

This could be seen as a shift in how women are reclaiming power over language, says Dr Tranchese.

“If you think about things like dictionaries, who makes dictionaries? Historically, it’s been men.

“Women were not allowed to be writers or lawyers or doctors. The knowledge, the meaning-making process, was a prerogative of men.”

Ms Orsini agrees on the pivotal role language can play for women who have been through abuse.

“I think that naming behaviours that have not been previously named may lead to victims being able to recognise themselves as victims,” she says.

“I wanted stealthing to be in the penal code, to create awareness that this crime exists, so that women and girls know that when they are victims of this type of behaviour, it is sanctioned in our legislation, and they can therefore report it.”

Language is also being used to capture how women feel increasingly unsafe in public spaces, according to one Northern Ireland politician.

A new sexual offences bill, proposed by former Justice Minister Naomi Long, made its way into law in Northern Ireland in March.

She is one of the women featured on the BBC 100 Women list, which this year is honouring that progress that has been made since the list’s inception 10 years ago.

The bill featured a number of new terms, including “downblousing”- coined to describe the act of taking photos down a person’s top without consent.

“It’s a very particular kind of harassment,” says Ms Long. “It’s an attempt to humiliate and degrade women and cause fear.”

Previously, the crime was not specifically mentioned in law, making it difficult for both victims and police to understand what could be done, Ms Long says.

“It can be very distressing when you know that you have experienced a violation of your privacy, and it causes anxiety and humiliation, but you go to the police and they’re not sure that’s a crime.”

Language itself, and the gendered connotations of the word “downblousing”, were part of the discussion, says Ms Long.

“There was some discussion about whether it should be blouse or shirt or top, there was a bit of discussion as to whether there would be references to breasts or chest.

“I felt it was important that we recognise that people are not going around trying to take photos down men’s shirts. It’s just not happening, it’s not a thing.”

Northern Ireland is the first jurisdiction in the UK to make downblousing a specific criminal offence. The Law Commission has called on England and Wales to follow suit.

“Language does matter. How we describe these things matters,” says Ms Long. “It will allow society to give a name to something that they know is wrong, but have often struggled to articulate why.”

How does language work?

Prof Lera Boroditsky’s job is to research how humans “get so smart” and a very important part of that answer is language, she says.

The cognitive scientist examines the relationship between our minds, language and reality, and in particular how we create meaning in society.

“How you describe an event or an accident can dramatically change how we blame and punish the people involved,” she says.

When we consider the impact of a name or word given to a particular concept, it’s also important to consider its specificity, Prof Boroditsky says.

“For example, it used to be that sexual assault victims might be asked in court, ‘And is that when he kissed you?’ Kissing is this really nice thing for most people, but not when it’s forced oral contact with a stranger. So if you call it ‘forced oral contact’ instead, that creates a very different image in the mind of the jury – that specificity creates a different emotional response than a word that is more familiar or generic.”

On a daily basis, Lamya Lotfey witnesses the abuses faced by women in Egypt – including often unreported cases of marital rape.

“And the problem is that women themselves may not realise this is a violent act against them,” she says.

A 2018 report by the World Health Organisation (WHO) showed that in Egypt 30% of ever-married or partnered women aged 15 to 49 experience physical or sexual intimate partner violence in their lifetime.

Most victims of marital rape do not even identify it as such. “So who will they complain to, and about what?” she asks.

Men convicted of rape in Egypt can face life imprisonment or even the death penalty – yet marital rape does not appear in the country’s penal code.

Ms Lotfey’s organisation has helped to draft a bill which specifically names marital rape. It is the second time the proposal has been submitted to parliament – and she is patiently waiting for it to be discussed on the floor.

“Rape is rejected and punished in society, and this is why there is resistance to use the term when it comes to marital relationships: once you label it ‘marital rape’, there is an immediate condemnation of the man. They are trying to alienate the term itself from men,” Ms Lotfey says.

Limitations in language go beyond policymaking and permeate everyday conversations, she argues.

The phrase “aghtesab zawgy”, which translates as “marital rape”, started to be used by Egyptian human rights campaigners in the 80s, but remained confined to a minority, she says.

Slowly, things are starting to change. She credits the 2020 TV series Newton’s Game, which features a scene where a woman is raped by her husband.

“This was the moment I noticed women saying to me, ‘This happens to us.’ Some started to even use the term ‘aghtesab zawgy’. Some said to me, ‘So if we say this is happening to us, they will take us seriously?’ But before that, it was hushed up or ignored, as if it didn’t exist.”

Linguist Dr Alessia Tranchese points to the bonding role of language, that can help create a sense of community by means of identification.

“I think having these words has given women the ability to see that their experiences are not isolated – ‘This is something that he did to me once’ – but part of a larger systemic issue that affects lots of women,” she says.

“Naming makes it more obvious that it’s a shared experience.”