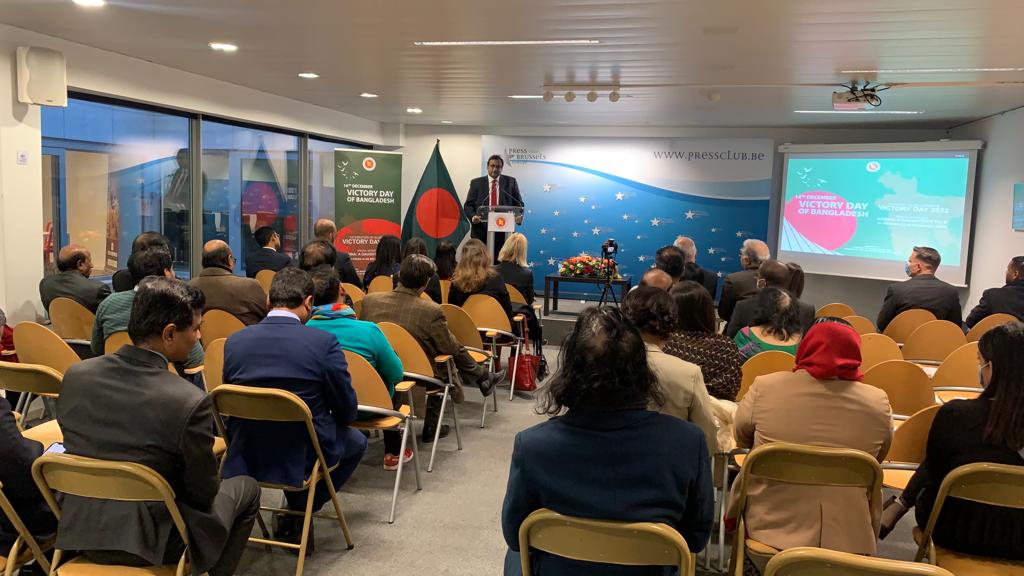 The anniversary of the surrender by the Pakistan Army to the newly independent country and its Indian ally, Bangladesh’s Victory Day has been commemorated in Brussels by the Embassy to the European Union. Although 16 December 1971 was a day marked by triumph, it was also the culmination of nine months of atrocities and tragic losses, writes Nick Powell, Political Editor.

Mahbub Hassan, the Bangladeshi Ambassador, addressed a crowd at the Brussels Press Club that included members of the Belgian Bangladeshi community, EU institutions and think tanks, as well as media. He expressed his deepest gratitude to Bangabandhu Shaikh Mujibur Rahman (the Father of the Nation), and to the three million martyrs in the Liberation War.

He spoke of the contributions of the international community, especially India’s extraordinary support in the War of Liberation of Bangladesh. He talked about the historical struggle, courage and perseverance of Sheikh Mujibur Rahman to lead his country to freedom. This journey was also taken up by his daughter Sheikh Hasina, who is now Prime Minister of Bangladesh.

The special screening of the documentary Hasina – A Daughter’s Tale was held. It tells the story about the struggle of Sheikh Rehana and the Prime Minister after their father, and all their relatives, were murdered in a military coup that took place on 15 August 1975. This film is the result of five years’ research and effort. It tells the story of Sheikh Hasina’s life, not just as a politician, but also as a human being.

It depicts her journey from terrorist act to triumph as a politician, and her achievement of Bangabandhu’s dream of building “Sonar Bangla” (or “Golden Bengal”) The Ambassador spoke about his country’s pride in the present world. He spoke out about how Bangladesh’s foreign policy is guided by humanity and the pursuit for peace. Bangladesh temporarily houses more than 1.1million Rohingyas who have been forced to flee Myanmar.

Santosh Jha (India’s Ambassador) spoke about how their friendship has stood the test of history. Santosh Jha described Bangladesh as India’s most friendly neighbour. Their friendship was built on a foundation of sweat, tears, blood, and toil. The world still doesn’t fully appreciate their historic and significant victory, which was achieved with great sacrifice.

Dechen Wangmo (Bhutanese Charge of Affaires) spoke out about how Bangladesh and her country were soon to be freed from their statuses as least developed. Monika Bylaite (Deputy Head, South Asia Division), called Bangladesh a strategic player and growing influence in the Indo-Pacific region where it is an important EU partner on trade, security and climate change.

The day began earlier at the Bangladeshi Embassy, with the Ambassador hoisting the national flag, placing a floral wreath on the portrait of Bangabandhu, and reading messages from the President and Prime Minister.