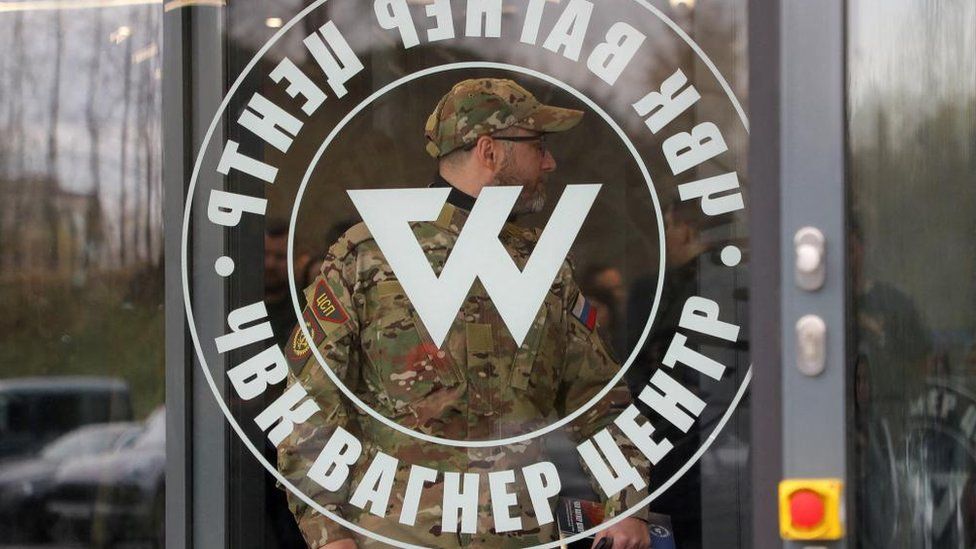 Fighters from Russia’s mercenary Wagner Group have ballooned from 1,000 to nearly 20,000 in Ukraine, British government officials say, a sign of Russia’s growing reliance on the military contractor in support of its invasion.

Russia is widely believed to be struggling to recruit soldiers and maintain morale. The West estimates Russia has lost tens of thousands of soldiers and President Vladimir Putin launched a recruitment drive in September to boost numbers.

Meanwhile, Russia has suffered a series of setbacks on the battlefield and UK officials believe Russia is turning to the Wagner group as a consequence. The private military company is now actively promoting its role in the war. As is its main backer, Yevgeny Prigozhin, the man once known as Putin’s chef. But, so far, Wagner’s bark seems to be proving worse than its bite.

The BBC has been briefed by UK officials who’ve been tracking the activities of the Wagner Group. They say the group is now playing a much higher profile role in the war in Ukraine. But officials add that Wagner has also traded “quality for quantity” and is now facing the same challenges and losses on the battlefield as the wider Russian military.

Wagner’s influence and presence has only got stronger, as Russia’s invasion plans have stuttered, stalled and suffered setbacks. In March 2022, Wagner was thought to have sent an initial force of just over 1,000. But, according to UK officials, that number has now grown to more than 20,000 – around 10% of the total Russian forces on the ground.

Many convicts are believed to have joined Wagner – though there are no precise numbers. In return they have been told they’ll get paid and have their sentences commuted after serving six months on the front line. Whilst Wagner claims to pay compensation to the families of those killed in action, there are reports some receive nothing.

UK officials say there’s been a pivot from quality to quantity. In the past, Wagner was believed to recruit mostly experienced former soldiers – including from Russian military intelligence, known as the GRU, and ex-special forces.

Wagner’s group field commander, Lt Col Dmitry Utkin, was an officer in the GRU’s Spetsnaz (special ops). But UK officials say that Wagner is now “far from an elite force”.

In recent months Wagner has taken a high profile role in the brutal assault of Bakhmut in Ukraine’s eastern Donbas region.

A recent UK defence intelligence assessment highlighted Wagner’s tactics. It said Wagner was using large numbers of poorly trained convicts – which it viewed as expendable. It said they were likely given just a specific, limited objective – like assaulting a building – without being allowed to deviate from the plan.

The UK intelligence assessment said those who deviated were likely threatened with summary execution.

UK officials say needless and indiscriminate violence is a hallmark of the group. Wagner recently released a video of one of its members bludgeoning an alleged deserter to death.

Which underlines the other significant change in Wagner’s approach – it’s now actively courting publicity and promoting the brand.

In July Wagner launched its own channel on the social media platform Telegram.

In September it opened up a glitzy new headquarters in St Petersburg – named “PMC Wagner Centre”. It said it was for “the generation of new ideas in order to increase the defence capabilities of Russia, including the sphere of information”.

UK officials say there’s recently been a notable increase in information operations by Wagner in Ukraine.

Its leader, Yevgeny Prigozhin, once threatened journalists with defamation for linking him to the group.

Now he appears to be actively courting the limelight. He’s been seen in a “leaked” video recruiting convicts in a Russian prison. He’s funded a film about Wagner in Ukraine called “The Best in Hell”.

Prigozhin finances his group and his own ambitions with a lucrative $1bn (£830m) contract to provide catering for the Russian state. He’s also believed to be making more money from Wagner’s mercenary activities in Africa in exchange for rights to extract rare minerals. Wagner mercenaries in the Central African Republic and Mali have been accused of serious human rights abuses.

It is Wagner’s activities in Ukraine that have lifted any veil of secrecy surrounding the organisation. UK officials believe Prigozhin wants Ukraine to be his “glossy brochure” for the group’s success. A vehicle to promote his own ambitions as part of Putin’s inner circle and “saviour of the motherland”.

But in reality they see Wagner facing the exact same challenges as Russia’s military – suffering the same shortages of equipment and high rate of casualties. Some of its troops may be better paid and better equipped than the average Russian soldier, but many are not. UK officials say Wagner personnel are also likely facing gruelling conditions and materiel shortages in Ukraine.

There is still a blurred line between Wagner and the Russian military. UK officials say it is likely that elements within Russia’s defence ministry remain sceptical of the group.

Senior Kremlin officials, including President Putin, have still not acknowledged its ties to the Russian state.

But UK officials say it is almost certain that Wagner deployed to Ukraine with the sanction of senior officials and that the mercenaries are now working in “operational lockstep” with the Russian military. Wagner’s primary training area is within a Russian defence facility at Molkin, 300km (185 miles) east of Crimea.

So far there’s little evidence that Russia’s proxy army Wagner is any better than its own regular armed forces.