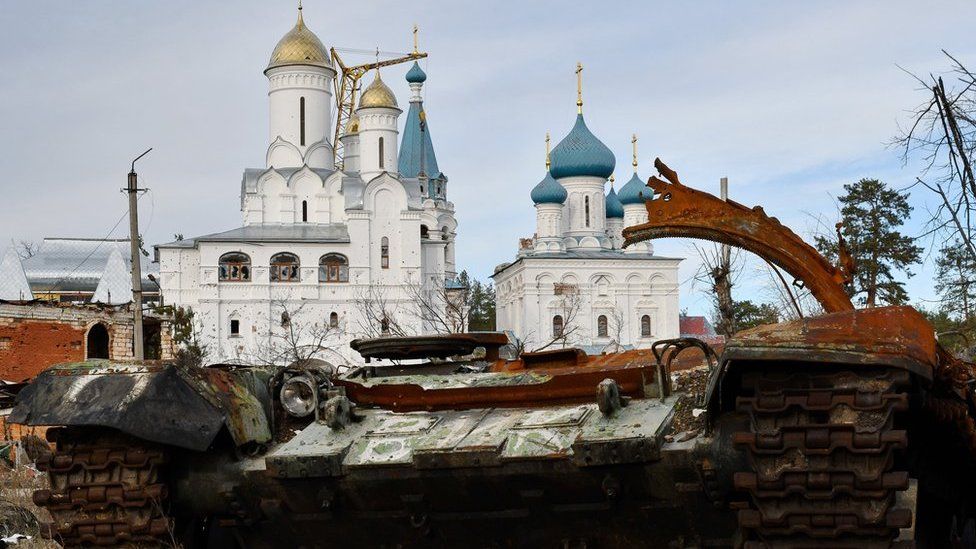 The conflict in Ukraine is about to enter its second calendar year. We asked several military analysts how they think events on the ground will unfold in 2023.

Could it conclude in the coming year and how – on the battlefield or at the negotiating table? Or might it grind on to 2024?

‘Russia’s spring offensive will be key’

Those who seek to invade another country anywhere across the great Eurasian steppes are condemned eventually to winter in it.

Napoleon, Hitler and Stalin all had to keep their armies moving in the face of a steppes winter, and now – his invasion going backwards on the ground – Vladimir Putin is digging his forces in for the winter to await a new Russian offensive in the spring.

Both sides need a pause but the Ukrainians are better equipped and motivated to keep going, and we can expect them to maintain the pressure, at least in the Donbas.

Around Kreminna and Svatove they are very close to a big breakthrough that would throw Russian forces 40 miles back to the next natural defensive line, close to where their invasion effectively began in February.

Kyiv will be reluctant to halt when the immediate prize is so great. Ukrainian offensives might, nevertheless, pause down in the south-west, following the recovery of Kherson.

Crossing over to the east side of the Dnipro river to pressure Russia’s vulnerable road and rail links into Crimea might be too demanding. But the possibility of Kyiv launching a surprise new offensive can never be ruled out.

For 2023, the key determinant will be the fate of Russia’s spring offensive. Putin had admitted that about 50,000 of the newly mobilised troops are already at the front; the other 250,000 of those just mobilised are training for next year.

There is no scope for anything but more war until the fortunes of those new Russian forces are settled on the battlefield.

‘Ukraine will win back its land’

Andrei Piontkovsky, scientist and analyst based in Washington DC

Ukraine will win by restoring completely its territorial integrity by spring 2023 at the latest. Two factors are shaping this conclusion.

One is the motivation, determination and courage of the Ukrainian military and Ukrainian nation as a whole, which is unprecedented in modern war history.

The other is the fact that, after years of appeasement of a Russian dictator, the West has finally grown up to realise the magnitude of historical challenge it faces. This is best illustrated by a recent statement by Nato General Secretary Jens Stoltenberg.

“The price we pay is in money. While the price the Ukrainians pay is in blood. If authoritarian regimes see that force is rewarded we will all pay a much higher price. And the world will become a more dangerous world for all of us.”

The exact timing of the inevitable Ukrainian victory will be determined by the speed at which Nato can deliver a new game-changing package of military assault weapons (tanks, planes, long-ranged missiles).

I expect Melitopol will become the key battle point in the coming months (maybe weeks). Having taken over Melitopol, Ukrainians will easily move to the Azov Sea, effectively cutting off supply and communication lines to Crimea.

Russian capitulation will be formally agreed upon at technical talks after devastating Ukrainian advances on the battleground.

‘There is no end in sight’

Vladimir Putin expected Ukraine’s passive acceptance of its more powerful neighbour’s actions, with no meaningful involvement of other countries. This grave miscalculation has led to a protracted conflict, with seemingly no end in sight.

The winter will be difficult, as Russian attacks on Ukrainian infrastructure will try to break the morale and endurance of an already shattered population. But Ukrainian resilience has proved to be remarkable. They will stand firm. The war will drag on. And on.

The prospects for negotiation are bleak. For a potential peace deal the core demands of at least one side need to change. There is no evidence that this has happened, or that it will happen soon.

How will the end come, then?

The costs of the war, both material and human, might break the level of commitment of the Russian political elite. The key will be inside Russia.

Past wars in which miscalculation was a crucial element, such as Vietnam for United States, or Afghanistan for the Soviet Union, only ended in this way. Domestic political conditions shifted in the country that had miscalculated, making exit – either “honourable” or not – the only viable option.

This may only happen, however, if the West stands firm in its support for Ukraine, in the face of increased domestic pressures linked to the costs of the war.

Sadly, this will continue to be a long-protracted political, economic and military battle of resolve. And by the end of 2023 it will most probably still be ongoing.

‘No other outcome except Russian defeat’

It’s too early to plan a victory parade in Kyiv but all the momentum is with Ukraine now and there is no doubt in my mind that they will win this war, probably in 2023.

Things will move slower over the winter but there’s no doubt that Ukraine’s forces will be better able to cope than Russia’s because of all the winter equipment coming from the UK, Canada and Germany.

By January, Ukraine could be in a position to begin the final phase of the campaign which is the liberation of Crimea.

We know from history that war is a test of will and a test of logistics. When I see the determination of the Ukrainian people and soldiers, and the rapidly improving logistical situation for Ukraine, I see no other outcome but a Russian defeat.

The Russian pull-out from Kherson has partly led me to this conclusion. Firstly as a psychological boost for the Ukrainian people, secondly as a profound embarrassment for the Kremlin and thirdly by handing Ukraine’s forces a key operational advantage – all approaches into Crimea are now within range of Ukrainian weapon systems.

I believe that the end of 2023 will see Crimea fully restored to Ukrainian control and sovereignty though there may be some sort or agreement that allows Russia to phase out some of its naval presence in Sevastopol… perhaps even to the end of the treaty (approximately 2025) that had existed before Russia’s illegal annexation of Crimea.

Reconstruction efforts will be under way on the Ukrainian infrastructure along the Azov Sea coast, including the important ports of Mariupol and Berdyansk, and the reopening of the North Crimean Canal that diverts water from the Dnipro to Crimea will be another important project receiving attention.

‘Expect more of the same’

Instead of “how it’s going to end” here is what each side would like to achieve in the next phase.

Only about half of Russia’s 300,000 mobilised troops are already in the fighting zone. The rest, together with the forces freed for action after Kherson withdrawal, gives the Russians an opportunity to launch an offensive.

The occupation of the Luhansk and Donetsk regions will continue but a major Russian breakthrough like a drive from the south to Pavlograd to encircle the Ukrainian forces in the Donbas is less likely.

More probable is a continuation of current tactics – a slow grinding of Ukrainian forces on narrow directions and a slow advance, like in Bakhmut and Avdiivka areas, with possible same tactics in Svatove-Kreminna area.

Continuing targeting of Ukrainian energy infrastructure and other attacks on Ukrainian rear will complete this war of attrition strategy.

Significant Ukrainian forces were also freed after a Russian retreat from Kherson. For them the most strategically valuable direction is south, to Melitopol or Berdyansk, aiming to cut the Russian mainland corridor to Crimea. That would be a major Ukrainian victory, and that is exactly why Russians are fortifying Melitopol.

Another option for Ukraine is Svatove – success there would endanger the whole northern flank of the entire Russian frontline.

The big question is how many Ukrainian forces are free and available for the offensive at this point, and what timetable General Zaluzhnyi has on his desk stating how many new reserve brigades and corps that are being built will be ready in one, two or three months from now, including manpower, armoured vehicles and heavy weapons.

After the mud freezes, we will get the answer to this question. And this answer will get us a little closer to “how it’s going to end”.