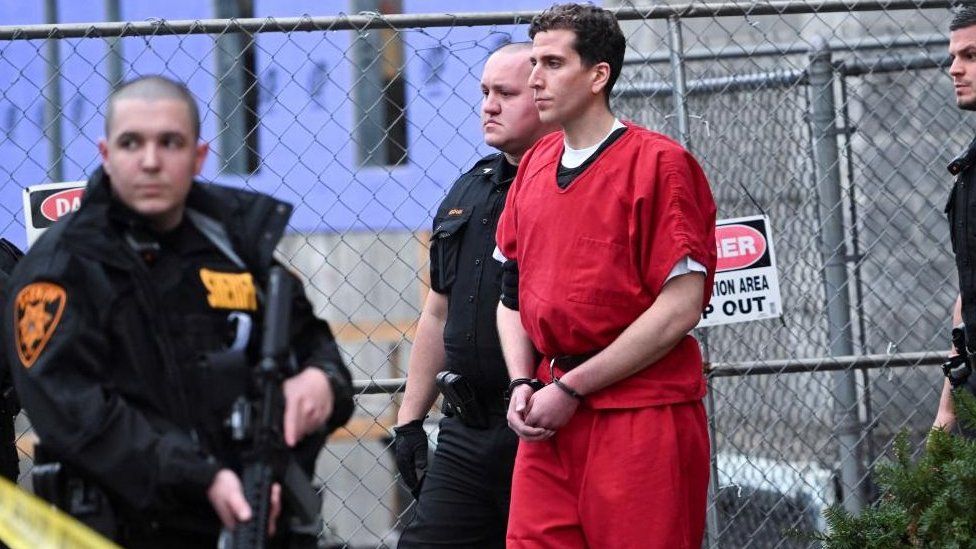 By Holly Honderich and Max Matza
In Washington DC and Seattle

Despite the arrest of a man accused of killing four Idaho university students, investigators have yet to release many of the details about how he was caught.

Criminology student Bryan Kohberger, 28, has appeared in court in Pennsylvania where he told a judge he would not fight extradition to Idaho.

His arrest brought some relief to Moscow, a college town traumatised by the killings six weeks earlier.

But the public has yet to learn what evidence led police to him.

Amid criticism from the community and victims’ parents, police released one lead last month, asking the public for help finding a white Hyundai Elantra. The car was seen near the home where the pupils were found stabbed in their beds.

After the arrest on Thursday, police said that the Elantra had been located. But a murder weapon – described as a “fixed blade knife” – has not been found.

Officials have still said nothing about Mr Kohberger’s alleged motive – or how, if at all, he knew the four victims.

On Tuesday, he was seen arriving at the courthouse in Monroe County, Pennsylvania, wearing a red prison jumpsuit and handcuffs. He did not respond to shouted questions from journalists.

During the hearing, he told the judge that he was not on any medications that would impair his judgement, and mouthed the words “I love you” to his family members that were present, according to ABC News.

The probable-cause affidavit, which would include the reasons for his arrest – will remain sealed until he appears in court in Idaho to formally face charges, according to Bill Thompson, the prosecutor for Latah County, Idaho.

A court-appointed lawyer in Pennsylvania, the suspect’s home state where he is being held, said that Idaho officials will travel there to retrieve Mr Kohberger and bring him back to Idaho “pretty quickly”.

The details of the extradition process are usually kept secret, due to security concerns.

Once he is in Idaho, he will meet with a new lawyer there, and a trial date will eventually be set. Officials have already said they will charge him with four homicides and burglary.

With many details of the case still unknown, attention has been focused on Mr Kohberger’s criminology studies. Officials on Friday confirmed that the suspect was a PhD student in criminal justice and criminology at Washington State University, just a few miles from Moscow.

He had only recently moved to Idaho after graduating with an undergraduate psychology degree earlier this year from DeSales University, a Catholic school in Pennsylvania.

In a post to Reddit that was removed after his arrest, a person identifying themselves as Bryan Kohberger and associated with DeSales sought participants for a research project “to understand how emotions and psychological traits influence decision-making when committing a crime”.

“In particular, this study seeks to understand the story behind your most recent criminal offence, with an emphasis on your thoughts and feelings throughout your experience,” the post said.

Neither police nor the university have not confirmed that the post was made by the suspect.

Kohberger graduated in 2012 from the Pleasant Valley High School in Brodheadsville, Pennsylvania, and later returned to work as a security guard there. A local news report from 2018 mentioned how he helped to save a faculty member’s life there after she suffered an asthma attack.

The suspect’s lawyer, Jason LaBar, told US media that Kohberger’s father had flown to Idaho to drive back to Pennsylvania with him after his semester at Washington State University ended in December. He told NBC that he had spoken to the father about the cross-country drive. “Everything was ordinary, and he saw nothing unusual about it,” he said.

Former classmates told The New York Times that Mr Kohberger was the “black sheep” of his graduate programme, and that he made some fellow students uncomfortable.

In a statement on Sunday, Mr Kohberger’s family said they felt for the Idaho victims’ families, adding that they “will love and support our son and brother… and promote his presumption of innocence”.