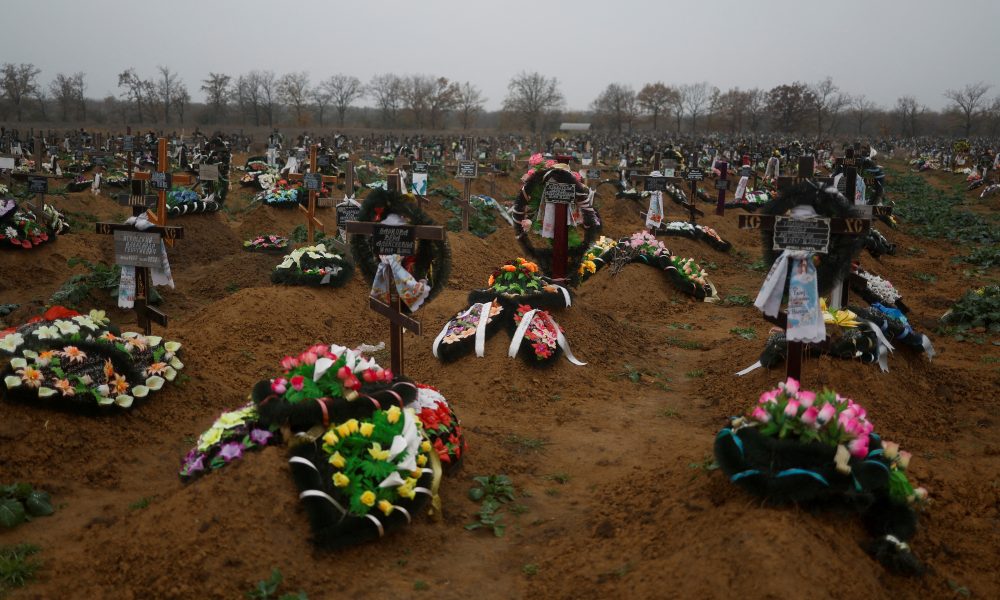 Oksana Minenko, a 44-year-old accountant who lives in Kherson. She claims she was tortured by the occupying Russian troops and held for several times.


According to her, her husband, a Ukrainian soldier, died while protecting Kherson’s Antonivskyi Bridge during the first day of full-scale war. Minenko claims that Russian forces put her fingers in boiling water and pulled her fingernails out. She was then beaten so severely that she needed plastic surgery.

Minenko stated that “one pain became another” while speaking at an improvised humanitarian aid centre in December. Minenko suffered from scarring around her eyes following an eye surgery to fix the damage. “I was a living being.”

Interviews with more than a dozen victims and law enforcement officers from Ukraine as well as international prosecutors supporting Ukraine revealed that the torture methods used included beatings, electric shocks and various forms of suffocation.

Some claimed that prison inmates were kept for as long as two months in cramped cells without sanitation, food or water.

These statements match what the Ukrainian authorities have said about detention conditions. These conditions include detainees being tied and blindfolded, subjected to beatings, electric shockeds and injuries including severebruising, broken bones and forced nudity.

Andriy Kolenko is the chief war crimes prosecutor in the Kherson region. He stated that “this was done systematically and exhaustingly” to get information about the Ukrainian military and suspected collaborators or to punish those who were critical under the Russian occupation.

Moscow denies war crimes and targeting civilians despite declaring that it is conducting an operation military special in Ukraine.

According to Ukrainian law enforcement, the crimes committed in the Kherson area seem more severe than those that are occurring around Kyiv’s capital. The reason is that the area has been occupied for so many years.

Yuriy Belovov is Ukraine’s top war crimes prosecutor. He stated that authorities had identified ten locations in Kherson used by Russian forces for unlawful detention. According to him, around 200 people were tortured or attacked at these locations and 400 more were illegally held there. These figures are expected to increase as the Ukrainian authorities continue their investigation into Russia’s withdrawal from Kherson. This was the Ukrainian capital it captured during its nearly year-long war against its Western neighbor.

Belousov said that nationwide authorities have opened pre-trial investigations into the alleged unlawful imprisonment of more than 13.200 persons. Belousov stated that more than 1,900 investigations were launched into allegations of illegal and ill-treatment.

Russia has accused Ukraine of war crimes. The West, however, was accused of not paying enough attention to them. This includes the claim that Ukrainian soldiers executed Russian prisoner. The United Nations claimed that evidence was available that both sides had tortured prisoners of war in November. According to a U.N official, Russian abuse was quite systemic. Kyiv had previously said it would investigate any abuses by its armed forces.

Minenko believes her alleged torturers targeted Minenko because her husband was a soldier. Minenko claimed that Russian forces came to Minenko’s grave one week after his death, and forced Minenko to kneel beside them.

Minenko claims that in March and April, three men wearing Russian military uniforms with their faces covered by balaclavas visited Minenko’s home at night. They interrogated her and took her into custody. They forced her to change, and beat her. They tied her hands to a chair and covered her head.

Minenko stated that “When you are being beat and have a bag on your head, you can’t breathe, can’t do anything, you can’t defend yourself.”

The February invasion of Ukraine by Moscow triggered Europe’s most extensive land war since World War Two. Russia invaded Kherson in March, and then withdrew its troops from the area in November. It claimed that it was futile for Russia to lose any more Russian blood there.

Belousov claimed that over 7,700 of more than 50,000 war crime reports submitted to Ukrainian authorities were from the Kherson region. According to him, more than 540 civilians remain missing from the region. Kovalenko, the regional prosecutor, stated that some people were forced to flee to Russian-held territory. Children are included.

Belousov said that authorities have found more than 80 bodies. Most of the bodies were civilians, and over 50 had died of gunshot wounds or artillery shelling. Belousov stated that hundreds of civilian corpses had been found in areas where Russian forces left. These include over 800 civilians living in the Kharkiv region, where investigators took longer after Ukraine retook vast swathes.

Nigel Povoas (british attorney), the lead prosecutor of the Western-backed team, which includes legal experts who support Kyiv’s efforts to prosecute war crimes, said that the number of tortured and detained victims “points to widespread, grave crime on Russian-occupied territory.”

Povoas said that the Ukraine was experiencing a pattern in terror and suffering. This confirms the “impression that a wider criminal strategy emanating from the leadership” to target the civilian population.

Kherson man, 35 years old, claimed that Russian forces beat him in August during five-day detention. He was also forced to wear a mask, and was subjected to electric shocks to his ears and genitals. He said that the current strikes are almost like hitting a ball on your head and that you become unconscious. Out of fear of reprisals, he requested anonymity.

He claimed that his captors interrogated him regarding Ukraine’s military activities. This included the storage and use explosives. They believed he was associated with the resistance movement. Andriy claimed that he knew of people who served in the Ukrainian military and territorial defense forces. But he was not one of them.

According to Ukrainian authorities the Kherson office building was one of the largest detention facilities. Authorities claim that more than 30 people were kept in the basement’s warren-like structure, which was used during the Russian occupation to torture and detain. According to authorities, an investigation is ongoing to determine how many people are being held.

The basement was discovered to be contaminated with human excrement and blocked windows. There were also visible signs that Russian forces used torture tools, including metal pipes and plasticligatures. Wires were hanging from the ceiling and were believed to have been used for electric shocks. Authorities believe the notches were used by detainees to track their days and to send messages. One of the notches read, “For Her I Live.”

Liudmyla Shumkova, 47, claimed she was being held hostage at No. 3 Energy Workers’ Street, for most of the 50-days that they were detained this summer. Because they believed he was part the resistance movement, the Russians asked about her sister’s child.

Shumkova, a lawyer in the health sector, claimed that around half a dozen people were held in a single cell without windows or light. She also stated that only one meal was served each day. Although she claimed that she wasn’t physically tortured, she said she was subjected to physical torture by other detainees. This included a female officer from the police force, with whom she shared one cell. She claimed that the torture she suffered was particularly severe for men. They screamed, and it continued every day. It could go on for up to three hours.

Investigators continue to search for those responsible for war crimes, as well as high-ranking military officers. Belousov, the war crimes chief, answered questions about criminal proceedings against torture perpetrators. He stated that more than 70 suspects were identified and that 30 of them had been indicted.

Belousov did not identify the suspects, but stated that most of them were military officers at lower ranks. Some of the suspects are however “senior officers, in particular colonels, lieutenant colonels”, and senior officials in proRussian Luhansk, Donetsk militaries/civil administrations. Representatives of both the proRussian Luhansk People’s Republic and Donetsk People’s Republic declined to answer questions about whether or not their forces were involved in unlawful detentions or torture.

The Kremlin and Russian defense ministry did not respond to questions about the alleged perpetrators.

On a cold December day, war crime investigators visited a village called Bilozerka in the Kherson region to investigate allegations of war crimes. The Ukrainian authorities claim that the courthouse was used to torture and hold people. 300 Russian soldiers also converted the school into a barracks. The “Z” symbol, which became an emblem of support for Russia during World War II, was placed on the walls of the abandoned school.

A small team of investigators took fingerprints and collected DNA samples at the courthouse. To identify the evidence, they also put yellow numbers in a garage near the courthouse. Two prosecutors claimed that the desk chair was found with a pouch of liquid and plastic ties nearby. It looked like the Russian occupants used improvised torture devices to induce a feeling of drowning.

The Kremlin and Russian defense ministry did not respond to questions about torture methods.