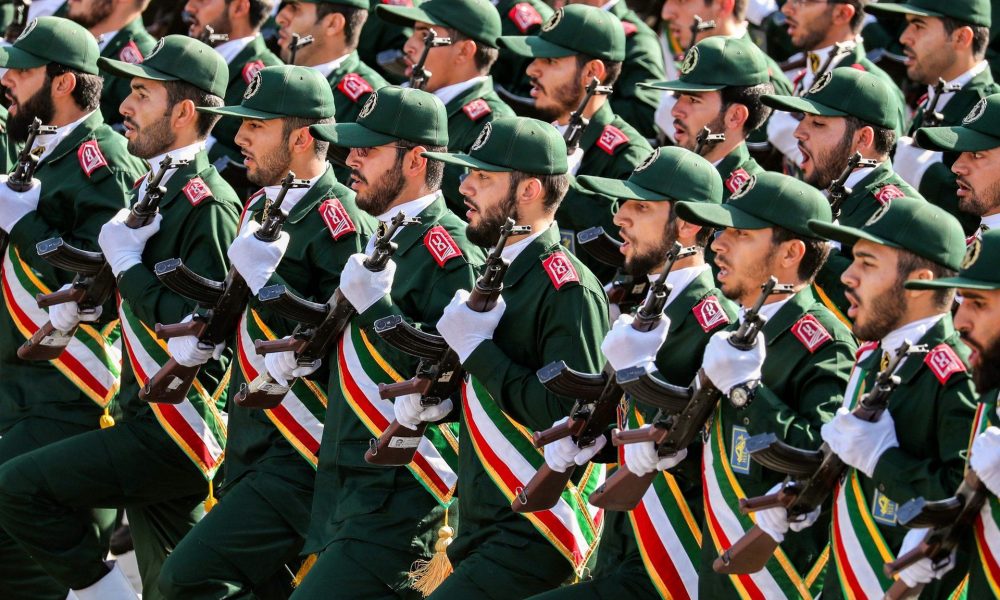 The European Union and its 27 member states are under growing pressure to blacklist the entirety of Iran’s Islamic Revolutionary Guards Corps (IRGC) as a terror entity.

While this proposal has been under consideration for years, there is new momentum and a greater sense of urgency behind it after four months of nationwide unrest that has challenged the very survival of the Islamic Republic. Video clips have highlighted the role of the IRGC and its paramilitary Bassij forces in suppressing young Iranians’ calls for freedom and democracy, and have been broadcast widely the world over.

Meanwhile, Iranian activists have been emphasizing that the IRGC’s crimes are not limited to the recent uprising. Since its foundation in May 1979, the IRGC was tasked with preserving the clerical regime at any cost and to prioritize the suppression of dissent. It led the ruthless campaign to massacre Iranian Kurds in 1980, was involved in the deployment of hundreds of thousands of Iranian children to sweep for mines on the frontlines of the Iran-Iraq war,and planned or commissioned 150 terrorist attacks against the main Iranian opposition, the People’s Mojahedin Organization of Iran (PMOI/MEK) in Iraq from 1993 to 2003.

In 1993, the MEK revealed the existence of the Quds Force, the extraterrestrial arm of the IRGC, in the highly acclaimed book “Islamic Fundamentalism, the New Global Threat”. In numerous press conferences and revelations, it has underscored the undeniable, decades-long role of the IRGC in terrorist acts including assassinating and abducting dissidents.

Using proxies of the Quds Force, the IRGC planned and executed the murder of 141 MEK members in Iraq from 2009 to 2016, including 52 unarmed residents of Camp Ashraf, MEK members, who were massacred in September 2013.

The IRGC has played a key role in domestic repression as well. Upon the direct order of Supreme Leader Ali Khamenei, it killed over 1,500 protesters during a nationwide uprising in November 2019.

Iranian activists have long maintained that the ruling theocracy’s strategy for its survival relies on two pillars: suppression at home and export of terrorism abroad.

The IRGC, its Quds force, and proxies have extended their reach throughout the Middle East and Europe and into the United States merely to draw attention away from its lack of capabilities to solve social and economic problems at home. The massacre of Syrian people, the Yemeni conflict, it’s meddling in Iraq, funding of the Hezbollah in Lebanon, and numerous cases in Europe are all examples of the IRGC directing terrorist acts. The Quds Force has conducted many terrorist operations in various countries in North America, Europe, the Middle East, Asia, and Africa.

According to the fact sheet of the United States Department of State, the IRGC was designated in its entirety as a Foreign Terrorist Organization because it:

In April 2019, Maryam Rajavi, the President-elect of the National Council of Resistance of Iran (NCRI), reiterated the necessity of listing the IRGC as a terrorist organization. She recalled that the Iranian Resistance had declared many times before that the terrorist listing of the IRGC in its entirety is imperative for peace and security in the Middle East.

A similar understanding is noted among others concerned about the situation in Iran. Agnes Callamard, Amnesty International’s Secretary-General, said on September 30, “Without determined collective action by the international community, which needs to go beyond mere statements of condemnation, countless more face being killed, maimed, tortured, sexually assaulted or thrown behind bars solely for their participation in protests.”

Blacklisting of the IRGC has also been suggested by many representatives of the E.U., United States, and Canada. An “Early Day Motion” in the U.K. House of Commons, signed by 37 M.P.s in 2017, “notes that IRGC’s Qods Force is already proscribed as a terrorist organisation; agrees with the NCRI President-elect, Maryam Rajavi, that restricting the IRGC’s resources and funds are in the interest of the Iranian people as well as regional peace and security; believes that the long-term interests of U.K. and the Iranian people converges with regards to countering and limiting the IRGC’s unacceptable behaviour; and calls on the Government to proscribe the IRGC and Iran’s Intelligence Ministry as foreign terrorist organisations in their entirety.”

The European Parliament is due to discuss the blacklisting of the IRGC this week.

According to Iranian activists, most notably the NCRI, the blacklisting of the IRGC is long overdue. Sanctioning figureheads and entities within the IRGC or its affiliates have not and will not effectively impact the IRGC’s activities.

The activists maintain that failure to proscribe and list the IRGC as a terrorist entity would only emboldened the IRGC to carry out more terrorist activity, as well as more crimes against humanity Any further procrastination would undermine European countries’ credibility.