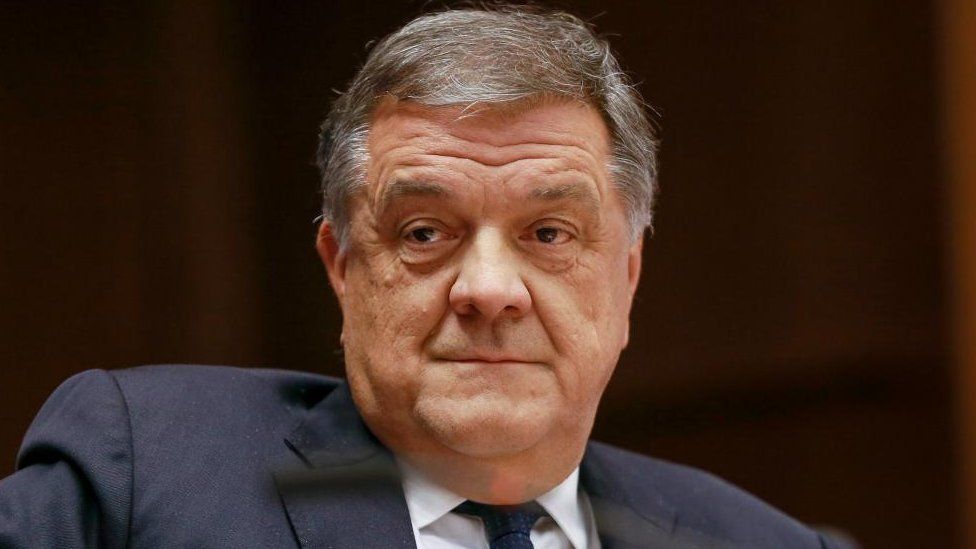 An alleged leader of a criminal network involved in an EU corruption scandal has agreed to reveal which countries were involved and how it operated.

Prosecutors said Pier Antonio Panzeri agreed the plea deal under an informant law used only once before in Belgium.

The former member of the European Parliament is one of four suspects being held in Belgium.

They are suspected of accepting bribes from Qatar and Morocco in return for influencing the Parliament in Brussels.

Qatar has strenuously denied that it tried to gain influence through gifts and money while Morocco has also strongly rejected allegations that it sought influence on issues such as fishing rights and the disputed status of Western Sahara.

The four suspects were charged last month after police seized around €1.5m (£1.3m) in cash during a series of raids on a flat, a house and a hotel. Pictures of stashes of €200, €50, €20 and €10-denomination notes were released by police, including a suitcase found in the hotel which was stuffed with cash.

The other suspects include a serving Greek MEP, Eva Kaili, who has been stripped of her role as a vice-president of the Parliament, her partner Francesco Giorgi, and lobbyist Niccolò Figà-Talamanca.

After Mr Panzeri, 67, left the Parliament he became the head of a lobby group called Fight Impunity. Mr Figà-Talamanca worked from the same building in Brussels for a separate NGO.

According to a statement from Belgium’s federal prosecutor, the former MEP agreed to the plea bargain under a law modelled on an Italian provision for repentant mafia members or “pentiti” to turn state witness.

A spokesman said he faced a year in jail, rather than a “much heavier prison sentence”, as well as a fine and confiscation of €1m in assets.

In return he would be required to give details of how the network operated, what the financial arrangements were with the countries concerned, and “the involvement of known and unknown persons within the investigation, including the identity of the persons he admits to having bribed”.

The plea deal was released a day after an Italian court agreed to extradite the ex-MEP’s daughter, Silvia Panzeri, 38, on suspicion of involvement in the scandal.

The same court in the northern city of Brescia ruled last month that Mr Panzeri’s wife, Maria Colleoni, could also be extradited, but Italy’s top appeal court will give a final ruling on their case. The two women are currently are house arrest and deny allegations of corruption and money laundering.

Greek MEP Eva Kaili, who also denies involvement in the case, is suspected along with the others of taking bribes from Qatar in return for influencing EU policy-making.

Her partner Francesco Giorgi was reported to have confessed last month to his role in the affair.

However, Mr Panzeri’s reference to unknown people within the investigation suggests more revelations are due to emerge.

Lawyers for both MEPs have denied that they played any part in the scandal but the request is being reviewed by Parliament’s legal affairs committee.